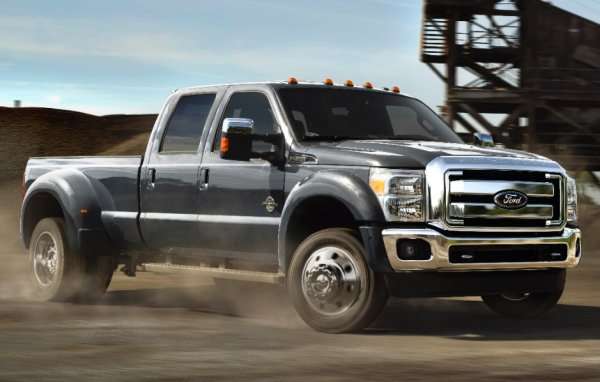 The latest shot heard round the auto industry came today as Ford Motor Company announced that the 2015 F Series Super Duty lineup will feature a revised 6.7L PowerStroke diesel that will have more horsepower, more torque and the highest towing capacity in the class – although there is a catch of sorts.
Advertisement

The 2015 Ford F250, F350 and F450 will all feature a new 6.7L PowerStroke diesel that will offer 440 horsepower and 860lb-ft of torque. Those numbers are up significantly from the 400 horsepower and 800lb-ft of torque offered by the 2014 model year Super Duty Ford trucks. This increase in power was achieved by adding a larger turbocharger and new fuel injectors that will do a better job of introducing the fuel to the engine in a fine mist. Best of all, these changes for the 2015 Ford F Series Super Duty lineup make that bigger power without negatively impacting fuel economy or emission levels.

“The 6.7-liter Power Stroke was already a stout engine,” said Robert Fascetti, Ford vice president powertrain engineering. “The improvements we’ve made essentially give Super Duty customers an engine designed for our larger F-650 and F-750 trucks. They may not realize how tough this engine really is.”

“Our chassis people work in unison with our powertrain people to develop more than a great truck, it’s a machine engineered for work,” said Doug Scott, Ford Truck group marketing manager. “We’re the only manufacturer that develops and builds our own powertrains in this class and when you combine that with a chassis that’s purpose-built for best-in-class power and torque, you can feel the result in the way it drives, especially when towing big loads.”

In addition to being the top dog in terms of horsepower and torque, Ford is bragging that the 2015 F Series Super Duty lineup will have the highest towing capacity in the class with a max tow rating of 31,200 pounds…but there is a catch. This towing figure applies to the F450 while best in class towing ratings are typically based on the 1-ton (F350) trucks. For instance, the 2014 Ram 3500 with the High Output Cummins is capable of towing 30,000 pounds and that figure made the Ram the most capable consumer grade pickup on the market. Ford has chosen to use the F450 – a truck that is far less common than the F250, F350 or any of the competing trucks from Ram or General Motors outside of the commercial market – to stake their claim for the best towing capacity in America.

The 2015 Ford F350 with the powerful new 6.7L PowerStroke can tow 26,500 pounds when properly equipped so in terms of “normal” consumer grade pickups, the Ford Super Duty still trails the Ram brand. For the record, the 2015 Silverado 3500 HD has a maximum towing capacity of 23,200 pounds. The 2015 F350 with the max towing package that can pull 26,500lbs is equipped with unique front springs and a wide track axle while the new F450 features commercial grade 19.5 inch tires, stronger U-joints, beefier rear leaf springs, new shocks, a stronger steering gear and a heavier duty gooseneck/5th wheel setup.

It will be interesting to see how the Chrysler Group reacts to the news of Ford Motor Company claiming the top towing capacity in the segment. Those published claims have always been based on 1-ton level (Ram 3500, Silverado 3500, F350) so Ford is kind of breaking protocol by staking their claim on the F450. The Ram Brand could just remind us all that their 3500 can still pull more than the 2015 F350 – or Ram will rework things a little for the 2015 model year to further improve towing figures. I would expect that Ram will improve the towing capacity of the higher volume Ram 3500 rather than working to improve their slower selling 4500 to compete with Ford’s F450.

I would also fully expect to see the Chrysler Group tweak their 6.7L Cummins Turbo Diesel for the 2015 model year to close the gap between itself and the PowerStroke – if not overtake the Ford diesel mill.

Dale wrote on March 11, 2014 - 9:39pm Permalink
Interesting information. It is nice to see the competition between the big three giving us better trucks. What I would be most interested in though is the towing capacity and MPG of the F350 and 3500 with single rear wheels, not the dual wheels, as this is what most people buy. Regardless, it looks like the transmissions should be much better than past models, if the dual wheel version can handle 30k plus.
Rodney Driggers wrote on November 22, 2014 - 1:17pm Permalink
How can you compare the ratings of a 450 which has a lower gear ratio and heaver springs to a 350 and then claim the best in class towing.Another lie by Ford i have a 2012 ford edge that they claim gets 30 mpg but the best we ever a gotten is 24 and that was in Florida, unbelievable.
SDavis wrote on February 17, 2015 - 11:02am Permalink
The EPA estimates mpg not Ford. That's why it says EPA estimated mpg
Klaudia wrote on May 10, 2020 - 11:14pm Permalink
Thanks for the marrvelous posting! I genuineoy enjoyed reading it, you wilkl be a great author.I will make sure to bookmark your blog and will come back someday. I want to encourage you to definitely continue your great work, have a nice morning! wardrobes in the bedroom corner wardrobe in the hallway
Jody wrote on March 10, 2022 - 7:42am Permalink
avax yorum usd destek direnç noktaları Avalanche, değişik alanlardan kullanıcıların gerçekleştirmek isteyeceği türlü finansal işlemlere imkân sunmayı amaçlıyor. Kripto nakit borsasının en önemli faktörlerinden biri olan AVAX ise, avax değerlendirme yapan analistlere nazaran piyasada yaşadığı dalgalanmalar sebebiyle geleceğine müteveccih belirsizliğini sürdürüyor. avax yorum avax yorum Sırları
Joe Montana wrote on December 19, 2014 - 6:02pm Permalink
Rodney, please don't compare your escape to heavy duty trucks.
Tim Ameis wrote on January 21, 2015 - 10:10pm Permalink
I have driven all the American pick-up trucks mostly Ford trucks. Ford is the best and most solid truck. Driven them 6 to 7 days a week. Start and stop over 40 times a day. The chevy trucks I have driven is like being in a car. Weird