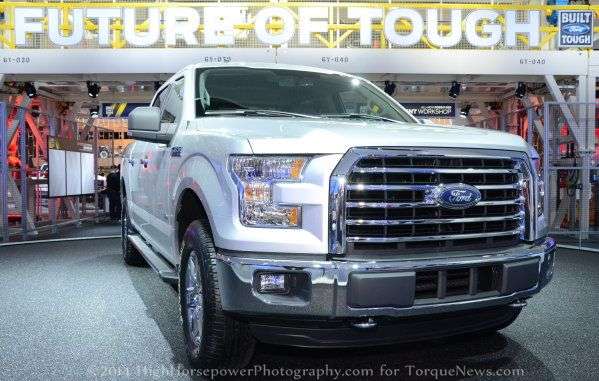 Since Ford Motor Company introduced the redesigned 2015 Ford F150 at the 2015 Detroit Auto Show with a heavy dose of aluminum body panels, the automaker has been stating that the next generation half ton pickup will be around 700 pounds lighter and depending on which models are 700lbs lighter we could see a 2015 F150 that weighs under 4,000 pounds – which would be an incredible milestone for the full size truck segment.
Advertisement

Ford Motor Company has stated more than once that the use of aluminum body panels will help make the 2015 Ford F150 pickup 700 pounds lighter than a comparable truck using steel for those same components. Provided that the rest of the 2015 F150 is comparable in weight to the current 2014 Ford F150, that 700 pound reduction in weight would put certain packages below 4,000 pounds (curb weight). It should be noted that Ford hasn’t specified exactly how that 700 pounds has been cut but based on the tricks of automotive marketing experts, there is a chance that the 700 pound figure is the best case scenario.

In other words, the largest 2015 F150 pickups – which will have the largest aluminum body panels – will likely be the trucks that are 700lbs lighter than a comparable truck with a steel body.

The heaviest current non-SVT Ford F150 pickup is the 4x4 SuperCrew with a 6.5 foot bed and the 6.2L V8 engine which weighs 5,904 pounds. Cutting 700 pounds from that truck would put it down around 5,200 pounds and that is if Ford hasn’t implemented any other weight-saving efforts. That same truck without four wheel drive has a curb weight of 5,607 pounds so cutting 700 pounds would put the biggest Ford F150 under 5,000 pounds and that would be a significant figure. That same full size F150 with the biggest cab, the biggest bed, rear wheel drive and the EcoBoost V6 could drop from 5,380 to 4,680 pounds and that would make the most powerful and most efficient F150 even more efficient.

At the same time, when you consider the fact that the lightest 2014 F150 – the Regular Cab, 4x2 with a 6.5 foot bed and the 3.7L V6 engine – weighs just 4,685 pounds, cutting 700 pounds would push the curb weight down under 4,000 pounds. The EcoBoost regular cab F150 could weigh around 4,400lbs which would certainly allow the owner to make the most of the powerful twin turbocharged V6.

Considering the push for better fuel economy from pickups, it is almost guaranteed that Ford has used some other materials inside and out that will bring down the curb weight of the 2015 F150 such as high strength steel in the chassis and lighter weight materials throughout the cabin. Those weight saving efforts – combined with the heavy use of lightweight aluminum body panels – could allow the 2015 Ford F150 to be the most capable and the most efficient half ton truck lineup sold in America.