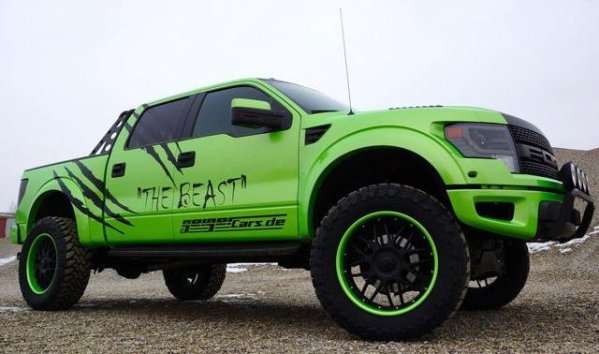 The Ford SVT Raptor F150 is unquestionably one of the most hardcore trucks to ever hit an American showroom, but German tuner Geiger Cars has put together a complete build package for the Raptor to turn it into a near-unstoppable monster which they have appropriately named “The Beast”.
Advertisement

The Ford SVT Raptor F150 comes from the factory with one of the most powerful engines available in a truck in the US market and a suspension system that is more advanced than anything that we have ever seen on a factory production pickup. That Raptor offers more offroad performance than any modern truck from any company doing business in the US, but there come times when those factory components meet their limitations. That is where the folks at Geiger Cars have stepped in to make the new Raptor even more unstoppable and to make sure that everyone who beholds this modified F150 knows that it is special – Geiger has named this tuned Raptor “The Beast”.

The Geiger Cars Beast package for the Ford F150 Raptor begins on the outside where a stunning bright green paint job (which looks a great deal like Ford’s Gotta Have It Green” has covered pretty much the entire truck, including portions of the wheels. Geiger than added a matte black painted portion of the hood and roof, black graphics along the sides, a black tonneau cover, black step bars, a black push bar and a black rollover bar to form a gorgeous contrasting livery. Finally, a set of 22 inch black wheels with a bright green lip have been wrapped in Toyo Open Country offroad tires and mounted up to this wicked F150.

The Geiger tuned Raptor F150 looks incredible but the real story is in the performance modifications. Geiger first added a suspension lift package that allows the huge tire/wheel combo to fit comfortable while also allowing for more ground clearance. More importantly, Geiger has added a 2.9L Whipple supercharger package that increases the output of the 6.2L SVT V8 from 411hp and 434lb-ft of torque to a whopping 572 horsepower and 525lb-ft of torque. That should be more than enough to make it one smokin’ fast truck whether it is on the road, in the desert or in the woods.

Of course, having a Raptor that is this heavily modified doesn’t come cheap. The conversation from Geiger to turn your run of the mill Ford SVT Raptor F150 into The Beast starts at 99,500 Euros – or about $136,375 US dollars back on the current conversion rate. That price does include the base price of the Raptor ($48,510 in SuperCrew form as shown above) so technically the Geiger package “only” costs $87,865. That is a whole lot of money for a paint job, wheels, tires, a suspension package, a rollover bar, a push bar, a bunch of fog lights and a supercharger package…but there is no question that the result is very impressive.

I have become a green exterior paint lover over the past few years and one of my all time favorite factory green cars is the modern Boss 302 Mustang in Gotta Have It Green so the similarities to that shade of Geiger’s Beast F150 Raptor is a real work of art… in my opinion. I love the stance, I love the colors that the German tuner picked and I love the fact that this beefed up Raptor makes such huge power. Geiger has made a name for itself by improving already very impressive American performance vehicles and The Beast F150 Raptor is a fine addition to the German tuner’s lineup.