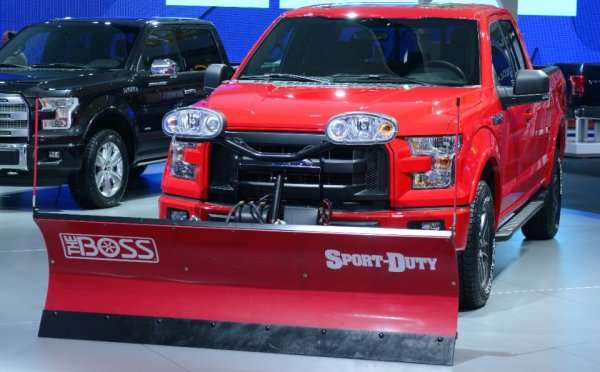 Ford Motor Company has announced that when the 2015 Ford F150 hits dealerships, buyers will be able to order a factory snow plow prep package in regular cab, SuperCab and SuperCrew configurations – making the next generation F150 the only half ton truck sold in America with a snow plow option across its entire lineup.
Advertisement

The odds are very good that if you have a snow plow company (or a guy down your street) who clears your parking lot at home or driveway at work, they probably rely on a heavy duty model like a Ford Super Duty but that could change when the 2015 Ford F150 hits dealerships around the country. Ford announced today that all cab configurations for the next generation F150 will be available with the snow plow prep package so whether you are buying a the smaller Regular Cab, the midsized SuperCar or the full four door SuperCrew you will be able to order a snow plow prep package from the factory – making the 2015 F150 the first half ton truck sold in America to offer a plow package across an entire lineup.

“The new 2015 F-150 is the toughest F-150 ever, and by using more high-strength steel in its frame and advanced materials in the body, we’ve made the new truck up to 700 pounds lighter,” said Eric Peterson, Ford F-150 marketing manager. “This leads to more capability and better handling, which is exactly what you’d want for plowing. Adding a snow plow prep kit to our lineup helps ensure our customers have even more tools at their disposal to get the job done.”

While the 2015 Ford F150 will be available with the new snow prep package across all three trimlines, there are a few specific features that buyers will have to pick in order to have their next generation F150 prepared from the factory to accept a snow plow. Of course, the F150 must be equipped with four wheel drive but interestingly – this new package is only offered with the 5.0L V8. Ford has designed the mighty EcoBoost V6 to be their go-to engine with the most horsepower, the most torque, the highest towing capacity and the greatest hauling capacity in the F150 lineup so I am pretty surprised that the EcoBoost isnt offered with the snow plow package. I am also pretty surprised that the 6.2L V8 isnt mentioned but I guess that Raptor owners who want to push snow will have to rely entirely on the aftermarket.

Just to be clear, those 2015 Ford F150 buyers who order the snow plow prep option wont get a truck with a plow – they will get a truck with controls and wiring for a plow system. Once the buyer gets his or her new F150, they will have to take it to a shop to have the actual plow hardware installed but this factory-equipped preparation package will allow the 2015 F150 to handle a light duty plow weighing up to 450 pounds.

This announcement – or some announcement pertaining to the world of snow plowing – was almost expected after the company introduced the 2015 Ford F150 at the Detroit Auto Show with one of the trucks hooked to a large snow plow assembly. Typically, most people who do any snow plowing would opt for the larger Super Duty models but with the increasing shift by half ton trucks to do work previously reserved for the ¾ or 1 ton pickups, the 2015 F150 is the first half ton truck in America to offer the ability to plow snow to so many buyers. This is good news for the rest of us as more and more private truck owners will be able to buy a plow to clear our parking lot or driveway and with more people offering those services, the costs should come down a bit.

Ford Motor Company hasn’t announced the pricing for the 2015 F150 plow package but it should be available right away when the new half ton Ford pickup arrives towards the end of 2014.