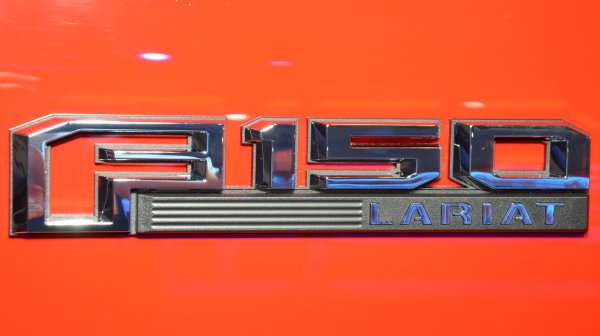 Last week we looked at the growing concern that the 2015 Ford F150 will be more expensive to both insure and repair due to the high tech aluminum body panels but to put those fears to rest, Ford Motor Company is offering an aluminum repair tooling package at a discount to those dealerships with body shops that want to be able to work on the next generation F150.
Advertisement

As we discussed last week, the 2015 Ford F150 relies on a collection of lightweight aluminum body panels that allowed the Motor Company to cut some 700 pounds from the next generation F Series pickup. That will allow the new F150 to be more efficient and more powerful but those lightweight panels come with one massive downside – aluminum body panels require special tools, special facilities and special training to repair in the event of an accident or any other body damage. Ford points out that these aluminum panels are more dent resistant than tradition steel body panels but in the event that an aluminum panel is damaged, it will take a specially outfitted body shop to repair said damages.

The problem for owners and insurance companies is that body shops which are prepared to repair aluminum body panels can spend anywhere from $30,000 to $50,000 in tooling, facility upgrades and training to fix these items correctly. That high cost prevents many shops from offering aluminum repair services which makes aluminum repair an elite service and that elite service comes with an elite price so when owners of the 2015 F150 damage their truck’s body, it will cost more to fix the damage than similar damage on a 2014 F150. More importantly, aluminum repairs will also cost insurance companies more money and that translates to higher insurance rates and lower residual values but Ford is taking steps to help reduce the financial impact of the lightweight body panels.

Announced at the National Automobile Dealers Association conference, Ford Motor Company has launched a program that will allow their dealerships with body shops to purchase the tools needed to work on the 2015 F150 pickup at a significant discount. Items like aluminum specific welding setups, rivet guns, air filtration systems that pull the harmful aluminum dust from the air and special aluminum repair work stations can be purchased from Ford as a unit with savings reaching $10,000 for the dealership or roughly 20% of the cost of those items outside of the Ford program. Dealerships have until October 31st to sign up for this program and there is a good chance that many dealers will jump on the chance to save $10,000 on the aluminum body shop tools. Having more dealerships properly equipped to repair the 2015 Ford F150 pickup will translate to lower repair costs and hopefully lower insurance rates on the next generation F150.

While it might seem crazy for a dealership to spend $30,000-$50,000 on body shop components just to fix the 2015 Ford F150, everyone should keep in mind that Ford sold over 700,000 new F Series pickups in 2013 and those numbers continue to grow. Should the 2015 F150 return the fuel economy and capability levels that we all expect, the F150 will continue to be America’s bestselling vehicle so it could be vital for Ford dealerships to be able to fully service their most popular vehicle. Also, it is all but guaranteed that more Ford Motor Company vehicles in the coming years will feature these weight saving aluminum panels so with more and more vehicles needing these special tools – it is a good bet that many Ford and Lincoln dealerships will be quick to take part in this discount program.

In the long run, this decision is more about putting prospective customers’ minds at ease when considering the 2015 Ford F150 and making a move that will likely reduce repair costs and insurance costs will almost surely help the Motor Company sell even more copies of the next generation F150.

John Goreham wrote on January 28, 2014 - 11:01am Permalink
I said it before in another story, but I think this is great. My current and former sports cars had a lot of Aluminum parts and if Ford can expand the overall service network for aluminum I am psyched.