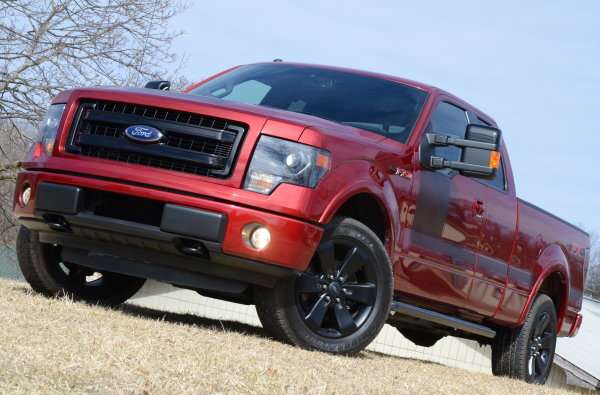 Sales numbers for the 2013 calendar year are in and for the 32nd straight time, the Ford F Series pickup is the bestselling vehicle in the United States with an incredible year-end total of nearly 800,000 new trucks sold – while the Toyota Camry moved over 408,000 new models to claim the title for the top car.
Advertisement

The Ford F Series pickup has been America’s bestselling vehicle for 32 straight years and America’s bestselling truck for 37 straight years so it doesn’t come as any surprise that the unstoppable family of Ford trucks is once again the sales king for the US auto industry. Ford Motor Company sold 793,402 examples of the F Series pickup through 2013, allowing it to beat the second place Chevrolet Silverado by nearly 313,000 votes. Ford sold 148,086 more trucks in 2013 than they did in 2012 – an improvement of 18.3%. For comparison, Hyundai sold 720,783 vehicles in America last year so Ford sold about 10% more F Series trucks in 2013 than Hyundai sold cars, SUVs and minivans. In total, Ford averaged a new truck sold at the rate of roughly one every 40 seconds with an average monthly rate of 66,116 trucks sold per month.

For those of you wondering if General Motors sold more trucks than the Ford F Series when combining the numbers for the Chevrolet Silverado and the GMC Sierra – the answer is no. Chevy sold 480,414 Silverado pickups while GM sold just 184,389 Sierra pickups for a total of 664,803 GM trucks sold during 2013 so even if every GM truck buyer in 2013 bought one or the other, they would have still trailed the Ford F Series.

The Chrysler Group’s Ram truck climbed from 7th in 2012 to 5th in 2013 with 355,673 trucks sold – up from 293,363 the year before. Among the trucks those models outside of the top ten in total sales included the GMC Sierra with 184,389 units sold (4th in the truck class) while the Toyota Tacoma rounded out the top 5 pickups with 159,485 units sold. The Toyota Tundra ranked 6th in America pickup sales with 112,732 units sold. Ford had already sold more trucks in the first 10 weeks of the year than Toyota sold Tundras all year long.

The Toyota Camry ranked third in total US sales behind the Ford F Series and the Chevrolet Silverado with 408,484 new sedans sold but more importantly – the Camry was the bestselling car in America for the 12th straight year. The Camry beat out the Honda Accord for the top car spot by 41,806 units. Those two finished 1-2 in each of the past few years as well but the Accord (4th overall) closed the gap by a significant amount after the Camry beat the Honda by more than 73,000 units in 2012.

The full list of the top ten sales leaders for the 2013 US auto industry is available below with the vehicles’ 2012 rank in parentheses. Congratulations to Ford Motor Company for having the bestselling vehicle in America for the 32nd straight year and to Toyota for offering America’s bestselling car for 12 years straight.