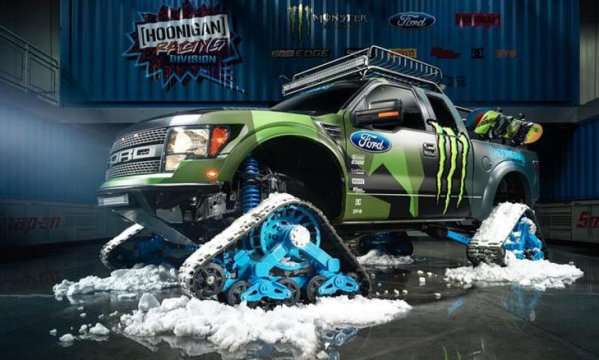 Ken Blocks RaptorTrax is the Most Unstoppable Ford F150 Ever

Ken Block and his Hoonigan Racing Division have introduced their latest masterpiece with the new Ford F150 RaptorTrax – a heavily modified version of Ford’s SVT Raptor F150 that is likely the most unstoppable F150 in the world.
Advertisement

Ken Block is best known for taking his super tuned Ford Fiesta rally car and throwing it sideways through some of the tightest spots possible but his latest project shifts away from the world of gymkhana or even rally racing – instead focusing on converting a new Ford F150 Raptor into a truck that can drive over pretty much anything. This was achieved by removing the standard SVT beadlock wheels and hefty offroading tires to make room for the “Mattracks” that now fill each wheel well. Once those tank-like tracks had been added to the Ford Racing prepared Raptor F150, there probably aren’t many obstacles in the world that Block’s RaptorTrax cannot climb over or push through.

"This project is something I've had in my head for awhile now," said Ken Block about his new F150 Raptor. "I absolutely love my daily driver Ford Raptor, especially since I live out here in the mountains of Park City, so to build out this mountain assault vehicle with a Raptor as the base platform made total sense to me. It's an absolute beast of a machine and I'm stoked with how it's turned out. Next up is for me to take it deep into the backcountry ASAP to help me and some friends slay some powder on our snowboards for a video project due out later this year."

While the biggest attraction with Ken Block’s Ford F150 RaptorTrax is the heavy duty track system that has replaced the wheels and tires, this is far from a “normal” Raptor with some interesting wheel replacements. In addition to the roof basket, the snowboard rack in the bed and the massive light bars on the roof and across the front end, Block’s custom Raptor features Recaro racing seats to keep everyone firmly planted during periods of extreme hoonage while a Ford Racing Whipple supercharger helps the Raptor’s SVT prepared 6.2L V8 make enough power to forged through just about any footing – and it can do that in a big hurry. There are also some “fun features” to allow Block and his buddies to make the most of their trips into the Utah wilderness including an interior storage space for food and beverages along with an exterior speaker system to blare the tunes while hooning…responsibly of course. Finally, this beast of an F150 has a winch in case someone actually gets it stuck but more realistically, the winch is there to pull others out of a jam.

This isnt Ken Block’s first attempt at a track-powered vehicle as while working under his old contract with Subaru, Block and the Subaru Rally Team teamed up to create a rally-prepped WRX STI with tracks that may have been a touch quicker and more nimble but it’s hard to argue the awesomeness of a supercharged SVT Raptor F150 with snow tracks on all four corners. That track-equipped STI was cool but it was far from a track equipped and blown Raptor.

The new Ken Block Ford F150 RaptorTrax will be on display at the upcoming Winter X Games in Aspen Colorado but the good stuff will come later this year or early next year when Block will release a video of him raising some hell in this super modified Ford F150. I’m expecting the adrenaline fueled goodness of his gymkhana videos but rather than watching him smoke the tires as he blasts around a mixture of paved and dirt surfaces – the F150 RaptorTrax video should feature plenty of snow and mudslinging in the mountains around Block’s Utah headquarters.

We can hardly wait to see this wicked Ford F150 in action so hopefully Ken drops that video sooner rather than later.