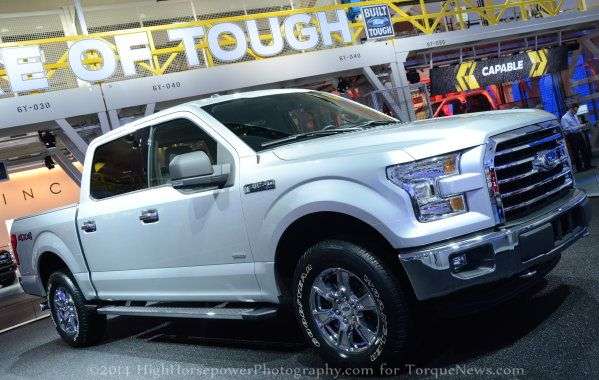 Lightweight Body of 2015 Ford F150 Could Lead to Higher Costs

The recently introduced 2015 Ford F150 uses copious amounts of aluminum in the body panels to allow the next generation F150 to be a whopping 700 pounds lighter but the downside of this lightweight body is likely to be higher insurance costs stemming from higher repair costs when those aluminum panels are damaged.
Advertisement

The body panels that Ford has introduced for the 2015 F150 truck are largely comprised of aluminum and that makes this new half ton pickup about 700 pounds lighter than comparable outgoing models. The problem as many consumers see it is that aluminum is a lighter, “softer” and less durable metal so the body might be flimsier than a steel body.

Ford insists that these new aluminum body panels are actually more resistant to dents and dings so 2015 F150 owners will have to worry less about minor damages. The problem is that no vehicle is safe from more serious damages and when these aluminum bodied F150 pickups sustain more severe damage – it will cost more to repair these trucks than would similar damage to an F150 with a steel body.

The problem is that repairing aluminum body panels like the ones on the 2015 Ford F150 requires body shops to have special tools and special training. The tools used to fix a steel fender or door cannot safely be used to fix that same panel made out of aluminum and the techniques used to fix steel panels cannot always apply to fixing aluminum panels.

Because of that, only about 10% of the body shops in America are approved to repair aluminum bodied vehicles and offering a service with such limited availability equals a higher price. That higher price to fix parts of the 2015 F150 applies to both private owners and insurance companies alike so not only will it cost the owners more to fix their trucks – it will also cost more to insure these trucks since damages will cost the insurance companies more.

Ford recognizes that these aluminum bodied 2015 F150 pickups could cost around 10% more to repair and while that seems a bit optimistic to me, Ford stands by their numbers and they believe that these increased repair costs will be offset in the consumers’ minds by improved fuel economy and towing/hauling capabilities.

Ford also points out that all Ford dealerships and Ford-approved repair shops will be prepared to repair the aluminum body panels of the new F150 and because of that, 80% of its customers live within 30 minutes of a body shop approved to fix aluminum body panels. In the end, Ford Motor Company has stated that the 2015 Ford F150 will have repair and insurance costs that are competitive with other trucks in the half ton segment.

Since the company also points out that it will cost around 10% more to repair these trucks than the current F150 pickups, I would guess that their comparison to other trucks in the segment includes some handy math that factors in improved fuel economy and such.

Regardless of whether or not the 2015 Ford F150 costs more to insure and repair in the event of an accident, we know that the aluminum body will cut around 700 pounds and that translates to better fuel economy and better use of the available power – which means that the next generation F150 will likely be able to tow and haul more weight with similar drivetrains.

With that in mind, I expect that the F150 will continue to lead the US auto industry in sales for years to come and as more body shops scramble to brace for an influx of aluminum bodied vehicles, the costs of repairing these trucks will come down so the concern of higher repair costs will fade while the concern of fuel economy and capabilities will never go away.

John Goreham wrote on January 24, 2014 - 12:11pm Permalink
Tesla owners have recently reported issues with having basic body panel repairs done, even in aluminum intensive markets like California. However, looking at the bright side, the F-150 being THE most popular vehicle in North America, it looks like folks like me with an aluminum Lexus (hood, trunk, roof etc.) will begin to benefit as more and more shops update their tools and methods to service these types of vehicles.