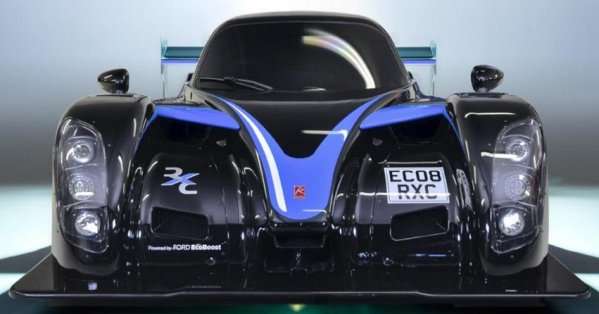 The first street legal 2014 Radical RXC has arrived in the United States with a standard Ford Mustang engine and an optional Ford F150 engine working together to offer American buyers one of the fastest cars in the world…all with American powerplants.
Advertisement

The Radical SR and SR8 have proven themselves at the Nurburgring in Germany as some of the fastest street legal cars in the world but Radical cars didn’t get as much credit in the US because they weren’t legal for road use – until the company introduced their new Radical RXC. Unlike the SR and SR8, the new Radical RXC has a closed cockpit design so it makes a far more realistic road car for Americans. Anticipating more interest from the US market, the British automaker went through the process of making the RXC street legal in California. Now that Radical has gotten the RXC approved for use in California –arguably the toughest state in the US to get a car approved for registration – the company can begin marketing their super high performance sports cars to American buyers.

Helping the new Radical RXC is a pair of engines sourced from Ford Motor Company. The standard Radical RXC is powered by the same 3.7L V6 that will serve as the base engine for the 2015 Ford Mustang but for use in the RXC – that TiVCT V6 has been souped up to the tune of 380 horsepower and 320lb-ft of torque. While that is a fair increase in power compared to what is offered by the base Mustang but when you consider the fact that the RXC weighs a shade under 2,000 pounds – it doesn’t take much power to make for a very, very fast car. The naturally aspirated “base model” Radical RXC can dash from 0 to 60 miles per hour in 2.8 seconds en route to a top speed of 175 miles per hour.

The new option for this sleek sports car is the new Radical RXC Turbo. This version packs the 3.5L EcoBoost V6 that powers the Ford F150, the Ford Taurus SHO and a variety of other FoMoCo vehicles but thanks to a handful of modifications, the Ford EcoBoost V6 packs 454 horsepower and 500lb-ft of torque into the 2,072 pound RXC Turbo. This extra power helps the RXC Turbo to rip from a standstill to 60 in 2.6 seconds with a top speed of 185 miles per hour.

“From the outset the RXC was devastatingly fast, but we designed it to handle even more power,’ said Radical’s Phil Abbott. ‘We have had a great first year with the RXC and it has been very exciting to have been working with Ford. The upper management have given us a lot of support and have allowed us access to a huge amount of technical back up that you can only get when working with a major manufacturer. Our designers and engineers have been able to work with the key EcoBoost engineers to perfect the performance for our car. I know how good the RXC is, and I also know how capable the 3.5-litre EcoBoost motor is too. Together they make a devastatingly complete package.”

The Radical SR and SR8 officially hold the two best lap times ever by a street legal car at the Nurburgring but those numbers are often downplayed because those two models aren’t street legal in very many places. Although the new Radical RXC and RXC Turbo are still clearly designed just like a race car, the fact that they are street legal here in the United States will give the company far more credibility in the discussion of the world’s fastest cars – and now they are making some of the world’s fastest road cars with powerplants from the Ford Mustang and the Ford F150.

Considering the company’s success at the Nurburgring, I asked Radical Marketing Manager Roger Green if the company planned to take the new RXC or RXC Turbo back to the legendary German road course to try to set yet another record lap time. He explained to me that there are no current plans to take the RXC to the Ring for lap record attempt since two Radical cars already hold the top two times on the list of the fastest street legal cars. Of course, I suspect that could change in the near future if lap times continue to creep towards the Radical’s record times. Right now, the closest competitor is the new Porsche 918 Spyder which ran a time of 6:57 while the Radical SR ran a 6:55 and the SR8 ran a 6:48. Should another company top Radical’s times, the new RXC Turbo could take back that record with Ford EcoBoost power.

Parks McCants wrote on January 22, 2014 - 3:41pm Permalink
How did this fire breathing monster meet or surpass U.S. safety standards? Air bags all around? Front end crumple zone? Or is it registered as a " home built, kit car"...Not that I'm going to bust the bank account for $200 K, just curious.. Interior dimensions please...