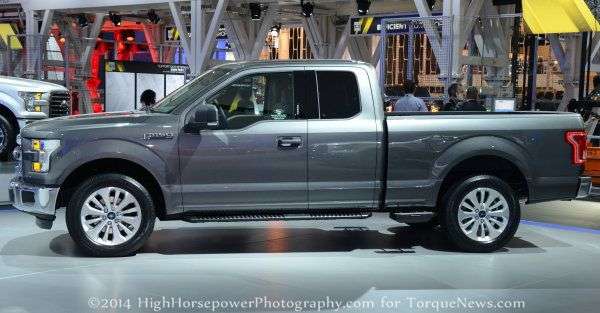 Ford truck fans have long been hoping for a diesel powered version of the top selling F150 pickup and with the popularity of the Ram 1500 EcoDiesel and the plans by both Nissan and Toyota to introduce a diesel – the newest F150 could finally bring a small, powerful and efficient diesel engine to Ford’s half ton truck lineup.
Advertisement

For years now, many people considering a Ford F150 have been hoping to see a diesel engine in the half ton truck lineup as advancements in diesel technology could allow an oil burning F150 to offer very similar working capabilities (hauling, towing) to that of the stronger V8 engine options while still offering incredible fuel economy. For example, the new EcoDiesel in the 2014 Ram 1500 is the most efficient engine option across the entire half ton truck segment in the US while still allowing those fuel friendly pickups to tow nearly as much as the powerful 5.7L Hemi. A mix of fuel economy and power from a diesel powered F150 is exactly what those Ford fans want to see, but the company’s concern about a lack of interest in this premium engine package has caused Ford Motor Company to curb past plans to develop a new half ton diesel mill.

Some consumers suggest that Ford should just throw the PowerStroke from the Super Duty lineup in the F150, but that engine is far too heavy for a half ton truck while also being far too expensive. This was the same reason why Chrysler’s Ram brand avoided dropping the popular Cummins Turbo Diesel from the Ram HD lineup into the Ram 1500. Instead, Chrysler developed the EcoDiesel V6 that does for Ram owners exactly what Ford owners hope to see from a diesel F150 and while some people in the industry will say that there isn’t enough demand for a diesel half to pickup – the fact that all 8,000 of the first production run of EcoDiesel Rams were spoken for in less than 3 selling days is proof that the demand is most certainly there. Having seen the early interest in the EcoDiesel Ram, Nissan was quick to announce that their Titan would soon offer a smaller Cummins V8 and rumor has it that Toyota will offer a similar diesel engine in the Tundra.

With Ram already offering a half ton diesel truck and both Nissan and Toyota expected to follow suit shortly, that leaves only Ford and General Motors without a light duty, inexpensive diesel pickup. GM has resolved that problem by launching the next generation Chevrolet Colorado and GMC Canyon with an even smaller diesel mill – but what about Ford?

I spoke with a member of the Ford engineering team a few years back who explained to me that the Motor Company had been working on a small turbo diesel around the same time that the automaker was developing the current 3.5L EcoBoost V6. Around that same time, fuel prices went through the roof and with diesel costing quite a bit more than even the highest grade gasolines; Ford decided that the benefits of a diesel F150 would not outweigh the cost to purchase that engine option or the cost to feed it. At that point, Ford shelved the F150 diesel project to focus on what this engineer considered to be far more lucrative directions – and the success of the EcoBoost V6 in the Ford F150 shows that the automaker made the right decision. The EcoBoost quickly became both one of the most powerful and one of the most efficient engine options of any half ton truck so at that time – it looked like Ford didn’t really NEED a small diesel for the F150.

The problem for Ford is that with the introduction of the 2014 Ram 150 EcoDiesel, the EcoBoost’d F150 is no longer the most efficient high end half ton truck engine so all of the marketing claims about the 3.5L EcoBoost being the most efficient truck and also being able to pull as much as any other F150 are seemingly out the window. The new 2.7L EcoBoost V6 will likely make the F150 the most efficient half ton truck in the segment but that motor will not offer the hard working capabilities of the bigger EcoBoost or Ram's new small displacement diesel. Because of that, Ford will have to go back to the drawing board to grab some bragging rights with the 2015 F150 and a small, efficient turbo diesel engine is exactly what needs to come off the that drawing board to put the half ton Ford pickup back atop the segment. The only problem with the diesel F150 is that without the project currently in motion – it could take the company a couple years to get an oil burning half ton F Series into dealerships around the country. Fortunately, the amount of time between the launch of the Ram EcoDiesel and the future diesel F150 should allow Ford to come up with a diesel engine that will best Chrysler’s half ton diesel so Ford truck buyers who wait will likely be rewarded with one of the most powerful and most efficient trucks on the market.

Craig wrote on February 28, 2014 - 10:44am Permalink
Like I have said before do you think the leader in trucks is going to sit back with status quo not likely they have not got to where they are by sitting around. They are the leaders for a reason. Ford will put a diesel in this new truck and it will be an in house product just like the diesel in the super duty. Ford is the only North American company to have their own Diesel. Ram of Fiat can't claim that the new cummins is not as reliable as the older versions , Government Motors has an Isuzu motor. Look what this new F150 has done GM is going to struggle to get an aluminum truck out by 2018 their new 2014 trucks are struggling in sales and now they are offering huge discounts to even keep up in sales with the so called dinosaur of the group the current F150 is still leading in sales. And congratulations to all the 8000 people who have bought the eco diesel unproven in our markets and I guess Fiat couldn't come up with a better name I guess the eco in the boost was a catchy name that Fiat liked. Let's face it it is a very competitive segment and finally Fiat and Government Motors have finally realized that Ford is the leader a reason. Fiat had to do something for the Ram because they don't like finishing third all the time.
Dave wrote on March 1, 2014 - 8:21pm Permalink
The EcoDiesel is not hardworking. It has extremely low payloads lbs and hence cannot tow anything. It is Ram that will have to go back to the drawing board if it wants a hardworking fuel efficient half-ton.
Grizzo wrote on March 6, 2014 - 7:36am Permalink
With the ridiculous price of Diesel in Canada(15-20 cents a litre more than gas aka 50-75 cents a gallon more) I'll be more than happy sticking with a gas vehicle, especially one that can operate with a 2.7 litre engine. It's too bad Ford didn't make a small truck with a 1.8-2.0 litre engine. That would rule.
Joel wrote on June 6, 2014 - 8:54pm Permalink
You are overlooking the obvious, Ford intoduced a 5 cylinder oil burner on its new Transit van in the US market. Should be a likely candidate for its most important product
jwcoons wrote on May 18, 2015 - 2:34pm Permalink
I simply will purchase the 1500 Ram vs the Ford 150. Ford is out to lunch on this issue and the Ford 150 with any engine is no match to 29mpg. I test drove the 1500 Ram and it is a nice truck with all the conveniences. Hard to beat.
Alan G Faust wrote on October 10, 2015 - 12:04am Permalink
I am a long time Ford fan, but wow did Ford drop the ball on this one. I have said for years if Ford made a f150 diesel that got 25/30 mpgs they could not manufacture them fast enough for demand. With Dodge and Gm already out with diesels in mid to light duty pickups Ford needs to play catch up fast! I know a lot of people who thought Dodge trucks were a notch below but are driving them now because of he diesel engines and are quite impressed.
Chris wrote on December 23, 2015 - 5:33am Permalink
From boyhood on, I lived in a "Ford family"; it is what I subsequently bought and operate my machine shop with. This year, Ireplaced one of the 1/2 ton trucks and compared the Ford ecoboost to the Ram EcoDiesel----for reasons driven by fuel economy, I bought the Ram. 430ft lbs below 2000 rpm and it moves my 6k lb trailer with boring confidence, and gets 28-30mpg when not trailering (21 mpg hauling a 6k lb trailer in North GA hills). Ford will need to make similar offeri gs to be competetive; I personally found the Ram to look better than the boxy and angular Ford or GM.
Ex Chevy Guy wrote on August 5, 2016 - 11:09pm Permalink
Obama said that after he bailed out Government motors, that they were making even better vehicles. And you can Keep your Doctor and Your current insurance plan. For people to say that Ford is behind Chevy and Dodge must still be drinking the koolaid. There are obvious reasons why government motors and Dodge went belly up and that's because they are inferior. They always copy what ford does as well. The mustang never went out of production, which camaro and challenger did. They come out with the retro mustang and here the other anti mustangs come again. Chevy and dodge should give homage to ford for always paving the way to new innovation.