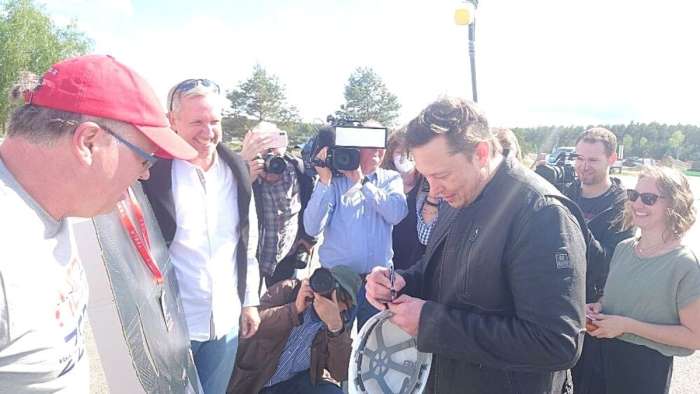 Tesla CEO Elon Musk arrived at the Giga Berlin car factory on Monday afternoon. He landed at Berlin (BER) airport on Sunday in a private jet. The visit was "purely of a technical nature," said Brandenburg Minister for Economic Affairs Steinbach. He also came out and started to chat with Tesla supporters.
Advertisement

Tesla CEO Elon Musk arrived to Giga Berlin on Monday to visit the site of Tesla's first European car factory under construction in Grünheide. On the edge of the construction site, some Tesla fans had gathered with self-made signs that said, for example: "We love the Mission" or "We are skipping school for you," reports Brandenburg's public radio RBB 24. I personally don't encourage skipping school to see a man.

Musk landed on a private jet at BER Airport on Sunday evening. The Brandenburg Minister of Economics Jörg Steinbach (SPD) confirmed the arrival on Monday night on Twitter. Tesla informed him about the visit last Friday, Steinbach continued.

After his meetings at Giga Berlin he came out to the Tesla supporters and talked to them a little bit saying he feels pretty good about the progress of Giga Berlin and expects production by end of the year.

Musk will not hold any political meetings. The visit was "purely of a technical nature," wrote Steinbach. There should be no meeting with him or with Prime Minister Dietmar Woidke (SPD).

We have been informed by @Tesla on Friday, May 14th, that a visit of @elonmusk of Grünheide was expected to happen. As the purpose of this visit is mainly technical in character political meetings with Ministerpräsident #Woidke or myself have not been scheduled. @Stk_Brandenburg

The last time the Tesla CEO was at the Giga Berlin car factory was in November 2020. Musk conducted job interviews at the time, and he also met Economics Minister Steinbach. A lot has happened since then. Tesla originally wanted to start production in July. The schedule can hardly be implemented because, according to the State Environment Agency, the application for approval of the project must be publicly interpreted again. The reason for this is the additionally planned battery factory. In addition, Brandenburg has not yet approved the car factory in terms of environmental law .

Brandenburg's Minister of Economic Affairs does not expect the requirements for the start of production at Tesla in Grünheide until late summer.

I appreciate the transparency that Steinbach informed the public about Elon Musk's visit to Giga Berlin. I think that's how it should be all the times.