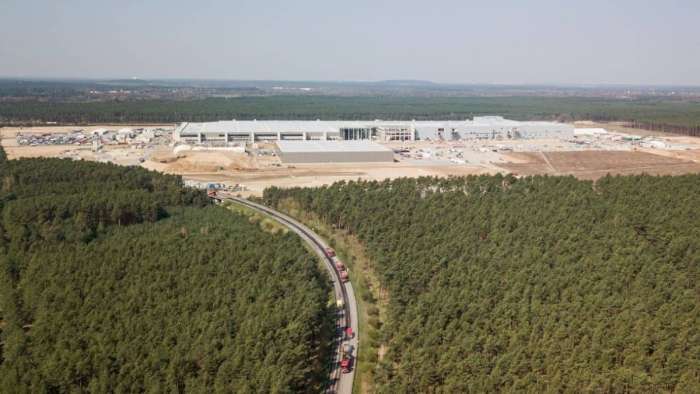 Tesla Giga Berlin Will Rather Be Late In The Year

Giga Berlin will probably be in winter, rather than in summer: The construction of the Tesla Gigafactory in Grünheide has been delayed - and with it the start of production. It was supposed to start in July, but there are several problems, reports German Tagesschau.
Advertisement

When will the Tesla "Gigafactory" start in Brandenburg? In its current quarterly report, the US company speaks of a start of production "late in 2021". So far, Tesla is building at its own risk with a number of pre-approvals - the final environmental approval for the project is pending.

Now a battery factory is to be added. It should one day be the largest in the world, as Tesla boss Elon Musk has announced - and that too has yet to be approved. The application for this must also be publicly interpreted; Local residents, environmental groups and other interested parties can familiarize themselves with the investor's plans, raise concerns and raise objections. All of this will then in all likelihood be discussed and evaluated - and something like this usually takes several months. Brandenburg's Minister of Economic Affairs, Jörg Steinbach, thinks a quarter of a year is conceivable - the completion of the factory could be delayed for at least that long.

Nevertheless, according to Prime Minister Dietmar Woidke, thoroughness is more important than speed: "We are well advised to do everything we can to ensure that the entire approval for car production in Grünheide is legally secure," the SPD politician told the dpa news agency.

Since Musks announced in November 2019 that it would build a Tesla factory in Berlin-Brandenburg, the state government has supported the major project to the best of its ability - if only with the advance approvals from the Ministry of the Environment, which made it possible for the company to fell trees at its own risk and has already built production halls. Because the image of Tesla as an electric car manufacturer who does something against climate change fits in with the spirit of the times.

According to the Brandenburg State Investment Bank, an application from the investor for funding is still being processed. The bank said that it was about more than 100 million euros and that you would need a notification procedure from the EU for this. Overall, Tesla expects construction costs of around one billion euros.

Environmental associations and citizens' groups are still critical of the construction project. Mainly it's about water: that's scarce in the region. The fact that the Gigafactory is being built in a drinking water protection area caused protests from the start. After tough negotiations, Tesla and the responsible water association agreed in September 2020 that the factory may in future use up to 1.45 million cubic meters of water per year. That corresponds roughly to the annual consumption of a city with 30,000 inhabitants. According to the association, additional water can only be supplied in five years at the earliest for expansions such as the battery factory. Until then, a previously unused reservoir is to be developed and a waterworks built. Tesla, it is said from authorities.

But the environmental groups remain concerned, as the region is also expecting a significant influx of people in addition to the factory: Tesla alone speaks of 7,000 employees that the company wants to employ here when the plant is completed. And if the water becomes even scarcer, conservationists fear that habitats in the area that are particularly worthy of protection could be endangered.

Even if the planning documents for the car and battery factory are redesigned, the critics want to pay close attention to possible negative effects on the environment. According to the Brandenburg Nature Conservation Union and the Green League, the redesign of the plans is necessary even without the battery factory, as there have already been many changes to the project.

Conversely, resistance from the region provokes criticism from Tesla. At the beginning of April, the electric car maker expressed its displeasure in writing that the approval process for the factory in Grünheide was progressing so slowly. "The German approval framework for industrial and infrastructure projects as well as for spatial planning is in direct contrast to the urgency of planning and implementing such projects, which is necessary to combat climate change," so the criticism of the Americans.

Tesla seems to take particular offense at the resistance of environmental associations and local residents' initiatives. The "most glaring problem", the letter says, is that in current procedures and laws, projects that fight climate change and those that accelerate it are treated equally. At the same time, Tesla submitted suggestions on how the permits could be faster: for example, accelerated procedures for sustainable projects and consideration of indirect effects on the environment.

But first of all, the electric car manufacturer will have to wait to see when and how the public display and likely discussion of the changed planning documents will take place. And the outcome of this will probably determine when the first of the 500,000 planned Teslas will roll off the production line: at the end of this year - or even the next.

Michael Will wrote on May 1, 2021 - 12:17pm Permalink
Sounds like Europe will get more teslas from Shanghai and the US supporting their economy until the Germans get their act together. In the long run won't matter.