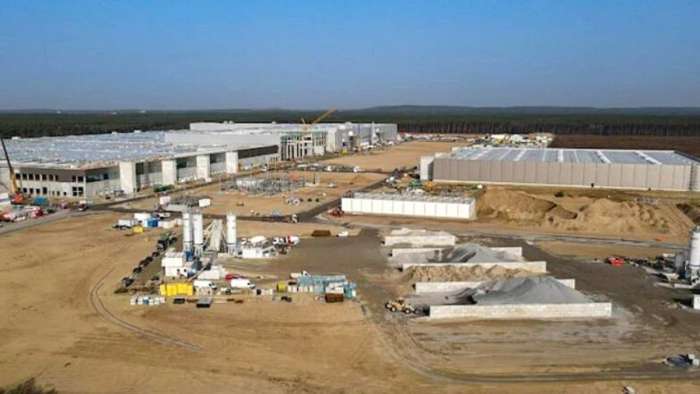 Tesla CEO Elon Musk plans to roll off the first electric cars from his European Gigafactory Giga Berlin in July. But the factory doesn't even have a sewer connection. And there is more turbulence, reports Thorsten Metzner in Der Tagesspiegel.
Advertisement

Suddenly there are problems, problems everywhere on the way to the new Tesla Giga Berlin factory in Grunheide: In a current documentary by the ZDF magazine “Frontal21”, allegations have been raised again about the high water consumption of the Gigafactory, which is supposed to supply all of Europe.

And according to Tagesspiegel information, the planned start of production in Grünheide in July 2021, which Elon Musk has so far stuck to, is clearly in danger. The installation of the production robots in the factory halls is already in full swing on the 300-hectare site.

But the construction of the central sewer pipe, which was originally supposed to be ready in February / March 2021, has not even started. Without it, the Giga Berlin trial run cannot even start. It hardly seems possible that the first cars will roll off the assembly line in July.

Yet, what about these Model Y bodies at Giga Berlin?

Metzner in Der Tagesspiegel also notes that there are also no water and sewage pipes installed on the site itself, which is usually done before the building is constructed. For this - and for building ground leveling - Tesla has applied for two further advance permits. So far, Tesla has been working with ten pre-authorizations ("8a") at its own risk, as the main approval process is still ongoing.

A five-kilometer sewer line at Giga Berlin by July - can it be done?

A five-kilometer sewer pipe has to be built from the plant to Erkner near the S-Bahn station, which is complicated. In the urban area, the underground is difficult due to contaminated sites. The motorway and a railway line must be crossed underground.

Approvals are required for this swer pipe, both from the Federal Motorway Office and the Federal Railway Authority, which is feared because of its long processing times. According to an expert on the problem, that will hardly be possible by July. Tesla, on the other hand, assures industry circles close to it: "The line should be ready for use by the planned start of production (i.e. July)."

As the Tagesspiegel found out, Tesla has now awarded the contract to a Brandenburg civil engineering company, which is now supposed to obtain the permits and build the route. The Strausberg-Erkner Water Association (WSE) had prepared the project and - probably also because of the tight, risky schedule - did not take it on itself.

Instead, it was handed over to Tesla on the basis of a contractual agreement. “On schedule,” said WSE boss André Bähler to this newspaper. “The rest of the implementation is in the hands of Tesla. We don't know what the schedule looks like. "

It is Bähler who in the 45-minute documentary by Frontal 21, as a key witness, vehemently warns that because of the high water consumption of the Gigafactory - built in the drinking water protection area - there would be restrictions for consumers, quote: "The drinking water supply in the region is being sacrificed on the table economic policy."

The factory will initially get 1.4 million cubic meters of water from the WSE, as much as a city of 40,000. This need is considered to be secured. But in the planned expansion stages, up to 3.6 million cubic meters are involved, for which, according to WSE, there is not enough water. Elon downplayed the water concerns.

"We hope that our concerns will finally be taken seriously in the ongoing approval process," Bähler told Tagesspiegel. "Unfortunately, the will to simply push the project through is overwhelming."

ZDF: Employees in the State Environment Agency feel under pressure

Vogel is responsible for the State Environment Agency, where the approval process for “Giga Berlin” is running. "We don't let anyone put us under pressure," assured Vogel. No pressure is exerted, not even from Economics Minister Jörg Steinbach (SPD). "We ensure that a legally secure procedure is guaranteed."

Vogel responded to the ZDF representation, according to which LFU employees felt under pressure, according to internal protocols, because of tight deadlines, but also statements from the Brandenburg government. Then the authorities talk about the "stress factor Tesla".

When the main license for the Gigafactory will be granted is still open. She was last notified by the end of March. In the event of errors, the risk would increase that expected processes could completely destroy Tesla's tight schedule through lawsuits from environmental associations.

Musk also wants to build the “world's largest battery factory” in Grünheide . According to ZDF, he is planning investments of 5.6 billion euros - 4 billion were previously known.

The location that this newspaper made public a few weeks ago has now been officially confirmed: After that, the battery factory is to be housed in the hall, which is several soccer fields large and which Tesla is initially building as a warehouse according to the building application. Environment Minister Vogel recently said that an application for reallocation has been announced.

Much has been speculated about how much this energy transition project will cost the public sector, which will be part of the European battery promotion program for which the EU recently approved subsidies.

Of all people, VW boss Herbert Diess claimed on Tuesday at the company's balance sheet press conference that he knew it: "Tesla has been awarded billions for battery production in Brandenburg," he said. So far there is no confirmation of this. Tesla has to fight on all fronts for the Gigafactory Berlin-Brandenburg.

Tsingshan's Threat to Tesla: EV Maker Is In Battery Crosshairs
Tesla-Funded Research Reveals One of The Biggest Mysteries of EV Battery
END_OF_DOCUMENT_TOKEN_TO_BE_REPLACED