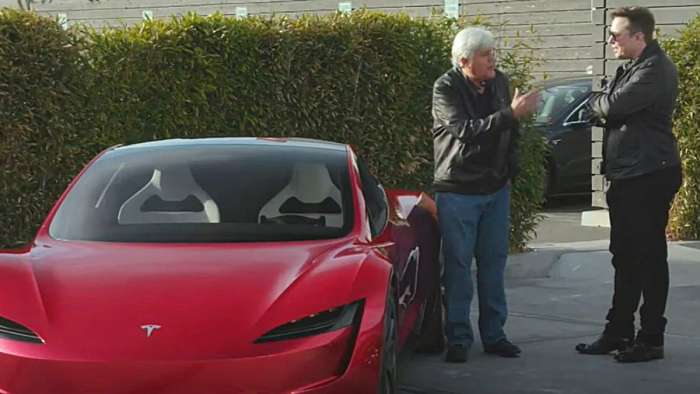 Yesterday, CNBC released a couple of sneak peek teasers of Jay Leno’s Garage Cybertruck Episode, in which Jay Leno and Tesla CEO talk about the 2020 Tesla Roadster with rocket thrusters! Elon Musk describes it as "full-on James Bond” and explains how the rocket thruster will work in a Tesla Roadster if the car doesn’t run on fuel.
Advertisement

The teaser starts with Elon Musk telling Jay Leno that the next Tesla Roadster will have an option to have rocket thrusters. Then the conversation goes like this.

Cold Gas Thruster in a Tesla Roadster: How?

According to Wikipedia, cold gas thrusters are mainly used to provide stabilization for smaller space missions that require a contaminant-free operation. This is how it can be safely used in a car like the Tesla Roadster. Tesla probably learned how to use a rocket thruster in an electric car from its SpaceX experience.

Here is probably one of the most important points. Cold gas thrusters require very little electrical energy to operate, which is useful in our case for the Roadster to save the battery power to maintain a longer range.

Jay Leno’s Garage Cybertruck episode is airing on Wednesday, May 27 at 10 PM ET on CNBC.

Tesla-Funded Research Reveals One of The Biggest Mysteries of EV Battery
Tesla Tesla Buyer Nets a Whopping $12,000 Discount After Asking for Reduction
END_OF_DOCUMENT_TOKEN_TO_BE_REPLACED