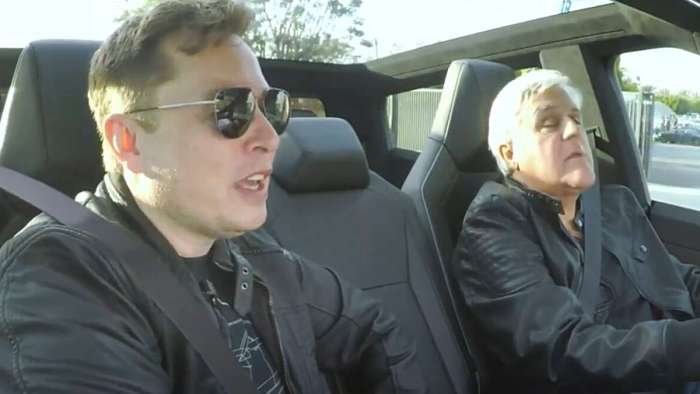 Tesla Cybertruck is going to undergo some change about which Elon Musk told Jay Leno in a teaser of Jay Leno's Garage, released by CNBC Friday morning.
Advertisement

Update: Elon Musk Tweeted last Saturday after this report that after reviewing with Tesla's Chief designer they can't make the Cybertruck smaller.

Be ready for more Cybertruck changes. Elon Musk tells Jay Leno that when Tesla Cybertruck comes out of production it will be 5 percent smaller to fit a normal garage and Tesla will improve the vicibility. Musk says it's difficult to have a glass like that (referring to Cybertruck's interior glass) because of the slop.

Here are the changes that Cybertruck will have at production. Tesla Cybertruck pickup truck will get 5 percent smaller to fit a normal garage and Tesla will improve its visibility.

As Jay drives the Cybertruck, he asks Musk what he would change in the Cybertruck when Tesla's electric pickup truck reaches production.

Jay: What would you change when it finally reaches production, what do you think you would do?

Musk: We are five percent too big and will take all proportions and drop about that five percent.

Jay: All the way around?

Musk: Yes, so it has got to fit in a normal garage.

Musk: There are lots of little details actually. Musk says it's improving visibility. Having a glass, like this, is actually quite hard because it's so slopped.

Jay: Is that a special kind of glass or a normal windshield glass?

Musk: We are going to be using effectively an armored glass for the car and the door panels for the car are 30 times cold-rolled stainless steel and bulletproof. The glass of the Cybertruck is a Tesla Armor Glass.

See you in my latest story, where Elon Musk explains Jay Leno the details of Tesla Roadster's rocket thruster.

Tsingshan's Threat to Tesla: EV Maker Is In Battery Crosshairs
Tesla-Funded Research Reveals One of The Biggest Mysteries of EV Battery
END_OF_DOCUMENT_TOKEN_TO_BE_REPLACED