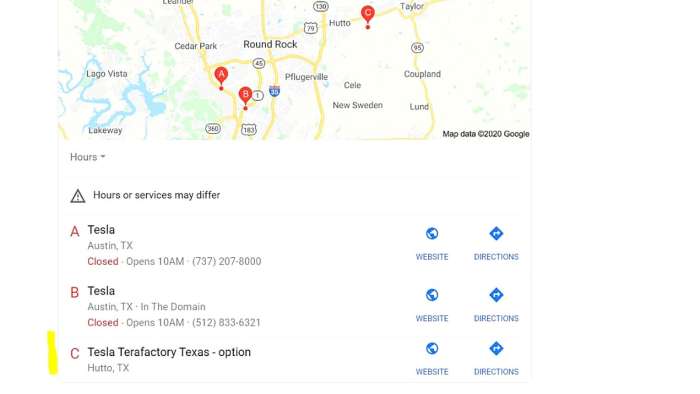 As of this morning Tesla Terafactory Texas appears on Google Maps as an option, but we don't know what "an option" means on Google Maps. It even points to a website.
Advertisement

While Tesla is hesitating between Austin and Tulsa, early this morning, I received a Twitter tip by one of our subscribers named "Understand This," who shared that Austin Tesla Club's discovery of Tesla Terafactory Texas appearing on maps, sharing images of Tesla Maps. An hour or so later people discovered that Tesla Terafactory Texas Option also appears in Google Maps.

Google Maps even provides a website, which shows the property's map. This property, which is a 1486 acre land with dual rail site and 3 miles from Hutto, TX was the runner up to Giga Nevada.

In 2014 Tesla had this property in Hutto, TX, and the Sparks property in Nevada as finalists for its Giga Nevada factory. Eventually, Tesla chose the property in Sparks, Nevada.

According to AP, Tesla now has Austin and Tulsa as finalists for its Cybertruck Terafactory (some call it a Gigafactory), where it plans to build its Cybertruck electric pickup truck and the Model Y crossover.

Tesla is currently in very good financial shape, compared to its situation in previous quarters. This gives wings to its leaders. The demand for Tesla Cars is very strong. Now the third factory should be built in the United States, but where?

Tesla had announced that it would start looking for a site for a third plant last March, before Elon Musk began to be very critical of the current virus, and in particular the containment measures. Tesla's CEO had chosen to defy government measures and restart the production of Tesla in Fremont. No one knows, however, whether the headquarter move is still in the works. We no longer know for sure if other sites than Austin and Tulsa would still be in the race, but in this kind of situation, it is most often the cities themselves that offer themselves. As Elon Musk said earlier, the final decision depends on many factors, including the incentives, logistical costs, access to labor, and quality of life.

Many people think Teslas will choose this property in Hutto, TX as the location for its Cybertruck Terafactory. What about you? One of our sources two days ago told Torque News that Texas will make the Tesla Austin announcement soon.

Brian wrote on May 22, 2020 - 8:25am Permalink
You know locations on Google Maps are often generated by the public, right? Anyone with a Google account can provide edits to any map. You may be getting trolled.
Matt wrote on May 22, 2020 - 6:11pm Permalink
Musk bought a house in Austin last week for what it's worth. Hutto is where the factory will be. Announcement should be made before the end of the month.
Armen Hareyan wrote on May 23, 2020 - 10:45am Permalink
Hi Matt, how do you know Musk bought a house in Austin? Can you email Torque News any link, reference on that? Thank you.
Matt wrote on May 23, 2020 - 1:23pm Permalink
No link. Information came from a source who said Musk bought a home on Lake Austin for 11-12 mil. The source said the homeowner who lives next door to the property purchased by Musk provided them the information.
Armen Hareyan wrote on May 25, 2020 - 2:51pm Permalink
Wow. That's interesting. Thank you Matt.
The EVangelist wrote on July 15, 2020 - 11:58am Permalink
According to an article, by the Austin Statesman, a tax abatement was approved by the Del Valle School District, to lure the factory to the area. The location shown on Google Maps is NOT within the district's boundaries.
Armen Hareyan wrote on July 15, 2020 - 1:20pm Permalink
Yes. Since the publication of this story things shifted and everything is now pointing to Travis County south east of Austin. But Tulsa is still in the play for Tesla's Cybertruck Gigafactory.
David wrote on August 2, 2020 - 8:46pm Permalink
This is the wrong address. You can tell it looks nothing like the site. Here is the correct address of the Marietta mixing plan which sits in the middle of the property. You can see the water matches. 13101 Harold Green Road Austin tx 78725