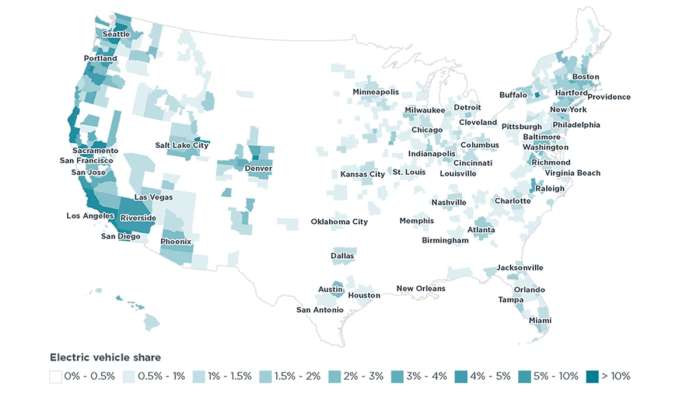 A new ICCT report reveals increased EV adoption in the US, highlighting the Tesla Model 3 and Honda Clarity plug-in hybrid as key models, as well as the automakers and policy agendas driving this development.
Advertisement

Electric vehicles posted promising growth in the US market last year, according to a new report.

The International Council on Clean Transportation, a nonprofit organization with outposts around the world, found that EV sales passed the two million mark during 2018. This translates to an increase of 70% growth over sales in 2017. While the growth is primarily occurring in US cities, long-range all-electric models are now leading the charge for increased EV adoption.

The report makes interesting reading for automakers, some of which are making greater strides towards electrification than others.

Tesla Model 3 is a Game Changer for Electric Vehicles

While 10 automakers delivered the majority of EV sales in 2018, together accounting for 96% of the market, Tesla was inevitably the main catalyst of increased adoption.

Moving more than 130,000 units, the Tesla Model 3 was by far the best-selling electric car in the United States last year. Indeed, Tesla vehicles tripled the company’s sales overall and made up around 60% of the US market by Q1 2019.
Even though we’re living through it and the rollout felt painfully slow after a three-year wait for many owners, the speed of change wrought by the Tesla Model 3 cannot be overstated.

In less than two years, Tesla has moved from the position of a niche brand with very expensive electric cars to being an established automaker with the 13th best-selling car in the United States, period.

2019 promises to be an even bigger year for Elon Musk and his team. Here are 5 exciting Tesla events still to come this year.

Even with its market dominance, Tesla isn’t the only automaker contributing to greater EV adoption.

General Motors continued its steady stream of electric sales, with the Chevy Volt and Chevy Bolt EV combining to push GM past the 200,000 mark in 2018. This triggered the phaseout of the company’s federal tax credit, but demonstrates a healthy base of non-Tesla buyers for the company to build on.

Hyundai-Kia also had a small-yet-notable chunk of electric sales in 2018, thanks to the Hyundai Ioniq and Kia Soul EV. With the new Hyundai Kona Electric and Kia Niro EV long-range models catching a lot of attention for the new model year, we can expect the South Korean automaker’s role in increased EV adoption to continue in 2019.

If you own an electric vehicle from Hyundai or Kia, make sure this fast-charging issue on Electrify America doesn't make your summer travel more expensive.

The Japanese automaker contributed significantly in the plug-in hybrid category, with sales picking up from 2,000 units in 2017 to 20,000 units last year.

This aspect of the report highlights the importance of PHEV options as a transition option for anyone not quite ready to go “full BEV.”

Overall, 65% of those who made the jump to electric vehicles in 2018 went for all-electric, but the remaining 35% opted for a plug-in hybrid. Many buyer in the latter group might well have been forced back to a full combustion engine without the bridge offered by PHEV options.

As we explored in a recent article, the success of the Toyota Prius Prime plug-in hybrid has also accelerated Toyota’s plans for electrification.

Over to You, Legacy Automakers…

One of the key takeaways from this report, in addition to the many valuable policy insights, is that we need more options to continue the rapid acceleration of EV adoption.

While volume production of the Tesla Model 3 brought electric cars closer to the mass market in 2018, its sales still represent a lot of pent-up demand from early adopters. The Model 3 is moving into the mainstream thanks to that adoption and regular media coverage, but not everyone wants a sedan and some don’t even want a Tesla (or so they say).

That means that legacy automakers need to step up to the plate and deliver the kind of EV diversity that Tesla alone can’t achieve.

On the topic of electric trucks, here’s why the Rivian R1T isn’t the pickup to take EVs mainstream.

Already this month, major automakers like Toyota and BMW have accelerated their electrification plans to deliver more EV models by 2023, as opposed to their previous 5-10 year timelines.

The writing is already on the wall for a transportation paradigm shift, as the ICCT study clearly shows.

After a decade of dragging their heels, it now falls to established manufacturers and policymakers to read the signs and move decisively towards electric vehicles.

What do you think EV adoption in the coming years will look like?

Will Tesla continue to dominate or can other automakers step up to offer meaningful competition?

Let us know in the comments and I'll see you in the next story where I am discussing what owners want to see from the rumored Chevy Bolt EUV.