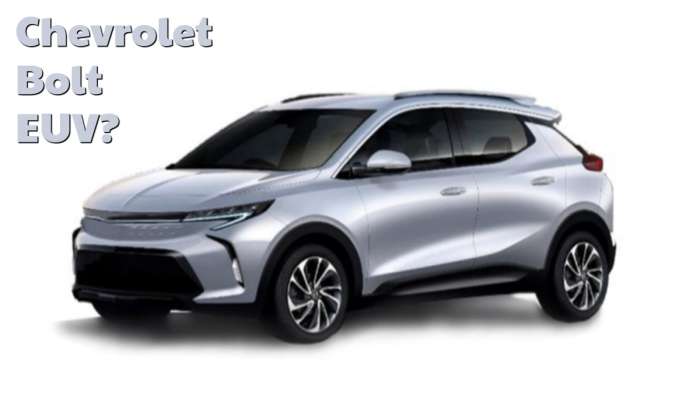 General Motors recently trademarked the term “Bolt EUV,” leading to much speculation about a new electric model. As excitement builds for new EVs from GM, what do we hope to see from the rumored Chevy Bolt EUV?
Advertisement

Earlier this year, reports surfaced that General Motors had filed a trademark application for the term “Bolt EUV.” Naturally, this fueled speculation that a new model was in the works, based on the existing Chevy Bolt EV’s BEV2 platform.

Because of the term's similarity with the well-known vehicle categories SUV and CUV, the industry immediately jumped to the conclusion that EUV stands for Electric Utility Vehicle. Basically, the Bolt EV in a larger form factor and, possibly, a bigger battery pack.

While this speculation isn’t unfounded, it remains just that: best guesses based on current models and other announcements from GM.

Subsequent spy shots of a camo-clad electric car with many similarities to the Bolt EV stoked the rumor mill once again last month. Against that backdrop, why not join the party and let’s take a look at what current GM electric drivers would like to see from the mooted Chevy Bolt EUV.

An electric Chevy crossover thought to be called a Bolt EUV has been spotted testing ahead of a launch in 2020. Source: Motor Authority @bobbyllew @FullyChargedDan @sr_edy @GeorgeMienie @EVNewsDaily #electricvehicles #ev #Chevrolet pic.twitter.com/2z0Yac2IPe

Owners of the Chevy Bolt EV are generally pleased with their vehicle.

Naturally, there are always small improvements to be made, but the fundamentals of an efficient drivetrain, satisfying performance, and an enjoyable electric ride are in place already.

When it comes to a new model, however, the visions of what might follow become a little more ambitious.

Freed from the shackles of critiquing an existing car that they enjoy, owners can project their personal wish list for GM’s future electric fleet onto the potential Chevy Bolt EUV.

Here’s a selection of comments from Bolt fans and forums on what the Bolt EUV could offer in some key areas.

From a source connected to the GM electric vehicle engineering team:
“I’ve heard rumors that ACC is coming soon, but Super Cruise is unlikely to arrive before 2023 when the BEV3 platform debuts.”

While we don’t expect great luxury from the Chevrolet brand, more modern creature comforts could make all the difference compared to the current interior, which some describe as cheap and “like a rental car.”

One potential buyer went so far as to say the lack of Adaptive Cruise Control (ACC) and “extremely limited Lane Keep Assist on the Bolt EV” stopped him from buying the current model outright.

With others saying the same about the vehicle’s seats and infotainment system, it would make sense for GM to take this opportunity to make the Chevy Bolt EUV more amenable to drivers who need these features.

As several commenters point out, “the Chevy Volt had ACC for years, so why can’t the Bolt?”

"As big as the Chevy Equinox but with a Blazer nose," is one reaction that seems to resonate with Bolt EV drivers when the (admittedly heavily camouflaged) spy shots emerged.

Not everyone believes that the vehicle under all that camo was the Chevy Bolt EUV, but it’s not unreasonable to think that the styling will follow Chevrolet’s larger gas SUV models like the Equinox and the Trax.

That makes sense when looking at the spy shots and also for the potentially lucrative Chinese market, where the Buick brand and styling has proved popular on models like the Buick Velite. That model’s 6 MAV prototype was unveiled at the Shanghai Auto Show back in April to some acclaim, leading some to speculate that GM’s new higher-end electric vehicles will take design cues from the Buick range.

All things considered, this could be one of the least important aspects of the Chevy Bolt EUV.

While some laugh off the Bolt EV as ugly, that usually comes from drivers of premium vehicles who weren’t considering the Bolt in the first place.

Owners who value practicality and efficiency over aesthetics are perfectly content with the look of the current Chevy Bolt EV. This group of buyers would much prefer to see engineering-based improvements before any subjective aesthetic enhancement.

"The BEV3 engineering goal is to recharge 200 miles or range in 15 minutes, with an overall range of at least 300 miles.”

Again, this is the vision relayed by a source reportedly close to GM’s engineering team. However, it applies to the automaker’s third-generation battery platform, BEV3, which is unlikely to be revealed until 2023 unless GM has some major surprises to spring on us all.

Nonetheless, it seems almost guaranteed that any new model from General Motors will see upgrades to the battery and/or drivetrain.

Specifically, it will probably be capable of delivering more power to move the heavier vehicle to which it’s bolted (pardon the pun). Faster charging is also a must, given the 55kW max charge rate on its predecessor is one of our primary reasons the Chevy Bolt EV is already outdated.

“The ideal would be a 600-mile range in a lighter battery with higher energy density,” says one commenter focused on traveling longer distances.

That seems too optimistic, so let’s bring the conversation back to more likely upgrades. From another current owner who has traveled long distances in his 2017 Chevy Bolt EV:
“I suspect they will stay in line with the competition. That means a 64kWh battery pack, around 260 miles of range, and better battery cooling to support higher peak charging.”

If that speculation holds up, the Chevy Bolt EUV will be a compelling alternative to newer mid-priced models like the Kia Niro EV and the Hyundai Kona Electric.

On the subject of these competitors, read about this charging issue impacting Niro EV and Kona Electric owners.

One aspect of the vehicle that surprisingly few people seem to mention is the name itself.

GM came in for a lot of criticism for the similar-sounding Volt and Bolt duo, with some buyers still confusing the two names even after the retirement of the Chevy Volt.

A Chevy Bolt EUV, assuming it doesn’t replace the existing Bolt EV, would add an additional layer of confusion just as GM has a chance to move away from the issue.

It could perhaps be the beginning of a set of vehicles under the Bolt banner, but the naming distinctions will need to be a little clearer if this is the case.

Alternatively, it could be the abrupt end of the current Chevy Bolt EV as we know it.

As one commenter put it: “I wouldn’t be surprised if they retire the Bolt EV…if they have the EUV coming that’s so similar that it would be very confusing.” I don’t subscribe to that theory, given that comments from Mary Barra suggest GM is committed to the Bolt EV and using it as a development platform for its autonomous vehicles program.

Whatever the company comes up with, and however it proceeds with naming, the potential for the Chevy Bolt EUV is substantial. It gives General Motors an opportunity to bridge the gap between the early promise of the Chevy Bolt EV and the hopefully significant leap that the automaker will make with the BEV3 platform in a few years’ time.

We hope GM takes this opportunity to get another jump on the competition, rather than following the example of Nissan letting an early EV lead slip away.

What do you want to see from the next models in GM’s electric vehicle line-up?

Do you think the Chevy Bolt EUV will be the first new model unveiled by the automaker?

Let us know in the comments.

See you in the next story where I'll be covering a major summer road trip in the Chevy Bolt EV.

Erik wrote on June 27, 2019 - 6:43pm Permalink
I have heard a whole lot of rumours about Chevy Bolt EUV, but nothing substantial. We do know that GM is launching a new CUV. Will this be the EUV... Maybe. The Bolt EV is also due for a refresh and possibly the EUV is a trim level? I suppose it's fun to speculate. But that's all it is. Speculation until we have more details later this year.
Art kirsch wrote on July 19, 2019 - 6:45pm Permalink
The new euv will be called the volt just my guess. Might be why they discontinued the plugin hybrid ?.
Dan wrote on June 27, 2019 - 6:46pm Permalink
For the Chevy Bolt EUV I would also like to see 300+ miles and high/fast charging rates, but what I really want to see is autonomous driving.
Alan wrote on June 27, 2019 - 6:50pm Permalink
I come from a little different perspective. We are a two-car family: a Chevy Spark EV and another brand PHEV. Even with its limited range, the Spark gets the bulk of our miles with the PHEV getting longer trips. We backed off from upgrading to the Bolt because our little Spark was still a more comfortable ride for two adults and the Bolt features—other than range—were just not enough to justify the cost. 200+ miles range is fine and I really don’t care about fast charging; I just plug it in at home at night (L2 charger). If Chevy wants me as a customer, here are three must-have features: 1. Drive to a stop ACC. I have this in my PHEV and won’t buy another car without it. 2. Seats comfortable for two mature adults. 3. A good quality navigation system designed for a vehicle. Ford has a great one—copy that.
John wrote on June 27, 2019 - 6:51pm Permalink
I would like to see the Bolt EUV meld into a cross between my Bolt EV and my Honda Element. The Element is a great utility vehicle. ACC and backseats that fold up and can be removed would be terrific for my needs.
John_F wrote on June 27, 2019 - 6:52pm Permalink
I don’t want to see that prominent pushed out grille. Looks too much like Toyota’s.
Gian wrote on June 28, 2019 - 7:11am Permalink
I wish the Chevy Bolt EUV will come with All Wheel Drive. It's about time and in so many parts of the country, wet weather of the frozen or downpour kind are better traveled with AWD. Especially when you're traveling with your most precious cargo: my wife and two young boys. Don't get me wrong: have loved my Bolt and the Volt I leased before that, but it's beyond time, GM. The earth ain't getting cooler. AWD or adios.
Jay_B wrote on June 28, 2019 - 9:41am Permalink
All wheel drive is a MUST for some people. My wife will not look at a vehicle if it isn't AWD equipped. The Bolt would be in our driveway if it had AWD.
Zig wrote on February 4, 2020 - 1:13am Permalink
I like my 2019 Bolt, Feels good on the road, or longer trips. Very good acceleration. all wheel drive would be good in the winter. Charge and efficiency is very good. One pedal drive is what I use all the time. Would be nice to see deeper dive in he cars' data maybe on the center screen, to compare how batteries and electronics are performing. It has been a lot of fun !