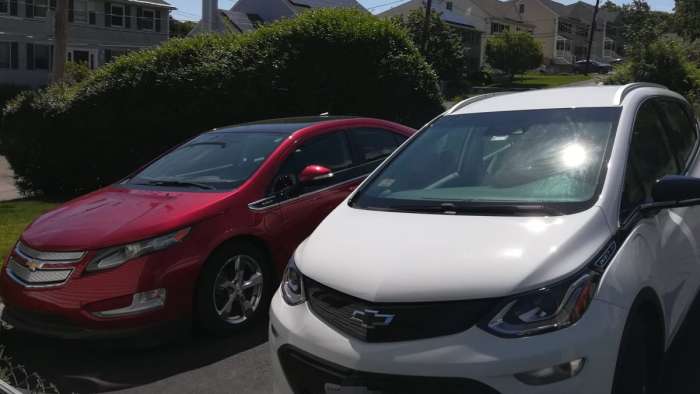 The popular Chevrolet Volt plug-in hybrid is GM’s best-selling electric vehicle. It's also one of the contributing factors to lackluster sales of the Chevy Bolt EV in 2019.
Advertisement

Over the last ten years, the choice between plug-in hybrid (PHEV) and full battery electric vehicle (BEV) has been one of the first decisions to make for prospective EV buyers.

The choice can be complicated by other factors, but it often boils down to this: go all-in on electric miles and rely on the public charging infrastructure for longer trips, or accept a lower electric range for the safety net of gasoline back up?

Initially, this was quite an easy decision. Unless you were shopping in the luxury segment and could splurge on a Tesla, PHEV options like the Chevy Volt and Toyota Prius Prime offered the best of both worlds.

On that topic, here's how the 2019 Prius Prime gives Toyota an EV pass for the moment.

Competing BEVs such as the first-generation Nissan Leaf and BMW i3 were still barely scraping three-digit range estimates, so PHEV models offered the all-electric driving experience around town, as well as the ability to hit the road with a gas engine for long-distance driving.

However, as the decade progressed, more capable BEV models were introduced. These vehicles delivered larger battery packs, greater range, and the lower maintenance costs of pure-electric cars, all at a relatively affordable price close to $30,000 after incentives.

The Chevy Bolt EV was the first of these second-generation electric vehicles, but it has in some ways been limited by its hybrid stablemate. Here’s how…

As it was retired in March of this year, the 2019 Chevy Volt closed the model’s Q1 sales at 2,520 units, according to the quarterly report from General Motors.

That’s because GM triggered the phaseout by passing 200,000 sales of electric vehicles in the final quarter of 2018. Guess how many of those sales went to the Chevy Volt? Well, the figure stands a little over 150,000 units.
.
That’s right, more than three-quarters of GM’s tax credit allocation, at its maximum level, went to the underrated plug-in hybrid that could. This is where the impact on sales of the Chevy Bolt EV enters the equation.

On October 1st, the federal tax credit will step down again for GM. The drop from $3,750 to $1,850, which Tesla is now wrestling with new options and last-minute price changes, significantly changes the purchase equation for the Chevy Bolt EV.

The Bolt retails at $37,495 for the base LT trim and $41,895 for the Premier. While any tax incentive helps ease the initial sticker shock that all new BEV models come with, the final level of the tax credit is unlikely to sway buyers significantly. Now combine that with the retirement of some EV incentives at the state level and, in many states, additional registration fees either proposed or already levied on electric vehicles.
While all of this puts the US EV market in flux, it marks an important pricing transition.

Despite announcing that the Chevy Bolt EV’s suggested retail price would not be cut, we’re already seeing deep discounts at the dealership level in key markets. As our Torque News expert John Goreham wrote earlier this week, buyers in ZEV states can get a Bolt EV for as low as $20,000 after current incentives and deep discounts.

Nonetheless, without the full tax credit available the 2019 Chevy Bolt EV remains a somewhat pricey option if dealers can’t maintain those deep discounts. This is especially important as slightly more capable BEVs like the Kia Niro EV and Hyundai Kona Electric come to market, from manufacturers who have many years ahead of them to exploit the full federal tax credit (assuming it stays in place, that is.)

On the subject of those new models, read about this charging issue that Niro EV and Kona Electric owners need to know about.

Had General Motors been able to leverage even an extra 12 months of the full federal credit, it would have made the Chevy Bolt EV even more price competitive and seen the company through to what many owners believe will be a mid-cycle upgrade with the 2020 Bolt EV.

I covered my 3 reasons the 2019 Chevy Bolt EV is already outdated in a story last week.

2019 Chevy Volt is the Last Model Year. Gone Too Soon?

None of this is to claim that GM made a mistake with the Chevy Volt. Quite the opposite, in fact.

The vehicle is beloved by those who’ve owned it and has helped some transition to all-electric with the Bolt EV. As an open letter to GM published by Torque News in January highlighted, the Chevy Volt is an ideal transition vehicle. It delivers many of the benefits of an electric drivetrain while allaying range anxiety and familiarizing drivers with the public charging infrastructure.

Furthermore, the car’s impressive EV-only range of 53 miles means that the percentage of electric miles driven by the typical Volt driver is often more than 70%. That’s a lot of local driving that might otherwise have been completed in a gasoline vehicle.

Still, whether or not you think the Chevy Volt is gone too soon, it doesn’t change the fact that its all-electric sibling sure could use a chunk of the tax credits that the Volt sucked up over the next few quarters.

What’s done is done, however, and it now falls to General Motors to prove the company can deliver the next phase of compelling all-electric vehicles at an affordable price point. With 20 different models slated for release by 2023, all eyes are on GM to build on the base the Chevy Volt and Chevy Bolt EV have already built.

See you in the next story where I am discussing how bad planning can ruin a simple EV road trip.

Ari wrote on June 21, 2019 - 5:26pm Permalink
The article doesn’t claim that there is cannibalization of sales, but rather the phaseout of the credit (with the vast majority of the 200,000 credits before the phaseout kicked in going to the Volt). This, of course, is true since it creates a price advantage for latecomer manufacturers (Honda, Toyota, Kia, Hyundai, Volkswagen Group) to the Plug-In Electric Vehicle party. But I would put more of the blame at the structure of the Federal EV tax credit than on the EVs that GM sold that qualified for the tax credit. It rewards companies that wait until costs are low before selling EVs.
Eric wrote on June 21, 2019 - 5:27pm Permalink
The Bolt EV's sales have been stable since its release, even in the face of the Volt's fluctuating sales. Even if there was a correlation between Bolt EV and Volt sales numbers (there isn't), that wouldn't prove causation.
Steve Birkett wrote on June 21, 2019 - 6:13pm Permalink
The point is that the Volt eating up so many tax credit sales early on is making the Bolt EV a harder sell now, not that the people bought Volts instead of Bolts. That's made clear at several points in the article.
OGDEN wrote on June 22, 2019 - 11:29pm Permalink
Neither car has sold successfully. The VOLT never made any money for GM and the BOLT isn't selling either. The cars are simply tiny and ugly...like a tennis shoe with swirly whoops and whirls, color and flash. Tasteless. The next generation BEV from GM will be based on the BOLT platform and will be another loser. Mark my word.
Allan deLaubenfels wrote on June 22, 2019 - 2:16pm Permalink
I have a 2017 Volt and I love it. I am really sorry to see it gone from the new car choice. But there is a reality here. Chevrolet is not in the car making business. That is incidental. Chevrolet is in the money making business. Of course a car must be desirable to the customer or it will not be built. However the Volt is VERY desirable, just not able to compete for dealer attention with ICE cars. I agree with others that the Volt/Bolt sales comparison is about fleeting incentive changes, not the merits of the two cars. Someday ICE cars will be simply too expensive to own. Electric cars will be fine when that day comes.
DeanMcManis wrote on June 22, 2019 - 7:40pm Permalink
All of your points are valid, except that you are looking back, as a Bolt owner. I wonder if the Bolt (or it's competitors) would have been as good as they are now if it weren't for the Chevy Volt (and getting the tax credits). Certainly Tesla has been the most influential disrupter for EVs and gas powered cars in the last decade. But it was mostly the Volt and the Leaf that provided the majority of new EV sales and leases for vehicles under $40K. And that value of affordable EVs was even higher 10 years ago. For me, the Volt was the first car that I ever bought/leased new. And it was the car that made me love EVs, and recommend them to my friends and family. But it was the tax credits that brought down the monthly lease cost to about the same that I had been paying in gas alone previously. At the time the Tesla Model S was FAR more expensive, even with tax credits, so it wasn't an option, whereas the Volt (with the tax credit and state rebates) cost about the same to own as a new Honda Civic or Toyota Corolla, and in 2013 the Volt was a MUCH cooler car to drive and own. Plus, here in California the Volt got me into the commuter lane which shaved 1-2 hours off of my commute! So it was a win-win situation. Plus, being a plug in hybrid, with no driving range limit (with it's gas range extender) it appealed to a larger group of buyers in a world of 99% gas/diesel powered cars. And even though (looking back) you could view the Volt as taking up the future competitiveness of the Bolt by using GM's tax credits, the Volt really established GM and Chevy as being a visionary leader in electric vehicles, setting stage for the Bolt to arrive.