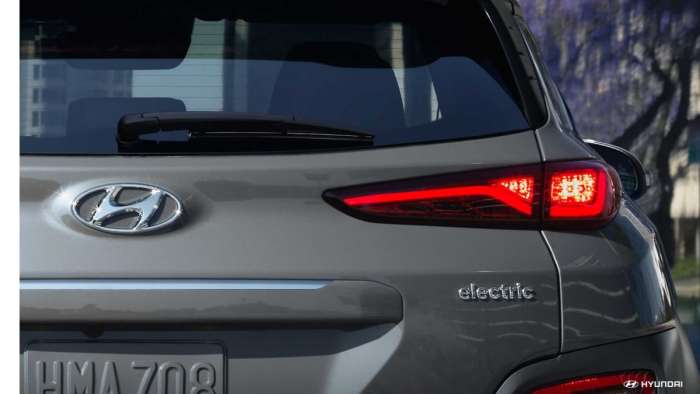 The second generation of electric vehicles has seen some compelling long-range options come to market, the latest of which are the Kia Niro EV and the Hyundai Kona Electric. The two South Korean automakers have deep roots together dating back more than 20 years, which is why these two new EVs are distinct models but have very similar capabilities.

One of those capabilities is a maximum DC fast charging rate of around 75kW, which is where the problems begin for owners in North America who want to use the rapidly expanding Electrify America network.

Replacing the previous flat rate of 35 cents per minute and a $1 session fee, the new pricing puts vehicles into different power tiers based on the maximum charge rate requested by the EV.

The per minute rate varies slightly by state, but here’s how it looks in my home state of Massachusetts:

As you can see, the cut-off between the first and second tier of pricing is right on the line for the maximum charge rate of the Hyundai Kona Electric and Kia Niro EV. As a result, these models can trigger the higher cost of tier 2 if they hit 76kW. However, owners receive almost none of the benefit of that higher tier as the car is barely in the higher power tier and only briefly achieves that rate.

Note that the prices above are for users on Electrify America’s no-fee Pass membership, which also comes with a $1 session fee attached. There are cheaper per minute rates and no session fee on the Pass+ plan, but that costs $4 per month and the pricing tiers are still in place. On either plan, the same issue of bouncing between tiers and paying more for the privilege applies.

For owners of most existing non-Tesla EV models, this isn't an issue as the cars can't reach the new tier. As I wrote last week, for example, my Bolt EV's maximum charge rate is 55kW.

For owners of the 2019 Hyundai Kona Electric and 2019 Kia Niro EV, however, this is a real-world problem as summer arrives and vacation driving begins.

The issue has now been highlighted in real-world testing after EV YouTuber Kyle with Out of Spec Motoring took a 3,000 mile round trip in a Hyundai Kona Electric.

While that’s an impressive journey in its own right, in the video below Kyle talks about the cross-tier pricing confusion that inflated his charging costs from an estimated $40-50, to an actual cost of $83.

The video covers other aspects of his trip but starts here at the 4:20 mark to get straight into the section about his charging with Electrify America.

Here’s a quick summary of what he says:

• On the Hyundai Kona Electric’s maximum charge rate: “If the car pulls 76kW at one point, even for a brief moment, the whole charging session by minute costs more than double.”
• On the variation in his Electrify America charging costs: "40% of my charging stops were tier 1, the rest fell into tier 2. This means I was charged $83, but it should be closer to $40-50. By energy costs, that's a range of 14-49 cents per kWh."
• On a potential fix from the network or manufacturers: "Electrify America and Hyundai are aware of the issue and hopeful that software will fix it."

At its worst, on long trips, this is an issue that could cost drivers of these models hundreds of dollars they should not have to pay.

Although this isn't an issue that will affect Nissan EV drivers, the 2019 Nissan Leaf has problems of its own related to charging.

When Can Owners Expect a Fix?

Good EV citizen that he is, Kyle mentions in the video that he has already reached out to Hyundai about the issue. Electrify America will also be aware of the problem and Kia Niro EV owners will hope that Kia is also in conversation with them about a fix.

In theory, it should be possible to fix the issue via a software update on the Electrify America side of things.

If the charging station is able to detect the maximum rate of charge it delivers, it stands to reason that it can also extrapolate the average rate of charge and could perhaps use that as the baseline for pricing tier allocation.

As is often the case, Tesla demonstrates best practice here.

The Supercharger network slots users into upper and lower pricing tiers based on real-time charge rate, not the maximum achieved in one brief burst. In locations where the company is forced to charged by minute rather than by kWh, due to local regulations, if your vehicle is charging more slowly, you pay a lower rate.

Until either the manufacturers or Electrify America deliver a fix, this remains a potentially costly charging issue that Hyundai Kona Electric and Kia Niro EV owners need to be aware of before heading out on summer road trips. We’ll keep an eye on the problem and let you know how this plays out.

See you in the next story where I am discussing how the Chevy Volt impacts Chevy Bolt EV sales in 2019.