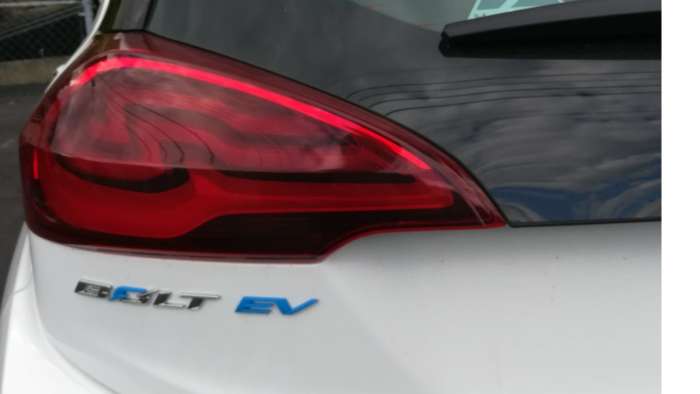 Ah, General Motors... love them or loathe them, EV enthusiasts and Bolt owners must admit that with the Chevy Bolt, GM was able to make a great electric car.
Advertisement

GM unveiled the award-winning Chevrolet Bolt EV at the Consumer Electronics Show (CES) back in 2016, starting production later that year and beating even Tesla to market with an affordable long-range EV.

Since then, the Bolt EV has sold in steady volumes and built up a cult following among early adopters (and those who simply couldn’t hold on for the Tesla Model 3.)

However, the EV market moves quickly and is unforgiving. As a result, the Bolt EV is already outdated in 2019 and ready for the same kind of mid-cycle refresh that revitalized the Chevy Volt plug-in hybrid back in 2015.

On the subject of PHEV vs. BEV, here's why even in retirement, the Chevy Volt still impacts sales of the 2019 Bolt EV.

Here are 3 areas that make the Bolt EV feel outdated compared to the competition:

Let’s examine each of these more closely and see what GM can do to bring its first pure-electric car back to the future.

When the Bolt EV was released, the North American charging infrastructure was limited, to say the least. DC fast charging units were typically rated 50kW at best and limited to coastal routes or major metropolitan areas. With the ability to hit 55kW on a capable charge unit, the Bolt EV’s maximum charge rate seemed rather spritely.
Fast forward three years and all that has changed.

Established charging networks like EVgo and ChargePoint are rolling out equipment rated for 150kW charging and above. At the same time, the Electrify America network, funded by VW as its penance for Dieselgate, is future-proofed to the tune of 350kW charging and installing sites coast-to-coast. Competing electric vehicles like the Tesla Model 3 will soon charge at up to 200kW and even direct compact hatchback competitors, such as the Hyundai Kona Electric or Kia Niro EV, will outperform the Bolt at around 75kW charging.

Based on the latest EV sales figures, the Bolt has some catching up to do. (Please subscribe to Torque News Youtube Channel for daily automotive news and analysis).

To catch up, GM must do two things:

Second: move the current taper point at 55% closer to 80%. The latter, which refers to the state-of-charge at which the car tells the station to reduce power for battery conservation, is arguably as important as the former.

On the subject of range, the much-anticipated 400-mile Rivian R1T delivers on that score, but here's Why the R1T is Not the Truck to Convert Everyday Pickup Drivers to Electric Vehicles.

2. Accept That Over-The-Air (OTA) Updates Are the Future.

If any non-Tesla EV owner tells you they are not jealous of OTA software updates, that person is either lying or doesn’t know what they are. One of the joys of owning a Tesla is that you can go to sleep and wake up to find your car has been upgraded overnight, without visiting a dealership or paying a dime.

In early 2019, for example, Model 3 LR owners were excited to learn that Tesla’s latest software update had increased their range from 310 to 325 miles per charge. All through the magic of regular OTA updates. By the way, OTA software updates are one of the top 10 reasons why Tesla Model 3 will be remembered like iPhone.

The reality for Bolt EV owners is not nearly as exciting.

Although the car can receive updates in this way, software enhancements from GM have been few and far between. Getting a slightly larger screen for Android Auto one year ago just isn’t in the same league as what Tesla, a company forged in the UX-obsessed fires of Silicon Valley, can provide.

In fairness, this isn’t a challenge facing General Motors alone. Every legacy car manufacturer typically keeps its latest software for the next model year. It's simply not the norm for a car that has already been sold to see a software upgrade. GM could be the first of them to break this tired old mold and every Bolt EV produced, present or future, would be the better for it.

Some elements of the Bolt EV’s interior could be described as tech-forward, such as the relatively large touchscreen or the multiple camera angles for parking assistance, but there are many modern car conveniences that it lacks. Also see this Chevy Bolt vs 2018 Nissan Leaf comparison where Bolt's interior is discussed as well.

Let’s start with the Bolt's seats.

No, not the divisive issue of their body-hugging (dis)comfort, which some owners lament and others kind of love. In this case, we’re looking at the manual controls to adjust the front seats which, in the age of electronic everything and even preset driver profiles for Tesla owners, feels decidedly last decade.

Seats are "one of the primary complaints some Bolt owners have.".

From there, work your way around the cabin and there are things that make the Bolt EV feel ready for a refresh. The mixture of physical buttons and touch screen controls is a little off, for example, with dead space in some places and cluttered digital controls in others. Then we have the hard plastics, which although they’re to be expected in an affordable compact car, should never deliver the blinding glare of the lighter color interior options.

Although these might seem like minor quibbles for some, electric vehicles are supposed to feel like the future and the Bolt EV has enough dated interior design elements to detract from that excitement.

GM’s remit here is simple enough: listen to feedback from owners of the Bolt’s first three model years. We’re a dedicated bunch who can help the company address 90% of what needs improvement in the car’s cabin. It doesn’t need to reach Model 3 levels of minimalism, just a few tweaks that will create a more compelling interior.

The Bolt EV is an excellent electric car that still holds its own in the absurdly dynamic marketplace that it helped to develop three years ago. With improvements in these three key areas and some other minor enhancements, GM can ensure that the 2020 Bolt EV no longer feels outdated and will continue to hold its own as more competitors enter the market.

Watch my Chevy Bolt Reaching a 300 Miles Per Single Charge and Subscribe to Torque News Youtube Channel for more News on EV and Auto Industry.

If you drive a Bolt EV, what aspects of the car would you like to see improved next year?

If you thought about buying but opted not to, what put you off? Let us know in the comments. See you in the next story where I am going to discuss how Toyota is getting an EV Pass with the 2019 Prius Prime sales.