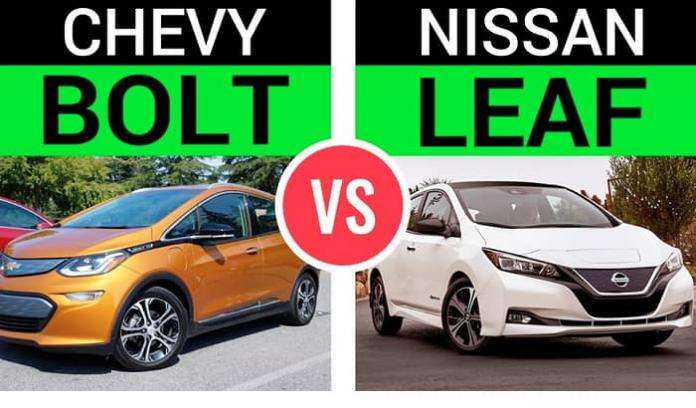 Chevrolet Bolt and the new 2018 Nissan Leaf go head to head when it comes to comparing their price, range, charging and self-driving features. Let's compare their size, charging speed and several other parameters to see who wins.
Advertisement

You know, Tesla Model 3 is not a hatchback. Model 3 has much longer range than Nissan Leaf and even the Chevy Bolt. The tech there is amazing. The supercharging network is something that always will give Tesla in a different class of a car. The pricing of these there cars is different as well.

I think the Chevy Bolt and the 2018 Nissan Leaf are the two cars that are going to compete for the space where people, you know, have a budget for their car, but they want to get an electric car that has a decent range.

Let's start with the range of these two cars. The 2018 Nissan Leaf just came out. Nissan announced that it's going to have about 150 miles, but the next year they are going to introduce an upgraded version with longer range. People are saying it's going to be 200-220 miles per charge, which is what pretty much the Bolt has right now. Currently, Chevy Bolt has 238 miles of range per charge.

Of course, at this point Chevy Bolt wins the range battle vs the Nissan Leaf. In fact, Bolt has the best EV range of any manufacturer out there that is not Tesla. That's actually very impressive.

Now, we will have to see what Nissan does with the upgraded version of the Leaf, but for now its 150 miles of range per single charge.

Budget is an important thing when making a decision to buy a car. Nissan leaf here has an advantage, of course because the range is shorter.

2018 Nissan Leaf's price starts at 30,000 dollars vs Chevy Bolt's price starting at 37,000 dollars. As you can see there is quite a difference in price. The Leaf has an advantage if you don't mind the difference int the range, which is almost 80 miles. I am sure the price of the Leaf will go up when Nissan comes up with a longer range and it's probably going to get closer to the 37,000 dollar range that the Chevy Bolt has right now. But at this point, if you are comfortable with the Nissan Leaf's range, the Leaf wins as far as the pricing is concerned.

I really don't care that much about horsepower. I think in this class of car people don't care about HP either. However, nevertheless that's 147 hp for the Nissan Leaf and 200 hp for Chevy Bolt.

As you can see there is a bit of difference, but don't forget, electric cars are known for really awesome torque, especially Chevy Bolt. I personally drove the Bolt (I am going to drive the new Leaf in 2-3 weeks), and the torque is pretty impressive for a tiny little electric car. It does have a little bit of a lag for me (though some people say it doesn't have it for them), but the torque is what it's all about.

Now, this is where Nissan Leaf is obviously ahead. Nissan has the Propilot feature, which is very comparable with what Tesla has as far as keeping the car in the lane, keeping the distance between the cars ahead of you and Nissan also has this one pedal driving feature where you can literally just drive it with one pedal like a golf cart. I am not quite sure if this last feature is going to catch on, but nevertheless Nissan has all these features and its available where the Chevy Bolt doesn't have any of those features. This is kind of surprising because people always hear news about autonomous driving. Apparently Chevy is testing some autonomous driving features and I have heard they may be a little bit ahead of Tesla at this point, but that's not on the market yet.

As a matter of fact we don't know if Chevy is going to use these features in the cars or simply using it for its own Uber-like service. But for now, unfortunately Bolt loses on this one.

2018 Nissan Leaf has the advantage here. 2018 Nissan Leaf has 23.6 cubic feet vs Chevy Bolt's 16.9 cubic feet. This is pretty important because people buy hatchbacks because they want to fit stuff in their cars. As a matter of fact I like my Model S because I can fit my hockey goalie gear, which takes a lot of space.

The Level 2 charging is pretty equal. 2018 Nissan Leaf has 22 miles per hour vs Chevy Bolt having 25 miles per hour. The Bolt is just a little bit faster.

I think this is where Nissan Leaf really screwed up here. I mean the Active Thermal Management system. This is the way the car cools its battery. This is very important. If you don't cool your battery the battery will degrade faster. But if you cool it down with the Active Thermal Management system then your battery will not degrade as fast as it would otherwise. The Nissan Leaf is known for its battery going down quickly and the range going down really quickly because of the battery degradation. And unfortunately Nissan still doesn't have this cooling system in the 2018 version of the Leaf. Bolt has it and you should expect replacing your Leaf's battery way before the Bolt's.

Of course, the time will tell. Nissan is saying the way it has designed the new Leaf is much better and doesn't maybe even need the Active Thermal Management system, but I don't think anyone is buying that. So this 5 year 60,000 mile warranty may come in handy, though a lot of people report disputes of what it means when the battery is going bad. I think there is a gray area there because replacing the battery is expensive. You may want to look into this area to see if you are comfortable with it before buying the Leaf or at least discuss this clearly with your dealer.

Let's talk about the interior of both of these electric cars. Now, I have been in both cars and have to say that Nissan Leaf is OK. You know, it's your average compact car interior. I don't think they have updated it that much and it's OK. Now the Bolt I am much more impressed with. I like its heads up display and the touchscreen on your right hand. I don't know, but I thought the Chevy Bolt's interior is more like tech friendly. In my opinion the Bolt's interior, while nothing special, appears to be more tech friendly and I just like it better.

The 2018 Nissan Leaf has an optional navigation system added to your package, but the Bolt has it only through your mobile phone, which actually is preferred by a lot of people. I am a Tesla Model S driver and have to say that sometimes Google Maps will give me a better results and estimated times than Tesla's navigation system. They probably calculate traffic in different ways. Here is which navigation system to use for in your Tesla Model S for best traffic experience.

In conclusion I want to say that if I missed anything in this comparison or the video presentation (see below), please let me know in the comments section. Because, you know, so many people care about so many other things that what's important for me, may not be so important for you or another driver. May be you care about the spare tire that's not in a car. Let's discuss them in the comments section below, please. In the meantime you are welcome to watch my video of comparing Chevy Bolt vs the 2018 Nissan leaf below.