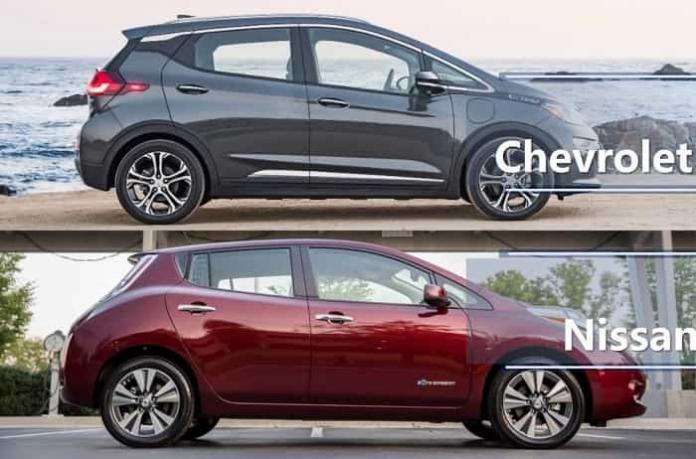 After 3 Years of Nissan Leaf Now Chevy Bolt and Comparison

Man who drove his 2015 Nissan Leaf for three years moves to Chevy Bolt for a longer range, loves both cars and shares his observations as a comparison between the two.
Advertisement

David Fox from Los Angeles, who leased a 2015 NIssan Leaf and moved to Chevy Bolt after his lease was over, posted in SF Bay Area Nissan Leaf Owners public group on Facebook about his experience driving both cars. He has a very interesting comparison of Nissan Leaf vs Chevy Bolt and the group being publicly available TorqueNews decided to share it here for our readers.

Here is David in his own words.

Having been a very happy 2015 Leaf owner for three years, our lease was up last month and we really wanted an EV with much higher range. We opted to lease the Chevy Bolt EV since the new Leaf wouldn't be out for a while (and reports were that the range, at least initially, wouldn't be what we needed) and the Tesla Model 3 likely even longer (since I missed the boat and didn't register for one in the first few days). I still have happy Leaf thoughts, and maybe in three years I'll be back.

We've now put about 1700 miles on our Bolt, including a mostly non-stop drive from Marin to Carmel...

We have the Premiere level trim, with all the extras: Infotainment package,
Driver Confidence 2 package, Fast Charger. Premiere trim includes leather seats. I don't know if they're more or less comfortable than the fabric covered ones.

Pros:
Range range range!! You get used to it after a while, but that background range anxiety we had with our Leaf has now evaporated with our Bolt. We have a recurring 70 round trip drive to Pleasant Hill. If we drove at normal freeway speeds and kept the air conditioning on, we'd likely get very close to running out, maybe 15 miles left. So we'd either not take the Leaf (taking our old Prius instead), or we'd keep speeds to 55 or less, and avoid using air conditioning or heat, and we'd get home with 25 miles. Now, not at all an issue. Took the same trip yesterday, plus several side trips and stops, and got home with 178 miles left, and we didn't even start with a full charge (it said 250 when we began, but we hadn't plugged in for a few days and had a few local trips).

Besides our Carmel trip, we haven't pushed it yet, to see how far we could go on one charge. But our car will often indicate we have closer to 275 in range than 238, if we're mostly doing around town driving.

Instrumentation is nice, and I really like using CarPlay with our iPhones. Having 4 USB ports built-in is great (not sure if that's only in our Infotainment 2 package). Using Siri is so much easier than fumbling for controls as well. Usually works well.

Acceleration is perfect, at least as nimble as our 2015 Leaf was, maybe better. I rarely use it, though. 17 years of Prius driving has made it hard for me to "waste" energy while driving. But it's there when I need it. I still have not even tried the Sports mode.

One-pedal driving is my favorite feature. It just feels so right now. If you lift your foot off fast, there's usually plenty of decceleration to bring us to a full stop at at traffic light, and the brake pedal's still there if we need it. I find it much less stressful. Also brings back pleasant memories of 5-year-old me at Disneyland's Autopia ride where I believe they also had one-pedal driving. So I'm constantly driving a really fun amusement park vehicle.

I'm 6' tall, 180, so I appreciate the extra leg room. I was surprised how far I could set the front seat back, maybe 6" or more further back than the Leaf. I don't need it though. But taller drivers might. Also, easier for me to get into/out of the car with its tall roof and absence of a sill at the bottom of the door opening.

Cons:
Bumpy ride... some people like the sporty feel, but I'd rather it be smoother over bumps. Even our 3-year-old grandson said, "Why is this car so bumpy?" the first time he rode in it. You really have to take speed bumps at 5 mph, avoid potholes, and certain rough roads (like the 580 near the Oakland Airport) are a real challenge to drive over.

During my 30 minute test drive around San Anselmo, I didn't notice this. Either we went over smooth roads, or I was just having so much fun driving it I didn't notice. So it came as a surprise to me when we had our Bolt for the first few days. So be sure to take a thorough test drive, over rough roads if possible, and see if you're ok with the ride.

Seats... I'm ok with them. I'd like them to be cushier, and maybe a bit wider, but I fit ok. At first, it felt like I was being forced to lean forward, with the bump near the top of the seat hitting me right at the rounded part of my back. But when I adjusted the seatback back a couple of notches, I fit much better, and had no aches/pains after driving for 3 hours. I do know of people who have removed the seat cover and inserted additional padding and then put the cover back (I don't think a cushion on top is a great idea since then you wouldn't be able to use the heated seats feature). There are videos online showing you how to remove the clips and make the installation...

One person in Marin actually had the seats redone at shop for about $900... Not an optimal solution, especially if you're leasing as we are.

No GPS... saves money, but I'm not used to plugging in my phone and using Apple Maps every time. On the plus side, no need to update GPS DVD disks at $300 a pop (at least for the Prius ones).

Charging times... We ended up springing for a Level 2 charger for our home. We never needed one for our Leaf since we could always fully charge it over night. Not so with the Bolt. Besides maybe charging a bit slower under Level 1 (4 miles per hour vs maybe 6 miles per hour on the Leaf), it would take 48 hours of steady charging to get to full. And if we go for cheap rate charging only, it would take maybe 4-5 days. So the Level 2 is definitely helpful, at 25 miles per hour charge.

I haven't yet used a Level 3 charger. But I've read stories that the Bolt's charging profile causes it to back off of full charging rates much sooner than the Leaf's 80% point... Someone said they charged only 53 miles in the first 30 minutes. This could make taking trips to LA more time consuming. Not an issue if you have a couple hours to wait, but it's not going to be a Tesla-like 20-30 minutes for a full charge. We may decide to either rent a different car for an LA trip, or borrow back our Prius (now with our daughter, we're a one-car family now).

Federal tax rebate... While Nissan took the entire $7500 off the sticker price of our leased car, GM has some weird formula, resulting in closer to $5000 off. So you won't get the same discount you might expect. If you purchase, of course, you will get it.

So, all in all, we're really happy with the car. I definitely liked the Leaf's seats and softer interior finish, and definitely its ride (and our Prius's) more than the Bolts. But we're already getting used to this.

Try for an hour or two test drive! Or better, if you can rent one for a few days and see what you think. Watch the seats and the ride.

If you decide to buy, get bids from multiple dealers. We ended up buying from Novato Chevrolet, but their first offer was $75/month higher than what we ended up paying, after getting much better bids from Santa Rosa, Petaluma, and Colma. They want your business (I think they have extra Bolts on their lots). We maybe could have done better if I did another round of bidding, but felt it would be diminishing returns. Also, end of the month purchase is better.

I'm sure I left a lot out. Ask me what you want to know and I'll be happy to respond.