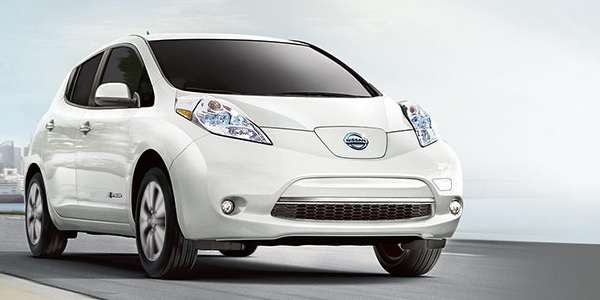 Many owners choose to buy their Nissan LEAF, but many others prefer the lease option and naturally search for better deals on new LEAF. Nissan has already unveiled its holiday 2015 LEAF lease deal the details of which are below.
Advertisement

On it's national website Nissan has the following details for the lease of the 2015 LEAF during the holidays.

Electric car lovers can now lease the 2015 Nissan LEAF for 199 dollars per month. The deal is for 36 months. But you need to make an initial $2,399 dollar down payment to get this holiday lease discount.

However, the holiday lease deal fot eh 2015 Nissan LEAF SL with Pearl White Paint, shown in the picture, leases for $303 per month.

Although Nissan has named this offer as Holiday Event, it ends on November 30th. I am assuming a special pre-Christmas and Christmas sales events will follow after this one expires in few days.

Nissan says this lease deal with the initial down payment includes the payment for the first month. The automaker also applies $10,925 manufacturer's rebate, which is included in this $199 per month lease deal.

If anyone takes this lease and pays 199 dollars per month, the monthly payments will total 7000+ dollars after 36 months. Nissan offers you to buy the LEAF at lease end for 8,659 dollars.

While Nissan LEAF is 100 percent electric car, the company on it's lease sales page lists the MPG numbers for comparison. The city/hwy comparable MPG of the 2015 LEAF is 126/101.

I asked current Leaf owners about this and its relevancy and they said that here Nissan compares the cost using set kwh and gallon of gas prices. Those should be indicated on the sticker, but it is best to do your own calculations using your actual energy costs and miles per kwh. Losses in charging should also be taken into account. This is why some current LEAF drivers think it's completely irrelevant because cost per mile varies so much depending on where you charge. At least it gives some idea to compare.

Nissan Leaf Lease vs Buy
See our previous coverage titled Month to Month Leasing of Nissan LEAF a Good Alternative to Buying a Used One.

Greg wrote on November 30, 2015 - 1:46pm Permalink
I doubt anyone can get this $199 per month lease as it most likely does not include the dealer option of the reverse camera and the higher level 3 charger that the dealers automatically install and you would be hard pressed to find a base model leaf without these options, that's what happened to us, we ended up with a $222 per month lease because of this irriversable dealer option, we would have loved the $199 lease because I never use either of the options, I don't trust the reverse camera and don't use it, and I only used the 440 charger once to see how it works, really don't need it, I use my 110 at home and sometimes the 220 at free charge stations
Talis wrote on December 17, 2015 - 5:19pm Permalink
The fast 440V level 3 charger is a must. Even if you dont use it, whoever sells the car, will need it. I think once chargers become common, you will be using it very often, and you must use it on trips.
mike w wrote on November 30, 2015 - 8:53pm Permalink
Is this a national offer or just certain regions? The local dealer here in Manassas is advertising a "Total" lease cost of $22K+ for a 2015 white SV with the DCFC charge point.
Talis wrote on December 17, 2015 - 7:47pm Permalink
The DCFC port is a must, also for resell.