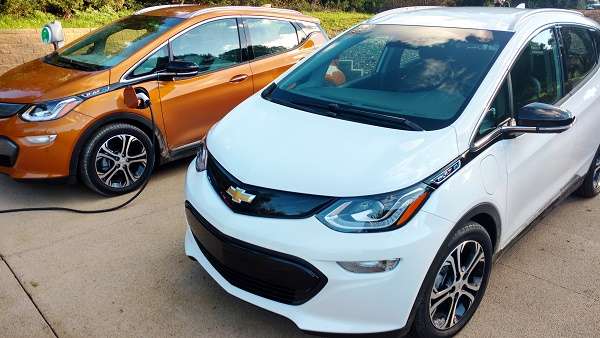 2017 Chevy Bolt is a wake up call for U.S. automakers, as the maker of Corvette, Silverado Pickup, and Malibu SS, presents an affordable BEV (battery electric vehicle) that gives Tesla an extended drive-range run for the money.
Advertisement

General Motors has experimented with electrifying the car for decades, and has enjoyed some market success. Presently, the Chevy Volt hybrid drives the streets of America, and Volt owners interviewed respond with positive accolades, with a caveat or two -- they want more electric only range, and bigger, would be better -- Bolt presents both.

Sliding onto the driver’s seat of the all new 2017 Chevy Bolt 5-door hatchback plug-in-electric, was not only a comfortable spacious experience, but on first drive, hammered home the fact that General Motors through the advent of Bolt “normalized’ the EV experience, while effectively mainstreaming the electric vehicle. Simply put, Bolt is a great car.

Our test ride for the day is the fully optioned 2017 Volt Premier with a stated MSRP of $41,885 +.It’s impressive. And, at its tech rich core -- the epitome of electricity motivated automation.

2017 Chevy Bolt EV is General Motors first mass produced 5-door crossover-like hatchback. It’s available with an MSRP starting at $37,495.(before federal and state tax credit incentives) This measurably fun to drive, imagination expanding hatchback, claims an EPA estimated 238 miles between charge cycles. And that’s good, but not what this gearhead finds most compelling when considering the purchase of this very viable full-drive-time electric.

At the heart of every Bolt EV rests a “climatized,” and highly monitored 10 cell battery module 2017 Chevy Bolt is the first stand-alone electric plugin that I could justify purchasing as my sole mode of transportation. The price is right, and proven component and battery module reliability is a given, backed by an 8-year 100,000 mile warranty. Furthermore, I discovered the Korean co-designed and U.S. manufactured Chevy Bolt to drive, ride, and handle well, while traversing the country roads and city streets of San Francisco Bay’s urbane expanse.

Bolt EV eliminates “range anxiety” while capitalizing on electric vehicle quickness. Truthfully, one forgets they’re driving electric within minutes of taking the wheel. And that’s precisely what GM engineers had in mind when designing Bolt -- it’s that good. The award winning 2017 Chevy Bolt E.V. is Green Car Journal's Car of the Year. As my co-driver and I transitioned from Half Moon Bay to the streets of San Francisco, I found Bolt’s in-city maneuverability and ease of parking to be exceptional. Very little to no electric motor noise was noted, mirror wind noise was minimal, as was tire to street transmitted noise to the cab -- thanks to advanced glass and car body noise deadening provisions.

The compact gel foam seats are unusually comfortable for a subcompact car -- affording ease of adjustment, good driver to control positioning, and, due to Bolt’s relatively high body line, accommodated my 6 ft 5 inch frame in the second row, without compromise of position or comfort. After a few moments of acquainting myself with Bolt’s center stack, and segmented digital instrument cluster, I found 2017 Bolt to be near intuitive as to operation, and driver to car personal electronic connectivity. Although we utilized a hand held map book for this initial drive review (Chevy?) I easily paired my Droid to Bolt, and navigated Via Google Maps. No worries!

Granted, I may drive more like a very cool grandfather than the auto sport enthusiast of my youth. But truthfully, I didn’t hold back on pushing 2017 Bolt EV to what in a conventionally powered car would be the red line. With Korean General Motors Bolt EV design lead Ms. Sang Yeon Cho in the navigator’s seat, after 2.5 hours of speeds up to 75 MPH, variable terrain and road surface drive time, our test mule showed 130 miles remaining on the range-minder. That’s just a bit of a mind blower! I discover no sacrifice as to extended-drive-range, driver and passenger convenience features, comfort, quality of construction, or available electronic active safety features in this compact electric. 2017 Chevy Bolt effectively “normalizes” the electric car, while firing a warning shot across the bow of the auto industry. The future of personal transportation is an electric one. Chevy Bolt departs to that future, now!