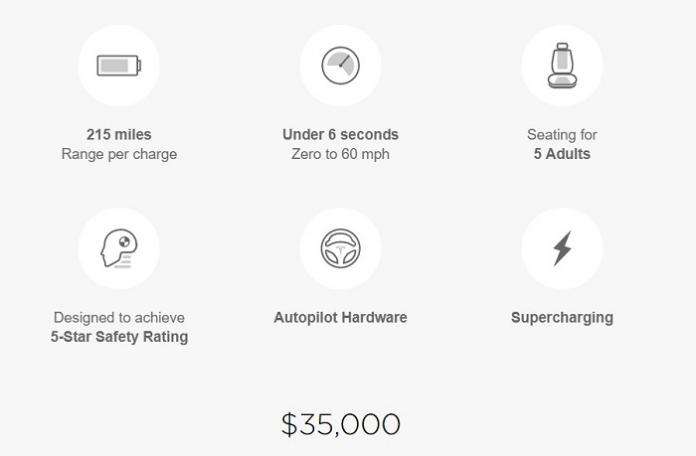 Tesla Model 3 Key Specs Show That Its Fast and Safe

Here are the eight key specs about Tesla Model 3 that everyone who follows Tesla (TSLA) or the EV industry needs to know.
Advertisement

Tesla Model 3, which made big news early this week, informing that it's basically already coming out of the assembly line has 8 key specifications that we know about and are going to describe in this story. Let's talk about Tesla Model 3's price, seating capacity, battery, range, speed, safety, room in the back and self-driving technology. I have to be honest here, I am not a fan of self-driving technology for number of reasons that are out of the scope of this article.

Thus, let's look at the 8 key specs of Tesla Model 3 below.

The MSRP of Model 3 is $35,000. It's almost twice cheaper than its predecessor Model S and has a comparable price with its closest competitor 2018 Nissan Leaf, spy shots of which already emerged in Japanese roads.

Tesla Model 3 comes with a self-driving technology. A kind of an Auto Pilot. And according to Tesla it safe and has 5-star safety rating.

Room in The Back

Unlike many other sedans, Tesla Model 3's rear seats can be folded providing a sleeping place. When folding they make nearly 66 inches of space available. Three adults can easily sit in the back.

It has 5-star safety rating. We mentioned it above when discussing the self-driving technology, but Model 3 has overall safety rating of 5 stars. Tesla engineers say they designed the car specifically to achieve this rating. On the other hand, we can't say that about Model S. See Tesla Model S At Bottom of IIHS Test Results - Again.

Tesla likes to say it doesn't make slow cars. From a consumer point of view this is important because in many peoples' minds EVs are associated with slow speed. This is not always true. Tesla Model 3 can reach from 0 to 60 in 6 seconds.

Range of The Model 3 Per Charge

Tesla Model 3 provides comfortable driving range. The range per charge is 215 miles. Supercharging is used to charge Model 3 vehicles, but take a look at this new and innovative idea that proposes to charge future Tesla vehicles using a drone while the car is on the go.

Seating is for 5 adults. Two people in the front and three people in the back. As mentioned above there folding seats int he back make more space available for rear seat passengers.

Let us know in the comments section if we need to add more specs as they become available. Also see this detailed comparison of 2017 Chevy Bolt vs. Tesla Model 3.