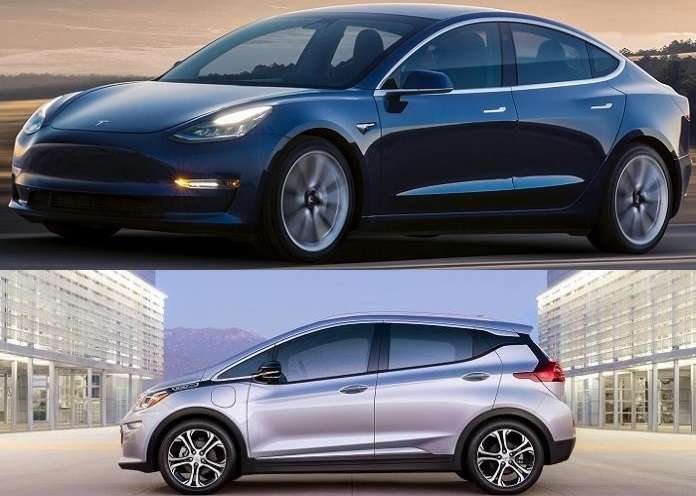 Facts, figures, and the promises of the two most exciting battery electric vehicles on the horizon: 2017 Chevy Bolt vs. Tesla Model 3.
Advertisement

This past week Tesla previewed its first affordable vehicle, the 2017 Model 3. This new battery electric vehicle (BEV) will be Tesla’s first mainstream car and will also be its first intended for mainstream levels of production. Chevy also has a new BEV coming, much sooner, and it too is slated for wide-scale adoption, not just niche sales in limited markets. Let’s compare and contrast the two most exciting EVs headed to market.

When General Motors pulled the wraps off its new 2017 Bolt at the Consumer Electronics Show, the company promised that it “…will go into production by the end of 2016.” GM also promised that the new Bolt will be available in all 50 U.S. states. That is important because some green cars, like its Volt, are not sold in all locations, but rather, just limited markets that follow CARB mandates.

Tesla is planning a late 2017 launch of the Model 3, so it will come a full year later than the Bolt if both GM and Tesla stick to their promises. At the launch event, Elon Musk chuckled when speaking about the Model 3’s launch date and said, “So, I do feel fairly confident it will be next year.” His tone spoke volumes. If Tesla does hit its planned launch schedule, it will be a first for the company. Tesla is also hedging on who can get a Model 3. In a detailed update e-mailed to fans, Tesla said that existing owners of a Tesla Model S or X, who make a reservation now (about 200,000 people have) and who live in California, will be the first to take delivery. If you don’t meet these conditions, plan on seeing a Model 3 no sooner than mid to late 2018.

Prices of unreleased vehicles are always ball-park figures, but in the case of affordable EVs the base prices have added importance. Tesla says that its Model 3 will have a starting price of just $35,000. That is very close to the average new-vehicle transaction price in the U.S. vehicle market. Tesla also says that the base car will be no slouch and will include the hardware for autopilot (but not the system) and will have forward crash prevention with emergency braking (most cars will by the time the Model 3 goes on sale.) Normally, we talk about tax breaks and incentives at this point, but will the Model 3 be eligible for a federal tax break? Maybe not. Tesla is already at about 70K vehicles on the 200K it can make that will be eligible for the federal tax break of $7,500. With fully two years to sell its Model S and Model X cars, it seems as if very few Model 3 owners will ever have the chance at the current federal EV tax incentive. Some will, but how many more than the first handful is anyone’s guess.

Chevy says the Bolt will have a “target price of around $30,000.” This according to its February press release on the Bolt. However, in its later marketing materials it lists a $37,500 starting point and mentions the federal tax deduction of $7,500. Bolt buyers will be eligible for that deduction (if their personal finances line up right), and many Tesla Model 3's may not be eligible. Chevy also sells its vehicles at a discount from its MSPR, whereas Tesla owners pay full asking price. We will know more soon. The production start for Bolt is only six to eight months away.

Both Chevy and Tesla have committed to more than 200 miles in range for the Bolt and Model 3. Speculation beyond that is meaningless, but fun. Tesla would seem to have an edge here. We would expect Tesla to offer multiple trims with varying ranges.

Elon Musk declared this week that Tesla does not make slow cars. Nobody has ever accused it of doing so, but it is good to hear. He promised that the base Model 3 would run from 0-60 MPH in under six seconds. That is about as quick as a Mazda Miata and about as fast as a BMW 328 or Lexus IS 350. That is quick and Tesla will no doubt have a sporty model that goes faster for more money. Maybe a lot more. Tesla’s fastest Model S is about twice the price as its base model.

The Bolt may have trouble keeping up. However, Chevy knows a thing or two about making cars quick. It will be interesting to see how the Bolt does when it is released this fall.

There is much more to say about both these cars, but Tesla has not yet gone into any detail on its infotainment system, charging capability or other specifications except to say that the Model 3 will be compatible with the Supercharger network. When the Model 3 is updated, we will bring you more details.

Related Stories:
Why did the workers at the Tesla Gigafactory just walk off the job?
2016 Toyota Prius Eco beating EVs by about 20% in cost per mile
Battery Electric Vehicles Make Up 0.3% of Current U.S. Auto Sales

mike w wrote on April 5, 2016 - 7:13pm Permalink
With over 300,000 reservations for the model 3 it will be some time before supply catches up with demand. If you don't have a reservation now you might be waiting until 2020 to pick one up. The really great thing about Tesla is the super charger network and right now access to that network may not be free for model 3 owners. Differences in quality aside the Bolt looks like it will be a bit cheaper with normal door handles and say a 8 inch touch screen. Fast charging network may be a challenge for Bolt sales.
Wayne wrote on April 6, 2016 - 1:01am Permalink
Why does every article quote a price of $30,000 for the Chevy Bolt. No one seems to notice the little asterisk that Chevy uses each time they mention the $30k price (that is after the federal $7500 rebate). The official price that Chevy has quoted is $37,500 for the base model of the Chevy Bolt. So the base Bolt is $2500 more than the Tesla. Let's compare apples to apples.
John Goreham wrote on April 6, 2016 - 10:35am Permalink
Wayne. You're right. I am amending the article. Thanks for the heads up.
Charlotte Omoto wrote on April 6, 2016 - 1:54pm Permalink
What more information do you need about charging capability?
John Goreham wrote on April 7, 2016 - 9:55am Permalink
One fact on charging I have not been able to confirm is if no-cost charging at Tesla's Superchargers will be included on all Model 3 vehicles. If you have a direct Tesla source (link) that would be very helpful. I have seen Tesla say the 3 will be able to use the Superchargers, but not if it will be at no added cost (for electricity).
RickS wrote on June 10, 2016 - 8:56pm Permalink
I am interested to know if GM's quoted range is best case of like Tesla range doing 65 mph. If GM range is best case that is not nearly the same as Tesla. Under city driving it is conceivable that the Model 3 will get at least 30% more range....making it nearly 300 mphs per charge...more with battery upgrades. Also would be nice to know if Bolt will have same battery upgrade options....I know the Leaf and Kia EV do not.
mike w. wrote on June 12, 2016 - 7:14pm Permalink
without having either of these cars on the "road" yet its not easy to say. I would speculate that the range advertised by both companies will be the EPA rating. Would not expect GM to offer battery options. Being the former owner of a Nissan Leaf and the current owner of a 2016 Volt I would say GM has a tendency to under advertise and over deliver. Our Volt usually delivers 70 miles on a charge. Recent A/C usage has cut in to that a bit.