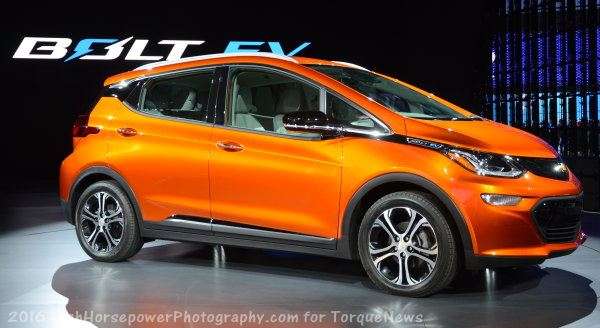 The new Chevrolet Bolt EV made its formal production debut earlier this week at the 2016 North American International Auto Show in Detroit, bringing us the full details on the industry’s most capable, affordable electric vehicle.
Advertisement

The Chevrolet Bolt EV was first introduced at the 2015 North American International Auto Show in concept form and at this year’s Detroit show, GM rolled out the production version of the new all-electric Chevy hatchback. This gave us our first look at the Bolt EV in the same form that we will see in dealerships later this year, but more importantly, the production debut of this new electric Chevy came with all of the vital specifications for what could become the leader in the American EV segment.

Chevy Bolt EV Specs
First and foremost, I have read some online discussions about the new Chevrolet Bolt and there are clearly some folks who believe that the new Bolt is a differently shaped, new-and-improved Chevy Volt. That is not the case. The Volt is an electric vehicle with a range-extending gasoline engine while the new Bolt is a pure electric vehicle – no gasoline engine at all.

The heart of the new Chevrolet Bolt is an electric drive system featuring a 60kWh flat battery system mounted in the floor, which sends juice to the 150kW magnetic drive motor. This setup offers 200 horsepower and 266lb-ft of torque, which will allow the Bolt to dash from 0-60 in under 7 seconds while hitting a top speed of 91 miles per hour. Far more importantly, this drive system will allow the Bolt to travel more than 200 miles on a fully charged battery.

For comparison, the Nissan Leaf – which is the top competitor for the new Chevy Bolt – offers just 107 horsepower, 187lb-ft of torque and 107 miles of driving range. The Bolt is a touch heavier (3,580 to 3,391), but that dramatic advantage in both horsepower and torque should go a long way in making the electric Chevy more fun to drive – while also being able to go roughly twice as far as the Leaf on a full charge.

Smokin’ Fast Charging
The Chevrolet Bolt EV has an incredible advantage in range over the Nissan Leaf, but in the event that you do run the battery down very far, the Bolt has impressively short charging times.

When using the on-board Level 2 EVSE charging system, the Chevy Bolt battery system will go from near-dead to 50 miles of range in just 2 hours and fully charging the battery will take around 9 hours. When using an SAE DC Fast Charging system, the Bolt will build 90 miles of range in just 30 minutes so for those who live in a city with a strong electric vehicle infrastructure, range anxiety should literally never be an issue. Even with a normal charging station, an 8-hour work shift with your Bolt plugged in outside will likely have the battery fully charged when you are ready to go home.

Starting at $37,500
The Chevrolet Bolt EV will have a starting price of $37,500 when it hits dealerships later this year, but that price doesn’t include any of the tax rebates that come with buying an electric vehicle. There is currently a $7,500 federal tax credit and local credits can run as high at $2,500, so the all-electric Bolt can be had for well under $30,000 for those in EV-friendly areas such as California.

The 2017 Chevrolet Bolt is expected to reach dealerships before the end of 2016, but it is unclear whether that launch will be all over the country, or just in some regions. If the past launch of electric vehicles has taught us anything, it is that the automaker will put EV-heavy areas like California first when the Bolt goes on sale.