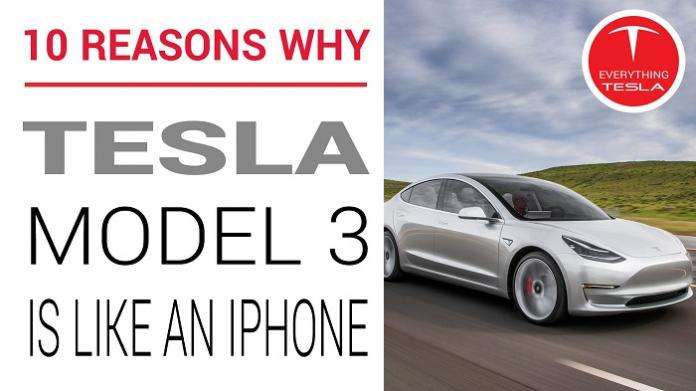 Here are the top 10 reasons why Alex Guberman, the host and founder of Everything Tesla YouTube channel thinks the Model will be remembered as the iPhone of the car industry.
Advertisement

These points are not in particular order, but Guberman thinks the number one is Tesla's Self-Driving feature, which is going to change many things in the car industry, just like iPhone has.

A lot of people are amazed by what it is even now that people actually can see Tesla drivers letting the wheel go and it will turn, drive the car, keep the distance, park itself. These are all amazing features, but we all know that this is in its infant state. The end game is going to be that in the near future these cars will become like carriages. In the near future being in a car is not going to mean driving it, but the car itself will take care of your moving from point A to point B. In the meantime, you will be able to do something else.

And this is a game changer. Imagine of having an extra 2-3 hours of time that many people normally spend on the road, now they can use that time for something else. For example, you drive your kids to school, then you drive to work, then you return and pick up your kids from school. These things take time of driving. Now, you will be able to do something else while your car takes you from point A to point B.

This is going to change many things in this world and the way we live out lives much like an iPhone has.

Touch screen was a big deal for iPhone. Tesla is going for touch screen. Number of car companies had touch screen, but they went back to regular buttons.

When electric cars came out they weren't really cool. People thought they are just little ugly-looking cars that just don't go too far. People thought EVs don't have that much to offer and that was true to some extent. This can be true to Toyota Prius and Nissan Leaf, which Guberman calls embarrassment for the technology they offer.

But when Tesla came in, it started to revive things just like iPhone. Couberman things EVs could have died without Tesla or could have just become a small niche if Tesla didn't come to the market.

The Tesla Model 3 is going to make the electric cars cool again. There is Model S and Model X and they are cool cars too, but most people look at Tesla right now as the toy of a luxury for the rich people.

But now when Model 3 is here and the most people in the middle class can afford it that will force many people to look at it as a real car and say "you know, I never thought about this, but the electric cars are actually cool." Tesla Model 3 looks great, it has all these cool technologies and it has a lot of power.

By the way, who would ever thought that the electric cars will have all this amazing torque power to compete with Porsches and Ferraris. That alone is amazing. This is why people's opinions are really changing and Model 3 is going to push that.

A lot of people are going to start thinking that the electric cars are cool and they are actually better than the gas cars. In fact, a lot of people who bought Tesla Model S or Model X, didn't buy because they necessarily care about the environment, but because they thought that these are great looking cool cars and they are somewhat better than the rest in the industry.

This is not here yet, but soon there will be an App store for cars. You can already see a few apps that are built into the Teslas (the navigation system, the music, the camera), but you know, they are primitive and they are made by the manufacturer, just like it started with an iPhone.

But once they open it up for the people to make apps for cars I can't even imagine what people will build. There will be companies that will make billions of dollars by making special apps for cars. I think they are in the near future and they are going to make the self driving cars even more enjoyable, says Guberman.

Let's be honest, in the past few decades America wasn't really the country that people can have counted on to produce good cars. You know, if you wanted a good car with a reliable technology you would go with a Japanese car. If you wanted a high performance car, you would go with a German or Italian car. In much like an iPhone, Tesla is going to change that. Many people will start say that this American car manufacturer makes great cars, just like an iPhone came and Apple took over becoming the leading and one of the best electronic companies in the world.

That is a refreshing thought for at least those people, who live in the United States. And once again, this is something that someone disrupts many things in the world's car industry.

With Tesla you don't have a model term. You can have upgraded features within a year or as soon as they become available. For example, this year's Model S and Model X will have better performance even though they are the same car and the same model as the previous years' Model S and Model X vehicles. This is something that is totally disrupting the car industry by saying "no, if there is a new technology we are going to give it to our car buyers whenever it's ready, not whenever the artificial model term ends."

This is refreshing. It's going to push the technology and customer satisfaction many times, says Guberman.

Much like our iPhones these cars are going to be better in some cases because of new over the phone updates. For example, there were few updates with Teslas that people woke up in the morning and they cars became not only faster but they also were able to go further with the same charge.

I mean, think about that. You car just got better overnight by a single software update. You didn't have to do anything. That, does not happen with any gas car. Just like iPhone, Tesla Model 3 is going to have us experience cars in a completely different way.

This may seem a little boring, but still very useful. Tesla Services Centers can fix a lot of things in your car remotely. For example, if something is wrong with your Model 3, you can call the Tesla service center and they can dig around and fix many things in your car remotely from their location. There are logs that they see and the car is pretty good at self-diagnosing. There are plenty of sensors there that will give the service centers a lot of information to repair the car remotely in many cases in the future.

Two more things may happen too. In the future the car will be able to tell you what's wrong with it so you can take care of it on time, or it may not even need to tell you as through a software update it will repair itself. It will save you time and money and all the worries that come along with fixing cars that break.

It is really the control over a lot of services that you need in order to own a car. For instance the fuel. When Toyota or Ford sell you cars you are on your own when fueling the car. Tesla is disrupting that too. Tesla gives you charging stations, helps to install them and even helps you to generate electricity. In addition to this, Tesla says if you travel, we will make sure there are superchargers so you don't have to worry about it. So, this support system, infrastructure and assistance is part of the company and part of the Tesla brand.

Electric cars and particularly Tesla Model 3 are good for the planet and the environment. We still have a lot to do and a lot of way to go. For example, we need to make sure that the batteries are properly made and properly recycled, that the factories where they are made run on green energy. That's not happening just yet, but the cars are still better for the environment. Imagine a world where we don't need fossil fuels. May be we won't be getting in wars and all kinds of conflicts that are waged because of oil and oil interests, says Guberman in the video recording below. How awesome it is, that the side effect of cars like Tesla Model 3 is good for this planet.

We don't know what will happen yet, but we know that Tesla Model 3 is on the radar of the entire car industry and many people in the world. In many ways like Apple and iPhone Model 3 is not the luxury toy of Tesla, but makes Tesla a company that is cool and that makes good cars.