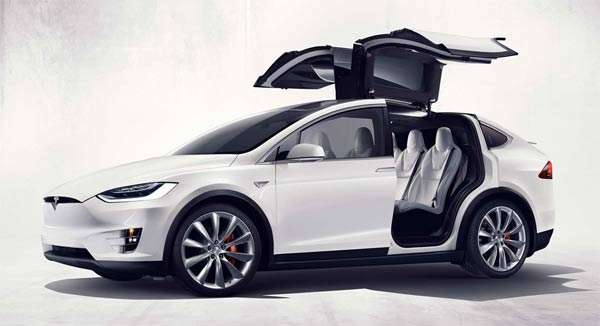 The 2017 Tesla Model X 75D could just be the electric SUV you have always wanted.
Advertisement

I think it's okay to have a little bit of favoritism in the car world and this is the case with the 2017 Tesla Model X. Yes, it may have those unusual gull/falcon doors, but this starter member of the Model X lineup is more impressive than you would first think.

The electric SUV comes standard as a five seater, but can be optioned up to 6 or seven seats. It has the shortest range in the lineup, but is also the most reasonably priced. You can't access Ludicrous mode in this vehicle, but that stands to sense as it will severely limit the range which is still a reasonable 238 miles and a 0 to 60 time of roughly 6.2 seconds. If you want to start hitting high 0-60 times, then you'll have to start with the P90D, doing it in 3.3 seconds and has a 250 mile range. Up from there you have the P100D with a 289 mile range and a 0 to 60 mph time of 2.9 seconds.

Oh those doors.....
On face value gullwing doors on an SUV may seem like a bad idea, but Tesla have thought about this and the doors intelligently move up and back with sensors behind the aluminum which will stop the doors hitting anything to their sides or above like a garage ceiling or your head. Once you have seen them in action they almost seem more sensible than traditional doors, still being able to open in tight spaces and provide a large entry point. However, they do take 5 1/2 seconds to open and 6 to close, which isn't the greatest if you are in a hurry. It may seem an odd design feature and something that will obviously increase the cost of the product, but they also seem to fit with the futuristic EV vehicle which Tesla obviously want to be pushing.

The model X shares many components with the Model S such as the chassis, electric motors and battery pack and just like the Model S, you have to climb up the model range to get the best performance, but the 75D is nowhere lacking. If you buy a model X now, it is also set up for full autonomous driving. You just have to do slowly wait for the software updates to roll out.

You can also up the ante by spending another $10,000 for the ludicrous mode which will also install a smart fuse which will increase the battery's output. However, it's probable that most people going for the 75D will want the acceleration blast now and then, but it's not on the priority list as much as the higher models.

The other association with the model S is its instrument panel, which is a 17 inch touchscreen, which controls almost all the vehicle's functionality. The interior is mostly soft leather and although it's not in the luxury car department, it still has the air of quality.

Although the Model X is still a more luxury vehicle even in the EV market, all things considered, it is still a fantastic vehicle and with the upcoming model 3 aiming to be a more cost-effective Ev car in the near future, the model X should also come down in price moving forward. The other thing is that a Tesla electric SUV still really stands on its own, so it's really if you can live with those Falcon doors which is the big decider here.