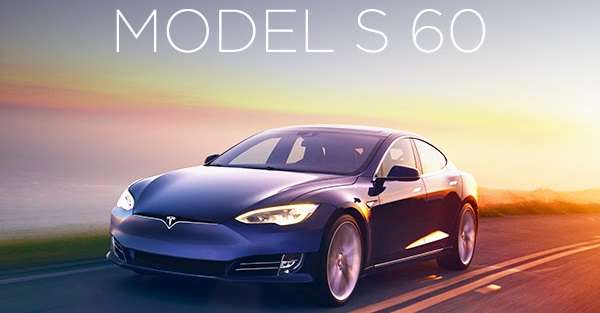 Yesterday Tesla sent out a press release announcing reintroduction of the the Model S 60. The price is lower than the S 70 and starts at $58,500 after incentives or $667 a month. The range of the Tesla Model S 60 is 210 miles per charge and it achieves a top speed of 130 mph. The zero-to-60 acceleration is 5.5 seconds.
Advertisement

Current Model S owners are sharing their impressions and opinions about Tesla's Model 60 and here are few interesting ones here that paint a comparison picture of Tesla Model S 70 vs Model S 60.

Lower price of S 60 vs Recently Increased Price of S 70
"Regarding the more affordable 60 kWh Model S announcement today. I ordered the 2016 refreshed 70 online on May 3. At that time, the site stated June delivery. On May 11, when my order was confirmed, I checked the site again for what it was now offering for new orders. It listed "Late June" delivery. On June 2, 30 days after ordering, production completed and the car's estimated delivery window is "June 27-July 11, 2016." (That's 25-40 days to deliver a completed vehicle or 69 days total.) No owner is surprised that Tesla over promises on its timelines... But Should I be disappointed about the new S 60 at the lower price vs. my 70 at its (recently increased) "refresh" price?" writes Jason in Tesla Model S Owners club.

Range: Model S 60 vs Model S 70
Someone suggested that it's never bad to have more range and that Model S 70 is a great car. Model S 70 owners won't be disappointed by the Model S 60 coming back. Tesla Model S 70 has 230 mile range, which is 20 miles more than the stated EPA estimate of 210 mile range of Model S 60.

Regarding the range anxiety, even some Model S 70 owners have it. "We have a 70D and I get range anxiety as it is. Although my friend drives a 60 and he told me to 'man up,'" writes Elaine in the group. Some Model S 70 owners voiced an opinion that Model S 60 is only practical for someone who is going to use it for work and has a short commute and can charge at work. And use it around town.

The Battery
There was an opinion about the battery of Tesla Model S 70 vs Model S 60. Since the 60 is still going to have a 75 battery in it, just software limited. What is the purpose? Does it cost Tesla more to unlock the battery if the car costs them the same price to make? But it is possible that it would cost Tesla more if they the company had to create two different battery packs.

"My experience with the ordering and delivery process was Tesla under promised and beat every time frame. As far as the 60 vs your car. It's going to be a wash. You will pay less for the 60, but if you ever want to unlock that extra range you will have to pay them the difference of what you paid," writes another group member, named Thomas.

"I have an early 60 that is now past 45k miles. Most of that is travel between San Jose and San Diego. No range issues after 2013. The Qualcomm supercharger solved our last range issue," writes another owner named Gary.

The new Model S 60 is a great deal because of the price and battery. "I have an early 60 and have never had range anxiety. I drive 160 miles around the Bay without too much worry. The new 60 is a great deal because you can charge to 100% without worry since it is really a 75. So, you get the same range as a 75 when you charge to 80%," writes Deepak.

Tesla says like all Tesla cars, the 60 and 60D come standard with active safety features and Autopilot hardware. And both versions can later be upgraded through a software update to 75 kWh for about 20% extra range.

If you are a Tesla Model S 70 or Model S 60 owner or just ordered one, how do you feel about this announcement and what has been your experience? Do you think the lower price of Model S 60 will gauge more interest in Tesla and Electric Cars, thus further helping the environment?