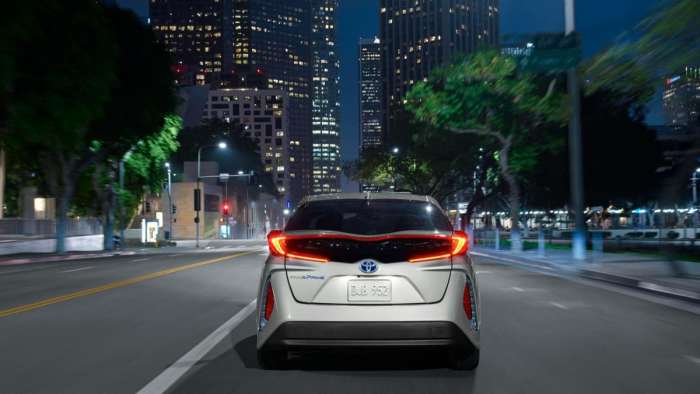 2019 Prius Prime Sales Give Toyota an EV Pass (For Now)

Toyota has taken a beating in the EV press for several months now, not least for their self-defeating "self-charging" ad campaigns. The continued success of the 2019 Toyota Prius Prime is their way out and up.
Advertisement

Toyota is deservedly associated with leading the charge to fuel-efficient vehicles. The Prius is the poster child for modern-day efficiency, and the Toyota Prius Prime plug-in hybrid electric vehicle (PHEV) was the top-selling affordable electric car of 2018.

Despite those achievements, Toyota has tarnished its reputation in many corners of the EV community with advertising that knocks all-electric models and using misleading terms to describe the technology of its hybrid vehicles. After all, if "self-charging" is the term of choice, every manufacturer with an EV capable of regenerative braking can make this claim with much more gusto than Toyota.

Thankfully, sales of the 2019 Prius Prime give Toyota a way out of the corner into which it has backed itself.

In May, sales of the 2019 Toyota Prius Prime topped the chart of the best-selling plug-in hybrids.

Now that GM has consigned the Chevy Volt to the annals of EV history, it's a two-horse race in the battle for PHEV supremacy.

The 2019 Honda Clarity Plug-in Hybrid held the top spot for the first two months of the year, but Toyota was the clear leader heading into Q2, as these sales estimates for the past three months demonstrate:

Watch U.S. EV Sales By Brand from 2012-2019 and See How Prius Was Doing and Click To Subscribe to Torque News Youtube for Daily News on Toyota and Auto Industry.

In total, Toyota outsold Honda by 65% in this category over this three month period. This success gives Toyota a way out of the corner into which it has backed itself with some electric vehicle enthusiasts.

See how Like Toyota, BMW is Accelerating EV Plans

Toyota Can Come Back from the Brink

Although the Prius Prime only has an EPA-estimated electric range of 25 miles, the fuel efficiency of 54 MPG and combined range of 640 miles attracts buyers who aren't yet ready to make the jump to an all-electric vehicle. Toyota offers these drivers the futuristic feel of a pure EV and the ability to plug in, without altogether abandoning the convenience of gasoline.

As Torque News Toyota writer John Goreham highlighted early this year:
"With 27,595 units sold in 2018, the Prius Prime from Toyota beat out the Bolt's 18,019 and Volt's 18,306 unit sales in the affordable EV market. Not only has the Prius Prime outpaced these two impressive EVs, the Prius Prime finished the year with a sales increase of 31%."

Read my recommendations to GM for improving the 2020 Chevy Bolt EV here.

Staunch advocates of electric-only models can make the case that reliance on gas stations still leaves the Prius Prime as a half-measure, but the reality is that there are still various use cases in which the available electric vehicles don't quite match their hybrid cousins.

We're moving closer to going all-electric every year, as Toyota itself has acknowledged by accelerating plans to electrify its fleet, but the plug-in hybrid still has a role to play in familiarizing drivers with battery electric technology and introducing them to the public charging ecosystem.

Read more about a significant factor limiting the progress of battery electric vehicles.

The continued success of the Prius Prime PHEV gives Toyota the bridge it needs to transition to all-electric vehicles.

By cutting out the negative advertising towards a technology that the automaker now freely admits it has underestimated, Toyota can reposition the brand.

Rather than sniping at the competition, Toyota can further the company’s legacy as a progressive force in the advancement of electric vehicles and use that status to help its broad base of hybrid drivers to make the move to an all-electric Toyota model in future.

Watch How He Made A Toyota Prius Hybrid Battery Last Past 350,000 Miles and Subscribe To Torque News Youtube for Daily News on Toyota and Car Industry.

Do you believe Toyota is committed to developing electric vehicles or are the company's efforts simply half-measures to save face and keep selling hybrids? Whatever your position, let us know what you think in the comments below.

See you in the next story in which I am going to write about why the Rivian R1T isn't the EV truck to convert pickup truck drivers.

Alan wrote on June 15, 2019 - 8:21am Permalink
It's still better to sell 1.5 million hybrids and plug-ins a year at a profit than to put all the batteries you can scrounge up into 100,000 EV's a year and sell them at a loss.
Alan wrote on June 15, 2019 - 8:30am Permalink
Article quote: "Toyota has tarnished its reputation in many corners of the EV community with advertising that knocks all-electric models and using misleading terms to describe the technology of its hybrid vehicles." Who cares how these ads affect EV fans? Who is going to avoid buying a future Toyota EV because of these ads? Who really believes these ads are going to hurt sales of hybrids and plug-ins?
Steve wrote on June 15, 2019 - 8:55am Permalink
One would hope Toyota would care, as they presumably want to sell all-electric models to these engaged buyers at some point in the future. It's almost a daily complaint against the company in the EV media, overblown in some cases but definitely undermining the brand in a segment Toyota now says it wants to occupy. Hybrid sales won't suffer, as the story shows, but all-electric sales down the line might.