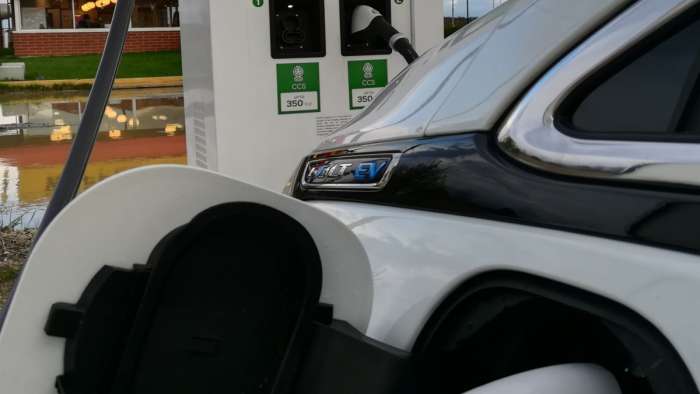 Attempting a straightforward 550-mile round trip from L.A. to Las Vegas in a 2019 Chevy Bolt EV, this NY Times reporter fails at basic trip planning, passing the buck for his errors to electric cars and charging networks.
Advertisement

Coverage of electric vehicles in the mainstream media could optimistically be described as hit or miss. The stories typically fall into one of two buckets:

1) Elon Musk just tweeted this and Tesla will soon be bankrupt.
2) Electric cars might be okay one day but I experienced an issue so don’t buy one.

A story in the New York Times over the weekend falls firmly into the second category, as a feckless reporter sets off from Los Angeles without understanding the car he’s driving. It’s entitled “L.A. to Vegas and Back by Electric Car: 8 Hours Driving; 5 More Plugged In,” which tells you all you need to know about the underlying intention of the piece.

To extract a positive from the pot luck of gloomy EV observations that follow, the writer does allow for some chinks of light, such as forecasts that electric cars will be much more common on US roads over the next five years and an acceptance that technology is advancing rapidly. For the most part, though, this is a laundry list of cherry-picked inconveniences that are rarely balanced with the many positives, such as waking up to a full charge at home or the myriad performance benefits of an electric car.

Instead, the writer forms the central theme of his article, inconvenience, around his badly planned trip and some poorly researched observations from other travelers en route.

He indirectly throws the Chevy Bolt EV under the bus as well, which might seem inconsequential but needs to be scrutinized, as the rest of the story falls apart when we dig into the details.

Yes, You Can Take Long Trips in a Chevy Bolt EV

Before I make the (open and shut) case for the Bolt EV being perfectly able to make this trip in just a fraction of that charge time, let’s make it clear that you can road trip in this car. Plenty of us document our journeys on YouTube. A Canadian couple went coast-to-coast in a 2017 Chevy Bolt EV before most of us could get our hands on one. See BoltAcrossCanada.com for all the details.

It’s not as smooth to plan as a Tesla, or even as fast to charge as some newer competitors like the Niro EV and Hyundai Kona EV, but you can comfortably cover 500 miles in a day of driving and charge breaks, so it’s undeniably a capable car. Not everyone will want to wait around quite as long as the Bolt EV requires, but the patient and planning sorts among us like that just fine.

On the subject of DCFC, here’s a fast charging issue that Kona Electric and Kia Niro EV owners should know about.

Nor am I some stooge for General Motors, attempting to spin their every electric yarn into gold.

In past articles, I’ve openly said that the Chevy Bolt EV is already outdated and offered constructive criticism to fix it.

The point needs to be made, though, because some arguments against the New York Times article simply suggest that driving a Tesla is the only way to accomplish this trip, which is wrong. A coast-to-coast drive might be open to debate, but this is a 269-mile one-way/538-mile round trip that is frequently completed with ease in a Chevy Bolt EV.

Getting from L.A. to Las Vegas in a Chevy Bolt EV

Here’s the itinerary for this mind-blowingly complicated trip, are you ready?

The observant among us will notice that this is only a one-way trip. How on earth are we going to get back?
Well, assuming you’re spending a little time in Las Vegas – after all, why did you drive there if not? - the Chevy Bolt EV is at least 80% charged by the time you set off again. If you stayed more than a few hours, or overnight, it’s at 100% state of charge.

In any case, all you would need to do is stop at that same Baker EVgo location. Admittedly, the return leg stop might be 30-40 minutes to get a little extra juice for the 177 miles back to L.A. Or you might choose to shorten the Baker stop and add a second brief top-up just outside L.A. before heading home.

Either way, your total charging time in transit barely reaches 2 hours, let alone the 5.5 hours that the article in the New York Times leans on for its deeply misleading headline.

Best of all, you don’t have to take my word or crude calculations for it. For proof, we can look to a real-world demonstration by the News Coulomb channel on YouTube, where a Bolt EV makes a very similar journey without even stopping to charge.

Watch Driving from LA to NY on a Chevy Bolt and Subscribe to Torque News Youtube Channel for Daily Automotive News and Analysis.

This trip occurred last year and sees the driver arrive with 31 miles to spare. Although it begins on the edge of Los Angeles, the remaining miles would get you into the city proper and, don’t forget, this journey involves no charge stops at all as the Baker EVgo site was not yet operational.

Now that Baker EVgo is up and running, not to mention another four stalls at a ChargePoint site going in down the road, that quick rest stop of 20-30 minutes will easily give the Chevy Bolt EV a comfortable top-up to take it on to Vegas.

The Charging Network Is Not Perfect

I have no qualms about admitting that life is different with an electric vehicle.

Close to home it makes life much easier, as you never have to visit a gas station again. On the road, for now, it certainly requires an extra level of planning.

On long trips, it is inevitably less convenient than stopping for gas. For non-Tesla electric cars like the Chevy Bolt EV, there are still some tough gaps as you travel coast-to-coast and many rural areas that lack any kind of charging infrastructure.

Even in a Tesla, with the company’s seamless integration of vehicle with infrastructure and Superchargers reaching for 250kW, it still takes a bit longer to fill up than a regular car you could buy for tens of thousands of dollars less.

While we're on the topic of Tesla, here are 5 Exciting Events Still to Come for the brand in 2019.

However, that isn’t the challenge posed by the NY Times article, which takes a basic one-stop city hop and turns it into a Homeric saga.

Articles like this, despite its relatively even tone and quiet acceptance of the circumstances, serve only to misrepresent electric vehicles and overlook the massive and rapid development underway.

In June 2018, for example, there were less than 10 active Electrify America sites across the entire United States. At the time of writing, just one year on, there are more than 200 fast charging sites live and almost 300 more expected to be installed by the end of the year.

The takeaway for anyone considering an electric vehicle is not an unequivocal yes or no answer, but instead a reminder to ask real-world owners about their experiences, rather than relying on poorly researched one-off reports.

There are various situations where I, an enthusiastic Bolt EV owner, would not recommend the car to others. The low-emissions alternative in those cases might be a plug-in hybrid, a cheaper used EV, or stumping up a bit more money for a Tesla. Even if it doesn’t end up being right for your circumstances, if you’re considering an electric vehicle please seek out advice rooted in deeper real-world experience.

PHEV vs. BEV? Here's my take on how Chevy Volt sales have impacted the Chevy Bolt EV.

What should not lead the decision-making is a half-baked attempt to venture out into the desert, by someone actively looking for circumstances to fit their naysayer’s narrative.

After all, “L.A. to Vegas and Back by Electric Car: 8 Hours Driving and 45 Minutes at a Big Thermometer” wouldn’t attract this much attention, would it?

Check out Torque News on YouTube for extra auto news and come back tomorrow for my latest articles on the Chevy Bolt EV and other electric vehicles.