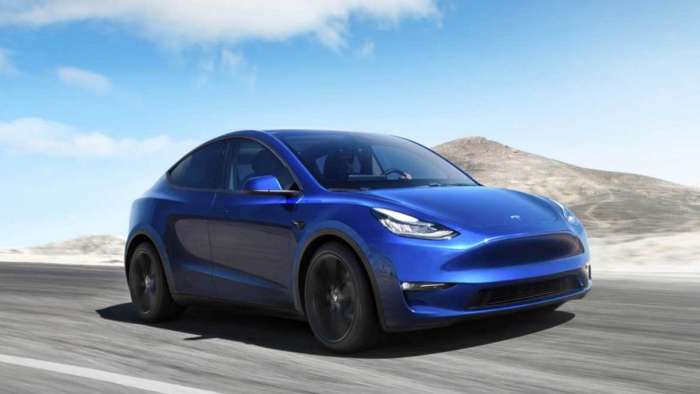 The Chevy Bolt EV has steady sales since its 2016 release, but the Tesla Model Y looms large on the horizon in 2020. Here’s why Bolt EV owners might be tempted to switch.
Advertisement

As another quarter draws to a close, all eyes are once again on Tesla sales. As bears and bulls alike try to pick the bones out of the company’s latest financials, will it be another record quarter or could waning demand for Tesla’s high-end models remain a drag factor?

As for General Motors, unless anything remarkable occurs, the automaker’s electric sales will simply be recorded alongside those of their non-Tesla competitors and the media will move on. Very few headlines, very little fanfare.

That’s because the Chevy Bolt EV has sold steadily, if unspectacularly, over its three years on the market. Sales rarely exceed the low thousands every month, but the car remains competitive in its class even as prices fluctuate, new models emerge, and incentives phase out.

Against that backdrop, how will the 2020 Chevy Bolt EV fare when it has to go head-to-head with the Tesla Model Y next year?

Watch the video below to see how EV sales have changed over the last decade. (Please subscribe to Torque News Youtube Channel for daily automotive news and analysis).

Any comparison of the two first affordable long-range electric vehicles, the 2017 Chevy Bolt EV and Tesla Model 3, is complicated by several factors.

In addition to the Bolt EV being available for more than a year longer than the Model 3, the latter is also a different style of vehicle that is competing on many different fronts. Yes, it has a version that starts at a similar base price to the Bolt EV and the two match each other’s range at that level, but the cars head in different directions from there.

The Model 3 competes more directly with the likes of performance sedans from Audi and BMW, while the Chevy Bolt EV goes up against more compact cars like the Nissan Leaf and, more recently, the Kia Niro EV and Hyundai Kona Electric. The issue is that many of the Bolt EV’s competitors are unavailable in some areas, restricted either by limited production or a focus on selling only in EV-friendly ZEV states.

For context, here are a few ways the Chevy Bolt EV is already outdated, as well as some suggestions for improvements that GM can make.

That makes the Tesla Model Y, assuming it arrives as scheduled late next year, the most likely competitor to the 2020 Chevy Bolt EV in terms of availability and anticipated base price.

Let’s look at some of the reasons Bolt EV owners might be persuaded to make the switch.

For many Chevy Bolt EV owners I hear from, the reason offered for passing on a Tesla Model 3 now that they’re readily available is simple: the Model 3 doesn’t have a hatch. Although it might sound trivial, hatchback design makes a car much more practical.

The Model 3 has a similar capacity to the Bolt EV, but it’s not as flexible. The 16.9 ft³ offered by the Bolt is not only larger than the Model 3’s 15 ft³ but also more accessible. The Bolt might look small on the outside, but it’s deceptively large on the inside. That hatch will swallow boxes, bikes, or even a full IKEA run when you fold the rear seats down.

The Tesla Model Y could solve this common complaint.

Offering the same improved ride height and luggage capacity that distinguishes the Chevy Bolt EV from the Model 3, the Model Y will also bring all the features, performance and range benefits that attract people to Tesla in the first place.

Watch the Plug & Play EV channel summary of why we might choose to switch from Bolt EV to Tesla Model Y in 2020.

The Tesla Model Y will be tantalizingly close to production as many early Bolt EV drivers come to the end of their three-year leases next year. Admittedly, Tesla will probably sell the high-end options first, which will run $50k or more and price out many Bolt EV owners.

Even so, there could be enough motivation to find ways to bridge the gap between the end of a Bolt EV lease and mass production of the Model Y.

For example, Tesla learned a lot with the Model 3’s “production hell” phase last year, so it’s reasonable to assume that more affordable versions of the Model Y will follow quickly after the long-range performance versions.

It’s a big ask for a company with a track record of missing deadlines, but perhaps this time Tesla can get the Model Y out on time to give guaranteed delivery dates. Better yet, if the company can move production runs forward by a quarter to summer/fall 2020, Tesla will be in pole position to scoop up a healthy number of former Bolt EV drivers.

3. The Used Bolt EV Market Will Be Buzzing

As with the previous point, this one depends on how many 2017 Chevy Bolt EVs are returned when they come off lease next year. The used market for the Bolt EV could be buzzing, making it harder to get buyers into the 2020 model unless it has some significant upgrades (more on that next).

By contrast, Tesla has no comparable used market in this vehicle category.

The Tesla Model X brings the SUV form factor, but its price point is more than double what the Model Y and Bolt EV will be. With is complex gullwing doors, the Model X also caters to a very specific segment of tech-forward early adopters.

With that in mind and no real used market to dilute its sales, the Tesla Model Y will be a more distinct offering for buyers willing to stretch their budget to get into a Tesla.

In the end, much could depend on just how aggressive GM chooses to be in pursuing the company’s plans for electrification.

On the one hand, GM could continue its trend of recent years and leave the 2020 Chevy Bolt EV largely unchanged. If so, it will certainly struggle to compete with the Tesla Model Y and, indeed, any other comparable EV from legacy automakers.

Along with the Kia Niro EV and Hyundai Kona Electric, the 2020 Kia Soul EV and even the Volkswagen ID. Crozz could be available by late next year. Without a mid-cycle refresh, an unchanged Bolt EV will continue to look outdated in that field.

On the other hand, GM could surprise us all. It could provide not just forward-thinking changes for the latest Bolt EV, but might also announce brand new models that liven up the market.

GM has plans for 20 new electric models across all of its brands by 2023 and it has to start somewhere. Getting a jump on the competition next year would give existing Chevy Bolt EV owners confidence that the company is committed to electric vehicles and worth sticking with over the long term.

Should GM show a lack of urgency with its EV program, however, there’s one automaker ready to scoop up market share in every category.

The Tesla Model Y is positioned as the car that brings EVs to the masses. It is particularly suitable for families and buyers who value practicality over performance, but who certainly wouldn’t argue if both are on offer. If the Model Y can deliver on its promises and legacy automakers like GM fail to provide a compelling alternative, Tesla will eat their lunch in this vehicle segment as well.

This is a lot of speculation, of course, and the EV sector moves so quickly that any number of factors could change the picture between now and summer 2020.

What we can say for sure is that the options for anyone considering an electric vehicle are becoming broader and more compelling with every passing year, which can only be a good thing for EV adoption.

If you're currently driving a leased Chevy Bolt EV, what are your plans for the end of your lease?

Would you consider another manufacturer for your next EV or do you trust GM to deliver on their plans for electrification?

Let us know in the comments!

Watch Video Report of 4 Reasons Why Bolt EV Owners May Convert To Tesla Model Y and Click to Subscribe to Torque News Youtube For Daily Tesla and Automotive News Analysis.

See you in the next story titled: New Report Highlights Tesla Model 3 and Honda Clarity PHEV for Increased EV Adoption.