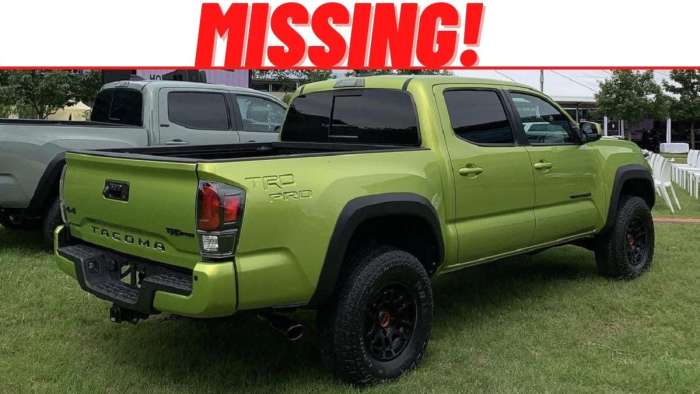 Missing in Action: Where is 2022 Toyota Tacoma TRD Pro?

Where is 2022 Tacoma TRD Pro? Here is what we know.
Advertisement

There is so much to look forward to this year if you are a Toyota fan. Especially if you are a fan of Toyota Tacoma.

This is not a year we will see a 2022 Tacoma redesign, and we will not have a refresh year either.

Oh, and there are changes coming to 2022 Tacoma TRD Pro. 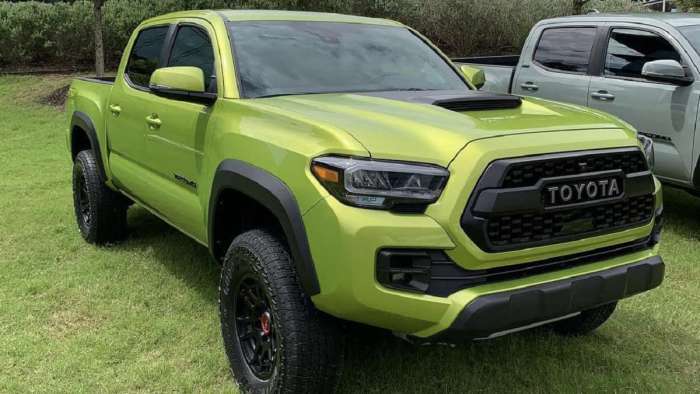 First off, the exclusive color this year for Tacoma TRD Pro is Electric Lime Metallic. I have seen it in person quite a bit already – bright, bold, quirky, unique, and pretty freaking awesome.

And this is not your typical Toyota Tacoma TRD Pro, at least not the same as last year. New suspension upgrades add a front lift of 1.5 inches in the front and 0.5 inches in the back.

Yes, 2022 Tacoma TRD Pro is even more capable and cooler than ever – “trail-worthy” we can call it.

The real question, though, that has been burning in my mind lately is – just where IS Tacoma TRD Pro?

There is a lot of buzz regarding this Electric Lime Metallic Tacoma. I was thrilled when I heard the shocking announcement that Toyota chose a shade of lime for 2022 Tacoma. Well, and the choice of Lime Rush for 2022 4Runner too.

This was back in October, and I used an Electric Lime Metallic prototype for my review. It was incredible. I am still waiting to see my first “retail sale” truck in Electric Lime in person.

When the first 2022 Toyota Tacoma trucks started arriving at dealerships across the country around the later part of 2021, we were told the 2022 Tacoma TRD Pro would be a few months behind. Puzzling but hey, not unheard of.

No word was given for the TRD Pro delay.

Not that this is apples to apples, but 2022 4Runner TRD Pro, including Lime Rush color, have been available for sale for months.

So where is Tacoma TRD Pro? 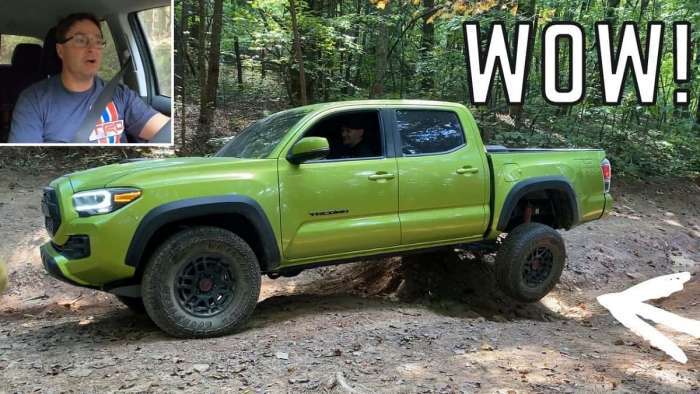 We are now at the beginning of March, and still no signs of Toyota Tacoma TRD Pro for 2022. You can technically build one on the Toyota.com website, but nothing will happen from that point on. At least not right now.

I spoke with an inventory locating manager at a Toyota dealership I know, and they said there is absolutely no news about when dealers can expect to begin filling requests for 2022 Tacoma TRD Pro. Weird.

As for my speculation, I suppose there could be several reasons for this delay.

First, maybe COVID-related production delays and parts shortages along the logistical chain have halted manufacturing. The worldwide vehicle shortage continues pretty much everywhere, so maybe this is just another piece of that puzzle.

Also, maybe Toyota has planned for 2022 TRD Pro Tacoma retail sale for the spring and just not made that detail public yet.

Perhaps it has something to do with a model year change or a new body style plan. Nobody except for the Toyota inner circle knows when Toyota Tacoma will be redesigned. Some say 2023 model year. Others think 2024 is the key number here.

Truth is – nobody really knows yet.

Time for Your Toyota Tacoma Comments

July is only four months away. Will we have another announcement coming soon? What will it be about? I have more questions than answers at this point.

Do you have your eye on a 2022 Tacoma TRD Pro, and if so, what have you heard in your personal experience?

Have your dealerships told you any information or news about your future purchase?

Are you waiting to see when next-gen Tacoma will be announced before making any plans, or are you ready now to pull the trigger?

How has your search for Tacoma or other Toyota models gone in the vehicle shortage era?

Thanks for reading everyone. See you next story when I discuss the wait times to buy a Toyota RAV4 Prime.