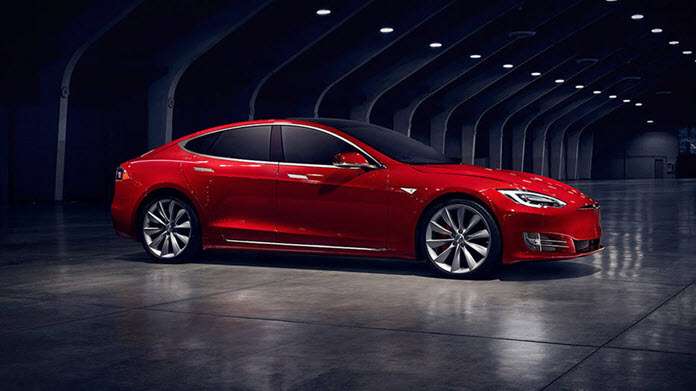 Any imbalance may lead to poor handling, damage to your tires and introduce a lot of stress to the drivetrain. HowStuffWorks has great animated images showing how it operates in action.

Tesla describes the gearing as follows: “The motor is directly coupled to a single speed gearbox, above the rear axle. The simplicity of a single gear ratio reduces weight and eliminates the need for complicated shifting and clutch work. The elegant motor does not need a complicated reverse gear – the motor simply spins in the opposite direction.”

The downside of the open differential approach is that torque is evenly applied to both wheels. The traction control system limits the maximum amount of torque that can be applied to each wheel without making it slip.
Turning traction control off essentially allows the motor to not back down even when one of the tires is spinning. This can often result in a lot of tire spinning and will not necessarily remove you from being stuck. In fact you may end up digging a deeper hole than the one you’re already in.

Traditionally a limited slip differential allows for torque to be applied independently of each wheel. This involves complicated gearing which involves more components, adds additional weight and overall may not be as reliable on a Model S that produces such astronomical torque. For that reason Tesla chose to utilize a much simpler and sturdier open differential. However they needed to solve the slip problem. Tesla solved the problem on the Model S by selectively applying rear brakes in order to transfer torque to the wheel that grips. These commands are fed into the electronic stability control system which is capable of braking the rear wheels independently as a way to improve the handling of the car under various conditions. 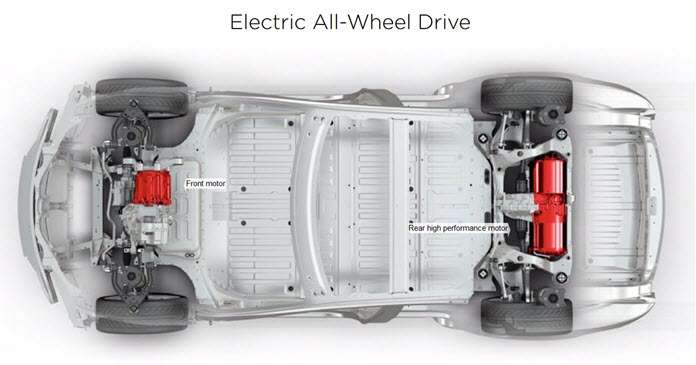 Tesla describes both traction and stability control as follows:

Model S Traction Control is designed to ensure maximum contact between the road and the tires. Whether you are accelerating off the line, zooming along the winding roads of the Rockies or find yourself in a Gulf Coast rainstorm, Traction Control prevents loss of traction and maintains control. Stability Control reacts in moments of under-steer or over-steer by reducing torque and applying the brakes to individual wheels for enhanced control when cornering.

Tesla Motors is about disrupting the norm and re-thinking how things should be done. If you start from scratch and question every design decision, every part, every ounce of weight, every approach and leverage the best minds on the planet, what kind of car will you end up with? The Model S is Tesla’s current answer and certainly not their final answer (think Tesla Model 3).

Tesla’s traction control and emulated limited slip functionality is another case of Tesla replacing complex and inefficient hardware with something lighter, simpler and more state of the art – augmenting functionality through software and algorithmic science utilizing today’s advanced computing power.

The next time you slam that “go” pedal and take off like a space ship, think about all the technology that’s helping you launch into the future.

LG's New EV Battery Plant Is a Welcome News for Tesla
Tesla Giga Berlin's New Hurdle: It's Not Only the Gov't, but Now Tesla Itself
END_OF_DOCUMENT_TOKEN_TO_BE_REPLACED