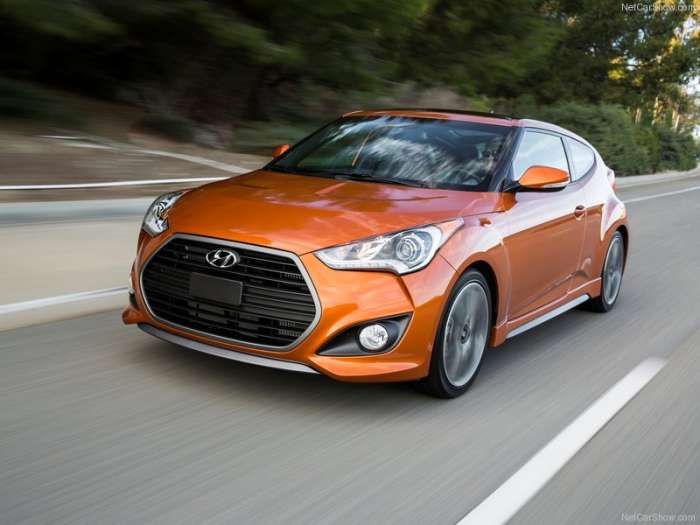 Hyundai Veloster vs Volkswagen GTI: Is This a Wrong Comparison?

The Hyundai Veloster often gets compared to the Volkswagen GTI, but is that a fair comparison? Not exactly.
Advertisement

Back in 2011, Hyundai introduced a weird little hatchback it called the Veloster. Essentially a production version of its 2007 HND-3 concept, the Veloster’s design was unexpectedly stylish, especially for a Hyundai. It also offered a unique layout. While the driver’s side got one door, the passenger side got two doors. So while it had the profile of a three-door hatch, it actually had a lot of the practicality of a five-door.

When it first went on sale, however, the Veloster only made 138 horsepower. Because of how sporty it looked, a lot of people immediately wrote it off for not having enough power to be a Volkswagen GTI competitor. But it was never intended to take on the GTI. Hyundai built the Veloster as an economy car with an extra dose of style. And in that regard, it delivered.

Even when Hyundai introduced the 200-horsepower Veloster Turbo, it was never intended to take on the GTI directly. It had similar power, yes, but Turbo was more of a warmed-up Veloster than an actual hot hatch. If the two cost the same, that would have been a problem, but Hyundai prices the Veloster Turbo well below the GTI.

Is it really fair to compare a cheaper car to a more-expensive car? Not really. Especially when you can buy a loaded version of the former for about the same price as a base version of the latter.

Currently, the most-expensive Veloster you can buy, the Rally edition comes (pretty much) completely loaded at $24,785. Sure, you could add stuff like a cargo net, mud guards, and wheel locks for a few extra dollars, but those aren’t really options in the way that bigger wheels or a touchscreen infotainment system are. It also doesn’t account for any incentives or discounts you might get since those vary so widely.

Anyways, let’s say you want to compare the Veloster Rally edition to a new GTI. Before you add so much as a single option, the GTI will cost you $25,595. Yep, you read that right. A completely stripped-out GTI costs more than a loaded Veloster. Technically, the GTI does come with a free extra door, so that extra cost may be worth it to some people. But if you’re looking to use your new hatchback as a daily driver, a lot of people would rather have the loaded Veloster than the stripped-out GTI. Interestingly, in 2016 VW's GTi was among Consumer Reports' 10 used cars to avoid.

Of course, if you have more than $25,000 to spend, you can definitely load up a GTI well past its base price. At that point, though, your new hot hatch will cost more than $36,000. Will it be a better car than the loaded Veloster? Absolutely. But when one car costs close to 50-percent more than another one, it should absolutely be better. In fact, there should be a significant difference between the two, not merely a minor one.

Even if you don’t load up the VW GTI with every option imaginable, if you only spring for the SE with larger wheels, that will still set you back right around $30,000. And while I’d say the GTI SE is also more fun to drive than the Veloster Rally edition, you’re still looking at a pretty serious price difference. For some people, it’s worth the extra cash. But not to everyone.

Is it really wrong to want a car that offers a lot of value for your money? Of course not. In fact, the GTI is exactly that. At the $30,000 price point, you won’t find a car that’s more fun to drive, more practical, and more premium-feeling than the GTI. Plenty of competitors have it beat in one aspect, but none can beat its all-around excellence.

The Veloster offers a similar experience, only at lower price point. It competes with cars that cost less than $25,000, a segment the GTI can’t even touch. And that’s OK.

Mark Dipko wrote on April 19, 2017 - 11:33am Permalink
Thank you for writing this, it's right on. The Veloster was intended to be different than anything out there and fuel economy, style and technology were it's pillars. The first car to have standard touchscreen, Pandora, Grace note and telematics all standard. CRZ and tC were the targets and it's fair to say Veloster won those battles.
Christopher Wilkins wrote on April 19, 2017 - 7:08pm Permalink
Just bought a Veloster turbo with a manual 6 speed transmission. Has all the extras you need, touchscreen, reverse camera, heated seats, all for less than 20k. It's a fun car to drive with plenty of "get up". Second Hyundai I have owned, won't be the last.
Fausto Montoya wrote on April 19, 2017 - 7:49pm Permalink
I haven'r driven the VW but i can say the Turbo Veloster does move ! I once drove my daughter's 2016 Turbo while taking it back to her in Culver City, Calif. from Ontario after getting it serviced by the dealer and had to go manual to be able tomake a lane change in front of an Infinity and the thing just took of on me ! Wow ! The guy in the Infinity had to take a closer look at the Veloster to find out what it was that left him in the dust after catching up with me ! Wow !