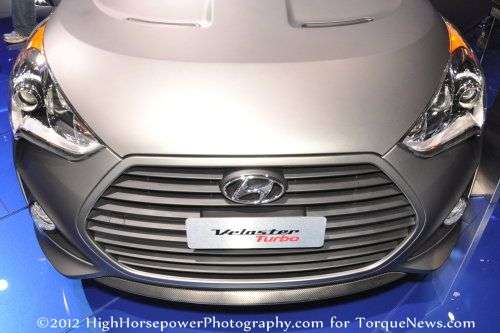 It has been a great year for Hyundai at the 2012 North American International Auto Show with the Elantra taking home the North American Car of the Year but joining that super efficient compact is the new high performance version of the innovative Hyundai Veloster – now packing a turbocharger and over 200 horsepower.
Advertisement

When the Hyundai Veloster was introduced in 2011, the Korean automaker wanted to make a sporty hatchback that offered hybrid-like fuel economy without the high price attached to hybrid models. I have had the pleasure of driving the 2012 Hyundai Veloster and it is a great little car but in an effort to combine sportiness and fuel economy, the 1.6L GDI engine favored the fuel economy end of the spectrum more than being sporty. Don’t get me wrong…with a sport tuned suspension system and 138 horsepower, the Veloster is tons of fun to drive but honestly, the unique 4-door hatchback could use a little more power. While attending the 2011 SEMA Show in Las Vegas, we had a chance to attend a dinner with Hyundai USA CEO John Krafcik where the Hyundai boss confirmed that there would be a turbocharged version of the Veloster that would debut in Detroit and when the 2012 NAIAS opened in Detroit’s Cobo Hall – the world was introduced to the new 2013 Hyundai Veloster Turbo.

The key feature for the 2013 Hyundai Veloster Turbo is, of course, the new turbocharged variant of the 1.6L Gamma 4-cylinder that forces out 201 horsepower and 195lb-ft of torque. This is a substantial increase over the 138hp and 123lb-ft of torque offered in the standard 2012 Veloster, but 201hp also makes the Turbo Veloster more powerful than the Volkswagen GTI or the Mini Cooper Clubman S. Like the non-turbo Veloster, the 201 horsepower turbocharged Veloster will come equipped with a 6-speed manual transmission but unlike the fuel sipping models, the Turbo Veloster will come with a traditional 6-speed automatic transmission rather than the dual clutch unit in the 138hp models – although Veloster Turbo models with the self-shifting transmission will come with steering wheel mounted shift paddles for some added driving excitement. Also, while fuel economy numbers have not been offered for the Veloster Turbo with the automatic transmission, Hyundai expects the Veloster Turbo with the 6-speed manual transmission to yield 27mpg around town and a class-leading 38mpg on the open road – so there is very little sacrifice of fuel economy in order to gain the big power figures.

In addition to packing the 201hp 1.6L GDI engine, the 2013 Hyundai Veloster Turbo also features unique exterior appointments to accentuate the sporty nature of this new hatchback. The Veloster Turbo wears unique 18” alloy wheels, a turbo-specific front fascia that allows for plenty of air flow and a ground effects package that improves the aerodynamics of the Veloster while also bolstering the high performance attitude of the new boosted Hyundai hatchback. The Veloster Turbo also wears a set of unique headlights and taillights, both of which sport LED accent lighting and a pair of bright polished dual exhaust tips announce the presence of the 201hp 4-cylinder turbo engine.

The introduction of the 2013 Hyundai Veloster Turbo should go a long way in satisfying the need for speed without killing the fuel economy measures of this sporty little 4-door hatchback. Now, those who want themselves a Korean “hot hatch” can opt for the Veloster Turbo while those who like the look of the innovative 4-door model but don’t need the big power can opt for the original non-turbo Veloster.

Check out the gallery on the right of the 2013 Hyundai Veloster Turbo and stay tuned to TorqueNews.com for all of your biggest automotive news!