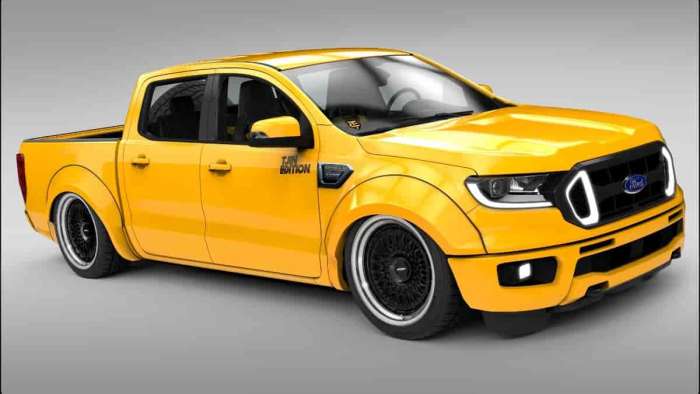 Ford continues to roll out models that will be featured on its SEMA show stand next week in Las Vegas. Ford has the largest OEM equipment display, featuring 50 concept models, at the show.
Advertisement

Since the first autos plowed their way over and through the muddy, unpaved roads and lanes of the country more than a century ago, vehicle owners have tried to personalize their vehicles. Whether the changes were primarily mechanical or cosmetic, owners wanted to make their rides something more than transportation. Because their vehicles meant something much more to owners than simple transportation, owners of that era often tried to add features, and then let the world know of the changes.

Fast-forward to today, and you can easily see vehicle owners want their vehicles to reflect changes that set them apart; changes that define the truck or car to and for the owner. For example, an owner may want to drop in a big engine and transmission so that the pickup becomes a performer’s performer. Or, if their vehicle is a pickup, they may want to add a suspension lift kit, better coilovers, and shocks, swapped out bumpers, and more. They may also want light kits, a winch, fender flares, and more. Plus, they may also want larger wheels and tires (20-inch wheels and 33-inch tires, for example). This list goes on, but the essential idea is the same.

For the Specialty Equipment Manufacturers Assn. (SEMA) show that begins in a couple of days, Ford has included many manufacturers that took the mid-sized pickup Ranger, its F-Series pickups (250/350/450), and its Transit van series and made them into unique vehicles. The manufacturer did this to showcase a wide range of personalization opportunities.

“The automotive aftermarket space continues to grow at a tremendous pace from powerful street machines to the latest trends in overlanding and off-road,” said Eric Cin, global director, Ford Vehicle Personalization and Accessories. “The Ranger and Transit are great fits for this space.” The vehicles are “capable of being modified in countless ways to give owners the flexibility to make their vehicle as unique as they are.”

Ford’s SEMA exhibit is the largest original equipment manufacturer display at SEMA. Ford has more than 50 vehicles at its stand, plus an interactive experience – Ford Out Front – that offers attendees a ride in a Ford Performance vehicle on a closed course. Let’s take a look at three of the Rangers featured at SEMA. For example, the Tijn low-rider Ranger is another example of the many ways that the mid-sized pickup can be super personalized for an owner's tastes.

Ford Performance Parts has put together its take on a Ranger that is ready for overlanding. It is full of parts designed to get you deep into great outdoors.

Advanced Accessory Concepts, meanwhile, has taken a Ranger and has transformed it into an overlanding exploration platform. They used a Ranger XLT model.

The Advanced Accessory Concepts Ranger is ready for off-roading. The development team added AFN bumpers, a skid plate, rock sliders, and a Ford Performance Parts rear differential cover and showcased their Ranger concept’s strength and protection. The AAC Ford Ranger features a conversion at the rear to an AFN aluminum tray bed with canopy. Plus, the AAC Ford Ranger features an Icon 3.5-inch left kit with Vector wheels and Warn Zeon Platinum 10-S winch. Each piece provides you with the ability to go where few folks have been before.

A Tepui Hybox tent and classic ARB 50-quart round out this go anywhere Ranger concept.

RTR Rambler has designed what it believes is the ultimate overlanding and support vehicle for SUV owners seeking not only to enjoy the great outdoors but also to take their adventure to the next level and beyond.

The RTR Rambler Ford Ranger has everything an owner will need to explore the great outdoors way off the grid.