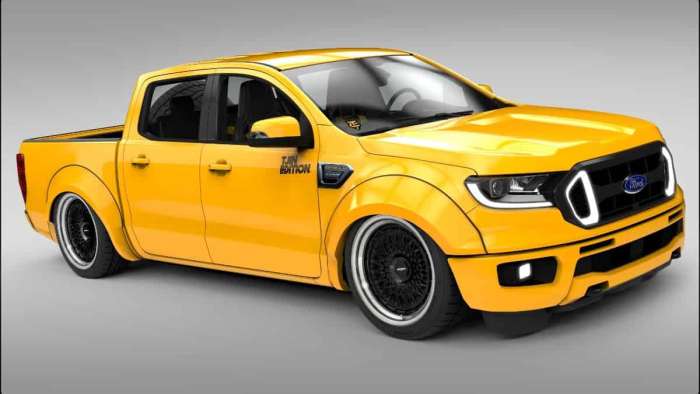 Today most Ford F150s and Rangers are lifted by their owners as the first order of business. Countering this trend, a father-son team of designers has developed a low-rider from the Ford Ranger.
Advertisement

When you look at the Ford Ranger offerings at November’s SEMA show, you quickly realize that most of them feature lift kits. Indeed, Whether it is a two-inch lift or a three- or more inch lift, the pickups are still lifted. There is one Ford Ranger conversion that bucks this trend. It is a street-ready low-rider pickup.

Built by father and son designers, Neil and Colin Tijn, their 2019 Ford Ranger Tijn Edition is a wide low-rider that looks like it is ready to roll up to the start of any street race. For this year’s SEMA show in Las Vegas next month, the Tijns were looking for something different.

Most recently, they developed their RTR Ford Mustang for last year’s SEMA show. This year they looked at the Ranger as they sought to create their unique take on the Ranger. One of the first things that owners of Ford F150s and Rangers do is lift the front ends of their pickups. Generally, the lift is quite mild, 2.5 to 3.0 inches. The lift eliminates the factory tilt that trucks have where the front end is lower than the rear. While lifts are the rage today the Tijns went the other way with their Ford Ranger. SEMA show specials are nearly all lifted. Instead of lifting the front end, they took it to the ground, using an air suspension. They lowered the front end by eight inches, and the rear end by 9.0 inches making the Tijn Ford Ranger a ground-hugger.

Using JR’s Wheels and Tires, the Tijns built a Ranger with a sinister look. The rubber on the wheels was from Falken. The wheels were 20-inch Rotiform LHR-M three-piece wheels.

As to styling changes, they included a set of RTR fender flares, an RTR grille with triangle LED lights, custom BASF yellow applied by L&R Body, plus a one-off wood rear bed floor in black with stainless steel hardware. Providing a dual function – keeping the bed contents dry and out of the sight of prying eyes – the developers used a cover and a PowerTank CO₂ system. There’s more than enough light available from a Rigid lighting kit, as well as Lumens bed lighting.

On the inside, the cab features four reclining Recaro Sportster CS seats, plus Schroth harnesses.

SEMA Is A Major Manufacturer Show

SEMA stands for the Specialty Equipment Marketing Association. This year’s meeting, normally in October, is being held in the early part of November. At the SEMA show, manufacturers have a chance to stand out with special vehicles or equipment that shows their strengths. This year Ford has some Ranger pickups that have been dressed up by various outfits. (refer). SEMA members have also developed some interesting SUVs for the show.
Source: Ford Motor Co.

Marc Stern has been an auto writer since 1971. It was a position that filled two boyhood dreams: One was that I would write, and two that I write about cars. When I took over as my newspaper’s auto editor, I began a 32-year career as an automotive columnist. There isn’t much on four wheels that I haven’t driven or reviewed. My work has appeared in Popular Mechanics, Mechanix Illustrated, AutoWeek, SuperStock, Trailer Life, Old Cars Weekly, Special Interest Autos, and others. Today, I am the Ford F150 reporter for Torque News. I write how-to and help columns for online sites such as Fixya.com and others. You can follow me on TTwitter or Facebook.