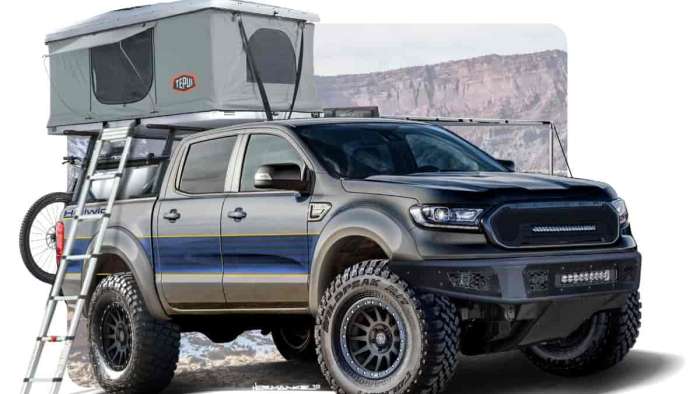 There's a new word in the camping lexicon, it is overnighting. This type of camping, which requires a rugged vehicle, takes you way into the bush where you set up your camp far from any company.
Advertisement

In the last couple of weeks, as we have reported on Ford’s plans and contributions to the Special Equipment Manufacturers Association show in Las Vegas, a new term has crept into many conversations. The particular name is overnighting.

A New Term For An Old Activity

Overnighting seems to be the term that some people in the PR world want us to call camping. Well, if it is okay with them, it certainly is all right with us. We’ll go ahead and subdivide the camping experience by using the word overnight. It will join the far more pedestrian term camping in our offroad lexicon. Here is the way we’ll define things. Overnighting should be reserved for those who head out to remote sites, far from the more civilized world of campsites with amenities.

If you plan to stay at a campground that has amenities like electrical, natural gas hookups, and water service, then we will call that simple camping. If, on the other hand, you plan to visit a site that only deer and woodchucks would know about, then we would call that overnighting. Indeed, overnighting is for a vehicle like the Hellwig Ranger Ford. It is an overnighting concept vehicle developed for the SEMA show this month. Ford calls the Hellwig “the ultimate adventure vehicle for outdoor enthusiasts who value sustainability.”

Looking at the Hellwig Ranger Ford, you can see there’s lots of truth to the manufacturer's statement. For starters, the Hellwig is a deep woods machine. Getting to these locations requires specialized equipment, the type the Hellwig has to offer. For example, it features a 3.5-inch Icon suspension lift, which not only levels the Ranger out, but it also enables it to handle 17-inch Icon Compression wheels. The wheels mount Falken tires. Falkens can easily handle the types of offroading that the Hellwig will be doing – getting to very remote locations on many surfaces. A set of Hellwig swap bars augments the suspension lift kit and keeps handling reasonably neutral. The combination also allows the Ranger to manage some pretty rough country.

A Ford Performance Parts cat-back exhaust, rear differential cover, recovery kit, and Addictive Desert Designs rock sliders and bumpers ensure that the Hellwig makes it to the deep woods campsite. A Rigid lighting set up puts tons of illumination where it is needed when you are driving in the deep bush. An ARB jack and Bushwacker fender flares round out the offroading gear.

A Goal Zero solar power setup makes this offroader special. Using solar power helps users to reduce their carbon footprint even in remote locations. A Tepui hard-shell tent, located in the pickup bed, a Trail Kitchens stove on a bed slide, plus a DC Safety first-aid and roadside assistance kit keep you sheltered and safe offroad.
The Helwig is, as noted, another of the concept vehicles that Ford has readied for the SEMA show this month. We will cover more of the unique custom vans and pickups tomorrow and over the weekend in Torque News.