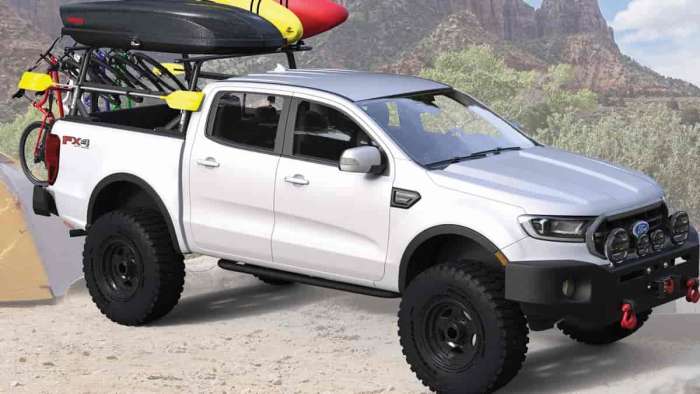 Yakima, a leading aftermarket manufacturer, and Ford have gotten together on a tricked out Ford Ranger for outdoorsy types, the Yakima-Ford Ranger.
Advertisement

Every year, the auto industry gets together in Las Vegas to celebrate creative thinking. Representatives of major manufacturers – OEM and aftermarket – get together to see each other’s creations at the SEMA show. They also roll out their special products. Ford, this year, has rolled out at least three unique versions of the Ranger. Today, we will look at the Yakima Ford Ranger, an all-sports overland special.

Yakima Is A Very Familiar Name

The name Yakima should be immediately recognizable by anyone who is into using their pickup offroad and outdoors. It is a significant aftermarket manufacturer. The fact is that you have probably seen the name more than once in your travels. Yakima makes a popular line of bike racks that mount to a trunk or your Ranger’s or Ford F150’s trailer hitch.

For SEMA this year, the aftermarket giant created the Yakima Ford Ranger. It’s a unique all-sports overland-style vehicle. Its target is Ranger owners who love the outdoors. As to the specs, Yakima used a two-inch front lift kit to level out the pickup.

Most pickups, if you notice, have a definite downward tilt as they leave the dealership. Why they do is known only to the marketing gods, and they are not deigning to tell yours truly why the front ends of nearly every pickup on the market tilt down. I have had more than one owner tell me that the first thing they do after their pickup purchase is final is to install a lift kit to bring the front end up. It’s a welcome change. Of course, it does affect the handling somewhat, but it is manageable with the right combination of tires, wheels, and suspension tweaks.

Pieces Of the Yakima Ford Ranger

Among the other pieces of the Yakima Ford Ranger puzzle are:

The Yakima Ford Ranger has everything you might want to include in a truck that you intend to take way offroad. The pickup consists of RPG bumpers, side steps, and a Warn winch that is up inside the bumper. There’s also tons of lighting, shining where you need it, thanks to a Rigid lighting rig. The wheels are Fuel Recoil off-road wheels that carry 33-inch BFGoodrich T/A KO2 tires.

The bed of the truck illustrates just how outdoorsy it is. There’s a JayLow kayak mount included with a HangOver vertical four-bike carrier and a BackSwing mount.

The great news for Ford Ranger owners is that if they want to order the products included in the truck, they can because Yakima is a Ford Accessories partner, which means that all items installed are available via Ford Accessories so if one source doesn’t have a particular product, the other probably does.

Tomorrow we will look at another Ford SEMA Truck, the Hellwig Ford Ranger.

SEMA stands for the Special Equipment Manufacturers Association. It is the significant manufacturers association for aftermarket and specialty equipment makers.