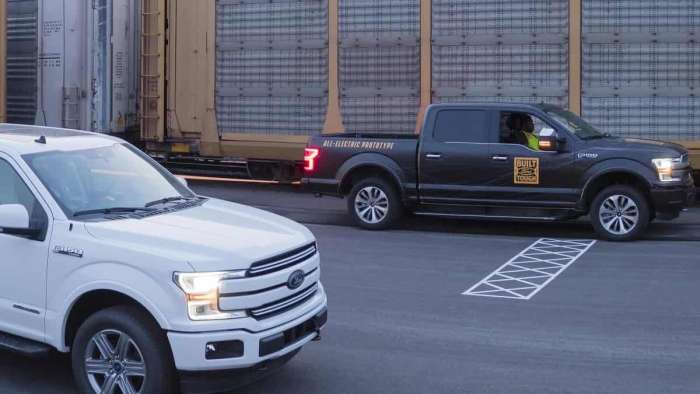 Now that the dust has settled for some weeks, it has become apparent that even gag ads work. The case in point was last summer's ad that touted the number of railway cars a Ford F150 EV could pull. The metrics showed a large spike in interest.
Advertisement

Though Ford has already confirmed that there would be a 2021 Ford F150 EV (Electric Vehicle) and a Hybrid, as well, it has also confirmed there is a market for it. The automaker confirmed the F150 EV at this year’s Detroit Auto Show. Until July, though, Ford didn’t know if there was a market for the vehicle.

However, the now-famous ad showing a prototype Ford F150 EV pulling over 1.2 million pounds of iron and railcars, generated a significant spike in interest.

Torque News has had several articles discussing the 2021 F150 changes. Indeed, it appears as if the Ford F150 EV is the spitting image of the test mule with a couple of exceptions. Instead of having a fuel-filler and gasoline tank cover on one of the rear side panels, the prototype shows its plug-in mounts for charging. Also, the Ford F150 appears to be riding higher than a standard truck to accommodate the battery pack the pickup will use for power.

Interestingly, Ford had great success with the now-famous million-pound pull advertisement that ran early in the summer. As a memory refresher, the ad featured a vehicle that carried the “Prototype” logo quite clearly; 10 railway/car carriers, and a bunch of standard Ford F150s.

In the first part of the ad, the prototype EV lined up in front of 10 empty car carriers, which weighed somewhere south of 1 million pounds. The Ford F150 EV Prototype accelerated slowly from a stop and began pulling the empty car carriers 1,000 feet at an average speed of just over four mph.

And, not to be outdone by itself, the row of Ford F150s that were lineup up front-to-rear down the 1,000-foot rail run was then placed in the car-carrying railcars so that the whole payload was 1.2 million pounds or so. Again, the Ford EV started slowly and pulled away, eventually tugging the now-full rail cars the same 1,000 feet.

Of course, the ad was debunked quickly by publications across the car world, including Torque News, and we all just forgot about the incident and moved on. However, Ford did not. As a result of the ad, Ford ran some internal metrics that had surprising results.

According to Automotive News Canada, an internal Ford study showed that the ad perked up many ears. Indeed, interest in a pickup EV leaped from 10 percent before the spot to 18 percent once it had run.

It makes sense for Ford to bring out a Ford F150 EV and Hybrid in 2021 because that is the year its next-gen pickup design goes on sale.