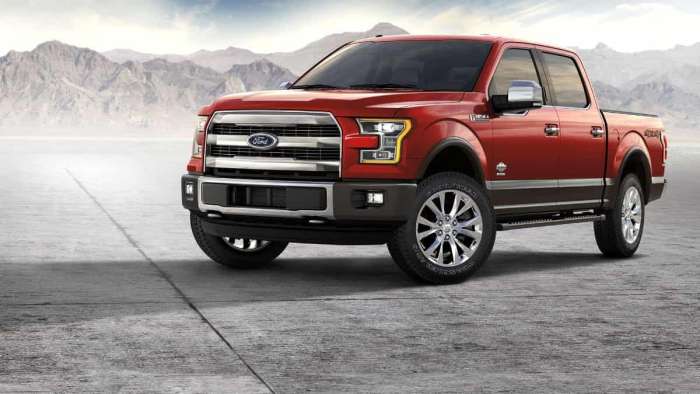 With the 2020 model year about to dawn on the auto industry, it makes sense to be talking about the 2021 models and later. This time car sleuths have found out more information about the 2021 Ford F150.
Advertisement

When the next-generation Ford F150 appears in 2021, there will be a slew of changes, according to the Ford Authority (FA), which has been known to find out a few things before they are generally available. They have done it again.

This time the sleuths found not-so-heavily camouflaged 2021 F150 driving on the public roads. This time the camouflaged F150 mule sports heavy vinyl snap-on camo instead of the black-and-white cover-up material that has become the norm in the auto business. It does a good job of keeping the fine details covered, but, the overall outline is still pretty discernible. The type of camo used on this particular version of the next-gen Ford F150 leaves a lot less to the imagination, though, it does make the pickup seem much larger than it is.

For a start, FA reports that the wheels will be the automaker’s familiar six-spoke design. Also, the wheels sport a bright, polished finish. Moving on from the wheels to the front end, it appears that the 2021 Ford F150 will sport a new grille. Using a three-bar design, the new grille is much simpler in appearance. And, the front end will also feature redesigned headlights with a more straightforward design and changed lighting pattern.

Interestingly, when the first spy shots appeared of the 2021 Ford F150 a bit more than two months ago, the headlights were shown. And, the pickup’s design appeared to be squarer and more upright than earlier models. The prototype that was spotted the other day continues that look. The front end also shows what looks to be a new bumper and air dam.

Sometimes car sleuths get lucky, and they find a prototype where something has been left exposed. That’s the case this time around with the 2021 Ford F150’s rear bumper. According to the sleuths from FA, the new bumper looks “even juicier, thanks to a new rear bumper, left completely uncovered. Deeper character lines enhance the bumper’s natural visual width, which, compared to previous spy shots, looks similar to the design seen on earlier prototype models.”

Watch news about the Ford F150 Pickup News and the latest about its performance Click To Subscribe To Torque News Youtube Channel For Daily Ford and Automotive Industry News Analysis.

The 2021 Ford F150, the 14th generation, will offer new power sources including hybrid power as well as an all-electric motor. These power choices are in addition to the standard lineup of gas and diesel powerplants.

And, there’s more, but we’ll leave that for another time.

Tsingshan's Threat to Tesla: EV Maker Is In Battery Crosshairs
Tesla-Funded Research Reveals One of The Biggest Mysteries of EV Battery
END_OF_DOCUMENT_TOKEN_TO_BE_REPLACED