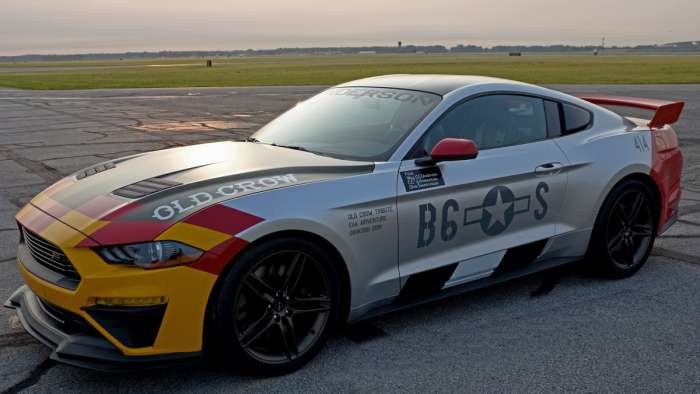 Ford and Roush Racing teamed up on a spectacular Mustang GT. The Mustang looks like an airplane and with 710 horsepower will take you flying down the road.
Advertisement

A little over a month ago, Torque News told you that Ford and Roush were teaming up to build a special Ford Mustang GT to commemorate D-Day. Now we can see the 710-horsepower "Old Crow" Mustang GT and it looks spectacular. The custom Ford Mustang GT honors Colonel Bud Anderson who flew six continuous hours on that fateful day. The Ford Mustang GT carries the same paint scheme as Colonel Anderson’s “Old Crow” P-51 Mustang fighter.

This Mustang is not just a pretty face. It packs 710 horsepower and 610 lb.-ft. of torque thanks to a Roush Performance supercharger. Built by Roush Performance, the “Old Crow” Mustang GT features a custom paint scheme and badging replicating Col. Anderson’s iconic P-51 Mustang fighter plane. A custom Roush grille with P-51 Mustang badge adorns the front, the words “Old Crow” are written on the hood and an authentic Eighth Air Force emblem badge also is prominently featured.

There are a number of other exterior upgrades to complete the package, including Roush rear fascia aerofoils, a Ford Performance front racing spoiler, 2020 Mustang Shelby® GT500® rear spoiler, custom heat extractors on the hood and blue rainbow tinted exhaust tips that emulate the exhaust on the P-51 Mustang planes.

The interior of the “Old Crow” Mustang continues the airplane motif. It features military-themed green leather and canvas and red shifter nob and door handles. “P-51” is written on the passenger-side dashboard. The vehicle includes a four-point harness as well as aluminum rear seat-delete.

The one-of-one Mustang will be auctioned at the Experimental Aircraft Association’s 2019 AirVenture air show on July 25 in Oshkosh, Wisconsin. All proceeds will be donated to support EAA’s youth and adult aviation programs, many of which help prepare the next generation of America’s great pilots.

“Heroes like Col. Bud Anderson have become true living legends in the 75 years since the Allied invasion of Normandy,” said Craig Metros, Ford design director. “Ford is proud to team up with Roush Performance to honor Col. Anderson and all of the brave servicemen and servicewomen who risked their lives during World War II, all while raising funds for the Experimental Aircraft Association, which helps make flying more accessible to America’s youth.”

This is not the first time that Jack Roush has honored Colonel Anderson. Colonel Anderson In 1994, Roush, who used to be an avid pilot, fully re-creating an authentic P-51 Mustang aircraft with the same badging and paint scheme as the Anderson’s “Old Crow” Mustang plane.

“It is truly special to have the opportunity to honor a great American hero and a truly great friend of mine such as Col. Bud Anderson,” said Roush, Sr.. “My father instilled in me a love of aviation and a deep respect for the brave pilots and airmen of World War II. Building this incredible ‘Old Crow’ Mustang, especially to support the next generation of America’s pilots, has been a very rewarding opportunity and one that we’re proud to share with the world.”

The “Old Crow” custom Mustang is the 12th one-of-a-kind Ford that will be auctioned at the Experimental Aircraft Association’s annual AirVenture show in Oshkosh, Wisconsin, with all proceeds benefiting the organization’s youth and adult aviation programs.

How to Bid on the “Old Crow” Mustang GT

The “Old Crow” Mustang GT will be displayed during EAA’s AirVenture show from July 22-28. EAA AirVenture guests can get an up-close look before the car is auctioned on July 25 at the annual EAA AirVenture auction – The Gathering.

Bidding at “The Gathering” auction is open to all interested parties. Bids can be made in person or remotely online.
For more information about the “Old Crow” Mustang GT or for bidding information on “Old Crow,” call 920.426.6573 or email [email protected]

John J wrote on September 13, 2019 - 7:43pm Permalink
I didn't even have to read the article the reason Ford built to 710 horsepower mustang that looks like a P-51 airplane is because Jack Roush gave the okay Jack Roush is an avid flyer and has several little toys stashed away in the garage somewhere in Michigan. With that being said there's the reason if Roush had it it had to be quick and had to be fast and he's a man of his word and Ford has the okay and they're able to build a car similar in appearance.....

Tsingshan's Threat to Tesla: EV Maker Is In Battery Crosshairs
Tesla-Funded Research Reveals One of The Biggest Mysteries of EV Battery
END_OF_DOCUMENT_TOKEN_TO_BE_REPLACED