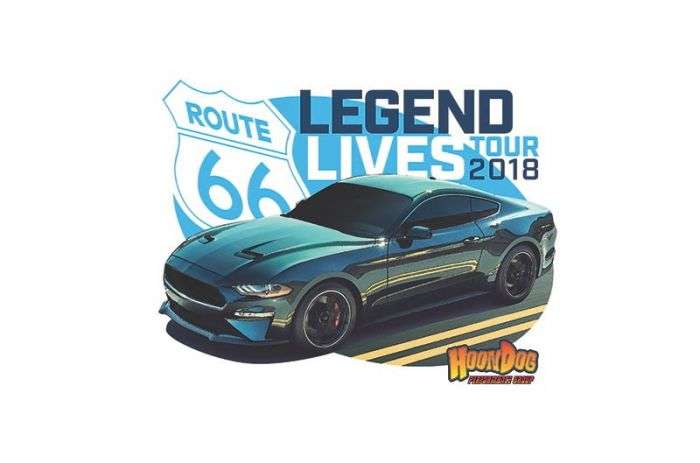 Ford and Ford Performance are sponsoring a drive along the famous Route 66 to honor the 50th anniversary of the Bullitt Mustang. The road trip will extend from Chicago all the way to California. Ford will be supplying two brand-new 2019 Mustang Bullitt prototypes to be included in the road tour.
Advertisement

Ford is helping sponsor a “Legend Lives Route 66 Tour”. Ford is joining forces with the HoonDog Performance Group to drive along Historic Route 66 to celebrate the 50th anniversary of the classic Mustang Bullitt. Ford is calling for a Bullitt stampede along with other Mustangs and collectible Fords. The plan is for the classic Fords to drive the entire length of Route 66 from Chicago to Los Angeles.

Ford says it will supply two brand-new 2019 Mustang Bullitt prototypes to be included in the road tour. The 2019 Bullitt Mustang pre-production units will be displayed at all of the tour’s stops so that fans can check them out. The Ford Performance release does not say that the vehicles will actually be driven, they may just be displayed.

“The 2019 Ford Mustang Bullitt is based on the newest Mustang GT Premium Fastback with the GT Performance Pack, so it comes with a long list of standard features, essentially making it the most well-appointed factory package.

Unique cues of the package begin on the outside, with the familiar Dark Highland Green exterior paint, black 19-inch Torq-Thrust wheels, red Brembo brake calipers, a blacked-out grille and a touch of chrome around the front and side windows. The Bullitt package removes almost all badging from the exterior of this 2019 Mustang, with the only emblem on the outside of the car being the Bullitt-branded faux gas cap between the LED taillights.”

HoonDog already has 60 people signed up to make the cross-country drive.

According to information released by Ford Performance, “The HoonDog Legend Lives Route 66 Tour will take place between May 25th and June 3rd 2018. The tour will feature seven interesting stops along Route 66 as well as a whole host of historic landmarks along the way. HPG will host car Show ‘n’ Shines during their Meet-&-Greet cookouts in Yukon, OK, and Tucumcari, NM, as well as mini car shows at Ford Dealers in St. Robert, MO, Winslow, AZ, and Laughlin, NV.”

The trip will take participants along Route 66 through eight states. U.S. Route is often called the Main Street of America or the Mother Road. It was one America’s first highways, covering a total of nearly 2,500 miles.

According to the release, “The event starts in Chicago, Illinois and ends at the Santa Monica Pier in California. The tour event culminates in Chino Hills, CA, for The Friends of Steve McQueen Reception Dinner on Friday June 1st and the Car Show on June 2nd at Boys Republic, Steve McQueen’s childhood boarding school.”

Ford and HoonDog are inviting all Ford owners and fans to take part in the tour. Ford enthusiasts are invited to join the Bullitt caravan or stop by any of the seven stops on the road trip. Registration is $50.

Information about the Legends Lives Route 66 trip can be found at Hoondogperformancegroup at Weebly.