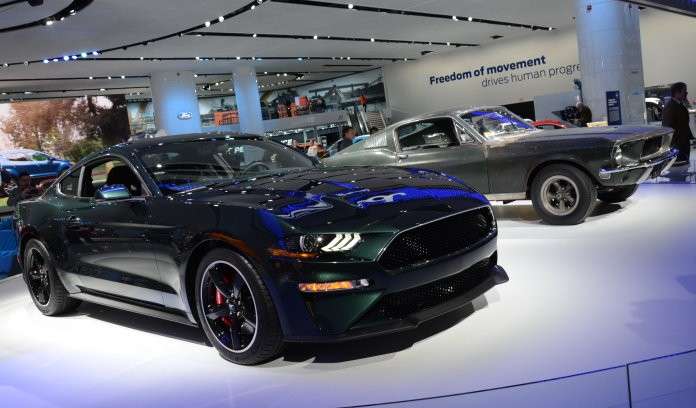 The 2019 Bullitt Mustang Display at NAIAS is Ford's Showstopper

While the debut of the 2019 Mustang Bullitt at the 2018 North American International Auto Show is big news, the way that Ford is displaying the new model alongside the original movie car is guaranteed to draw a big crowd for the duration of the show.
Advertisement

The performance car world has been discussing the rumors of a new Ford Mustang Bullitt edition for almost a year, so when it was announced that the new movie-themed car would debut at the 2018 North American International Auto Show in Detroit’s Cobo Hall, it didn’t come as a big surprise. However, it is a surprise that the new Bullitt Mustang is displayed alongside the actual 1968 Ford Mustang GT from the movie in its unrestored form.

The new Bullitt Mustang production car will draw plenty of people during the Detroit Auto Show, but having one of the most famous Mustang movie cars of all time sharing the stage will make this a star attraction at the 2018 NAIAS.

Unique cues of the package begin on the outside, with the familiar Dark Highland Green exterior paint, black 19-inch Torq-Thrust wheels, red Brembo brake calipers, a blacked-out grille and a touch of chrome around the front and side windows. The Bullitt package removes almost all badging from the exterior of this 2019 Mustang, with the only emblem on the outside of the car being the Bullitt-branded faux gas cap between the LED taillights.

On the inside, the 2019 Bullitt Mustang features black leather seats with green accent stitching, and that green thread is also found on the dash cap, the door panels and the center console armrest. The 12-inch LCD instrument cluster is standard, but the Bullitt package includes a unique start-up screen, and that high tech gauge setup is paired with Ford’s premium infotainment system.

Finally, the most important upgrades of the 2019 Mustang Bullitt package are the go-fast bits. The Active Valve Performance Exhaust system, but the Bullitt package has a unique tone along with new black exhaust tips. A new “Open Air Induction System” mated with an 87mm throttle body, the intake manifold from the Shelby GT350 and an engine calibration help the new Bullitt Mustang make “at least” 475 horsepower – up 15 ticks from the standard Mustang GT. Ford did say “at least” 475hp, so official figures could be higher.

We won’t know the actual power ratings or the pricing for the 2019 Ford Mustang Bullitt until later this year, but this beefed-up, movie-themed Mustang is likely to be a popular option for pony car buyers.

This new package will draw modern Mustang fans, but the 1968 Bullitt Mustang parked next to it will attract a much larger number of automotive enthusiasts. Just to be clear, this is not a 1968 Mustang done up to look like the car from the Steve McQueen movie – this is the actual “hero car” from the movie Bullitt. It has been owned by the same family since the movie studio sold it back in the early 70s, but the current owner was kind enough to bring the car to Cobo Hall to display alongside the 2019 Bullitt Mustang. This is arguably the most famous movie Mustang ever while also being one of the most famous cars in American cinema history, so show-goers are sure to flock to the Ford display to see this piece of automotive history.