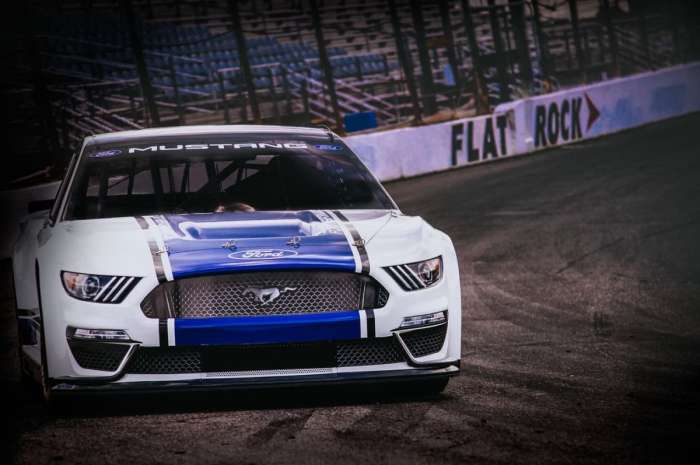 Fans have been waiting to see the new pony car, since Ford announced in April, that it would finally bring the Mustang to the Monster Energy NASCAR Cup Series. The Ford Mustang will make its debut in the top-level Cup Series for the Daytona 500, February 17, 2019.

Ford rolled out the new Mustang for employees at Ford World Headquarters. This caps a week of excitement for Ford that has been celebrating the production of the 10 millionth Mustang. Mustang is the best-selling sports coupe in the world.

Hau Thai-Tang, Ford’s executive vice president of Product Development was on hand to unveil the car. Thai-Tang was born in Vietnam and has been closely affiliated with the Mustang and Ford’s SVT team for nearly 20 years. He was the chief engineer on the 2005 Mustang redesign and told me years ago that he cherishes the freedom that the Mustang represents.

Thai-Tang says “Mustang has raced since it was first sold in 1964. After more than a half-century, it feels great to finally let Mustang run in the top echelon of America’s most popular stock car racing series.”

All 13 Ford drivers currently competing in the Monster Energy NASCAR Cup Series were at the Ford ‘Glass House’ for the unveiling for employees at the company’s World Headquarters, along with team owners and NASCAR executives.

It is one thing to say that the Ford Mustang will become the Ford NASCAR vehicle. Ford Performance and Ford Design teams had to work together to design a vehicle that would look like a Mustang and still meet all of the NASCAR requirements.

Mark Rushbrook, who heads Ford Performance Motorsports says, “Our Ford Performance team has worked hard with the Ford Design team to create a Mustang that will be competitive on the track while remaining true to its proud heritage. We can’t wait to see it winning races in the NASCAR Cup Series next year.”

Ford Design and Ford Performance worked carefully to translate Mustang’s signature style to meet NASCAR rules. This is the 4th body style for the Ford team since the 70’s. Earlier models included the Thunderbird, Taurus and Fusion.

“We look forward to seeing the Ford Mustang, a cultural icon, on the track in the most competitive series in all of motorsports,” said Steve O’Donnell, NASCAR executive vice president and chief racing development officer. “Our sport eagerly anticipates the performance, style and fanfare the Mustang will bring to the track each weekend beginning at the 2019 Daytona 500.”

According to Ford Performance, Mustang has been competing full-time in the NASCAR Xfinity Series since 2011 and has won a championship in all but one season. Ricky Stenhouse Jr. won back-to-back driver’s championships in 2011 and 2012, while Roger Penske has claimed the owner’s title in four of the last five years.

Chevrolet switched its Monster Energy NASCAR Cup Series race car to the Camaro body, this year. Toyota uses a Camry as its race car body. In reality, the race car bodies are mere shells. Even though they are called stock cars, they are stripped of all extraneous equipment like lights, seats, normal safety gear and electronics. The race cars are heavily regulated by NASCAR, when it comes to size, weight and engine size.

Ford race car drivers have been asking for a newer, faster design to compete with the Chevys and Toyotas. Perhaps the change will reinvigorate fans, when the Ford Mustangs take to the track for the Monster Energy NASCAR Cup Series, starting in Daytona, in February.

You can compare the Ford Mustangs with their pony car competitors like the Chevrolet Camaro and the Dodge Challenger here.