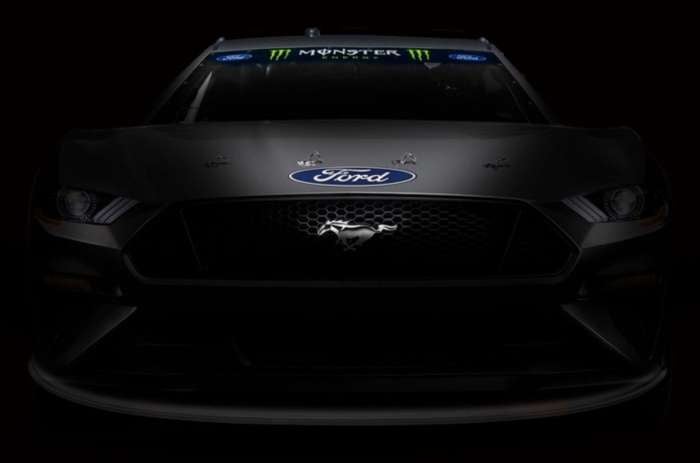 Ford is unveiling its Mustang race car for the NASCAR Cup Series, this week. It may give more clues about the future 2020 Ford Mustang Shelby GT500.
Advertisement

Ford Performance will be unveiling its all-new 2019 Monster Energy NASCAR Cup Series Ford Mustang this week. The big unveiling will be done at Ford World Headquarters in Dearborn, Michigan and it will happen live on the Ford Performance website. The new race car is based on the popular high-horsepower Ford Mustang.

This is the first time that the Mustang will compete in the primary NASCAR races. The new Mustang will start competing next year, beginning with the Daytona 500, in February.

Ford announced earlier this year that the beloved Mustang would replace the current Fusion body style, beginning next year. This will be the fourth body style for Ford, since 1972. Earlier models included the Thunderbird, Taurus and Fusion.

Mustang has been competing in the secondary Xfinity Series since 2011 and has done well. It has won several championships in the Xfinity races.

Ford announced recently that it is eliminating most of its sedans, including the Fusion, while it concentrates on the more profitable trucks, SUVs and crossovers. Ford is keeping the Mustang body style. It is believed that Ford will still produce some Fusions and Tauruses as part of its police car program.

When Ford announced the change to a Mustang for NASCAR, it said that it would be submitting the new vehicle to NASCAR for testing and it would be unveiled once it cleared all of the hurdles. At the time, Mark Rushbrook who oversees Ford Performance said, “We’re combining America’s favorite sports car with America’s top stock car racing series. Mustang is a perfect fit for our racing heritage today and tomorrow.”

Chevrolet switched its race car to the Camaro body, this year. While it has had its ups and downs, Chase Elliott won his first NASCAR race in the Chevy Camaro ZL1, today, on the Watkins Glen road course.

Several of the Ford drivers have grumbled that they needed improvements in their cars to better compete with the faster Chevys and Toyotas. Ford Performance believes that this upgrade will put the drivers in a better position to win on the track.

Ford has just started delivering its latest version of the 2019 Bullitt Mustang. The 475-horsepower muscle car harkens back to the original 1968 Bullitt Mustang, but the new Bullitt has 480 horsepower and costs in the neighborhood of $48,000.

Ford has confirmed that a 2020 Ford Mustang Shelby GT500 is on the way, but has released few other details. Many believe that the new Ford Mustang race car will give a better idea as to what the Blue Oval has on the performance drawing board. Once the new 2020 Ford Mustang is finally unveiled, you can compare it to other performance cars here.

In reality, the race car bodies are mere shells. Even though they are called stock cars, they are stripped of all extraneous equipment like lights, seats, normal safety gear and electronics. The race cars are heavily regulated by NASCAR, when it comes to size, weight and engine size.

The Ford Mustang body may breathe new life into Ford fans and give them new energy for following the 2019 Monster Energy NASCAR Cup Series. NASCAR has struggled to keep fans interested in the competitions, even switching to a different three-segment format to appeal to a younger segment of viewers.

Having one of the most iconic vehicles of all time racing on the NASCAR circuit can’t hurt.

You can join Ford Performance on August 9th for the unveiling of the 2019 Monster Energy NASCAR Cup Series Ford Mustang LIVE from Ford Motor Company World Headquarters in Dearborn, Michigan. It will happen August 9, at 10:00 am, Eastern.