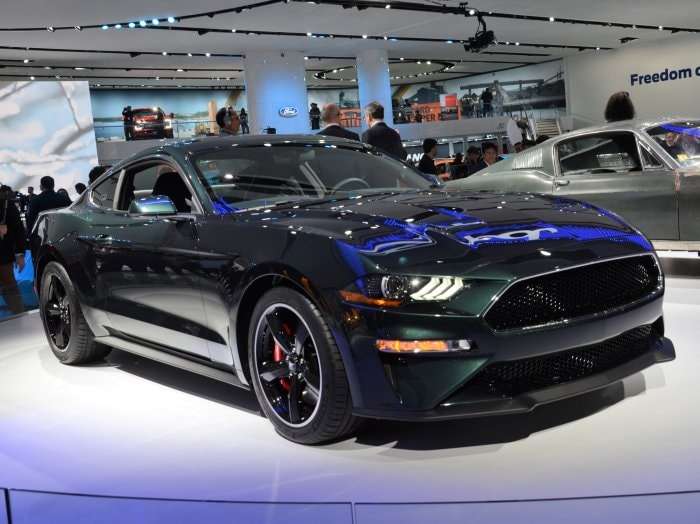 Ford Motor Company announced some official numbers for the 2019 Mustang Bullitt edition today, including a horsepower rating of 480 and a starting price of $47,495 with destination – and you can order your movie-themed pony car today.
Advertisement

The 2019 Ford Mustang Bullitt made its grand debut earlier this year at the 2018 Detroit Auto Show alongside one of the original movie cars. At that time, the Motor Company promised an output of at least 475 horsepower in addition to all of the other package-specific upgrades. Today, Ford finalized the power numbers, along with announcing the price of the new Bullitt Mustang – which also goes on sale today.

“The new Bullitt will be every bit as cool and charismatic as the original ’68 Mustang,” said Corey Holter, Ford car group marketing manager. “Since its introduction earlier this year, Ford dealers have been fielding calls from customers wanting to know when they can order this unique piece of automotive history.”

Official: 480 Horsepower
The 2019 Ford Mustang Bullitt has a long list of unique features, but the most pertinent to this discussion is what the company has changed under the hood. Compared to the Mustang GT, the Bullitt has a unique “Open Air Induction System”, an 87mm throttle body, the intake manifold from the Shelby GT350 and an engine calibration to make the most of those changes.

Back in January, Ford said that the Bullitt would have at least 475 horsepower (and the same 420 lb-ft of torque as the Mustang GT), but with today’s announcement, we learn that it is actually 480 horsepower. That standard Mustang GT offers 460 horsepower, so from the intake, throttle body and induction system, the tune is able to add an extra 20 horsepower.

I would bet that with aftermarket tuning, the Bullitt will make even more power, but that will have to be proven by some of the owners.

Starting Under $48,000
The announcement of the official power and pricing for the 2019 Ford Mustang Bullitt come on the same day that the order banks open, and with a price of $47,495 with destination, the package isn’t all that much more than the Mustang GT Premium.

If you build and price a 2018 Mustang GT Premium fastback with the 6-speed manual transmission, the 401A package (to get the high tech gauge cluster) and the Active Valve Performance Exhaust system, you come to a price of $43,185. This number can be used to loosely figure out that the unique features of the Bullitt package add around $4,300 to the price, but with a unique look inside and out coupled with extra power – plenty of people will be happy to pay this price for this new Bullitt.

Click here for a rundown on all of the specific details of the 2019 Mustang Bullitt.

Order Banks Open Today
While the 2019 Bullitt Mustang isn’t likely to arrive in dealerships for a couple more months, the order banks for these cars are officially open today – March 29th, 2018. This means that you can go to your local Ford dealership and place your order, which will allow you to be one of the first people in the world to have the new Bullitt Mustang when it hits the street this summer.